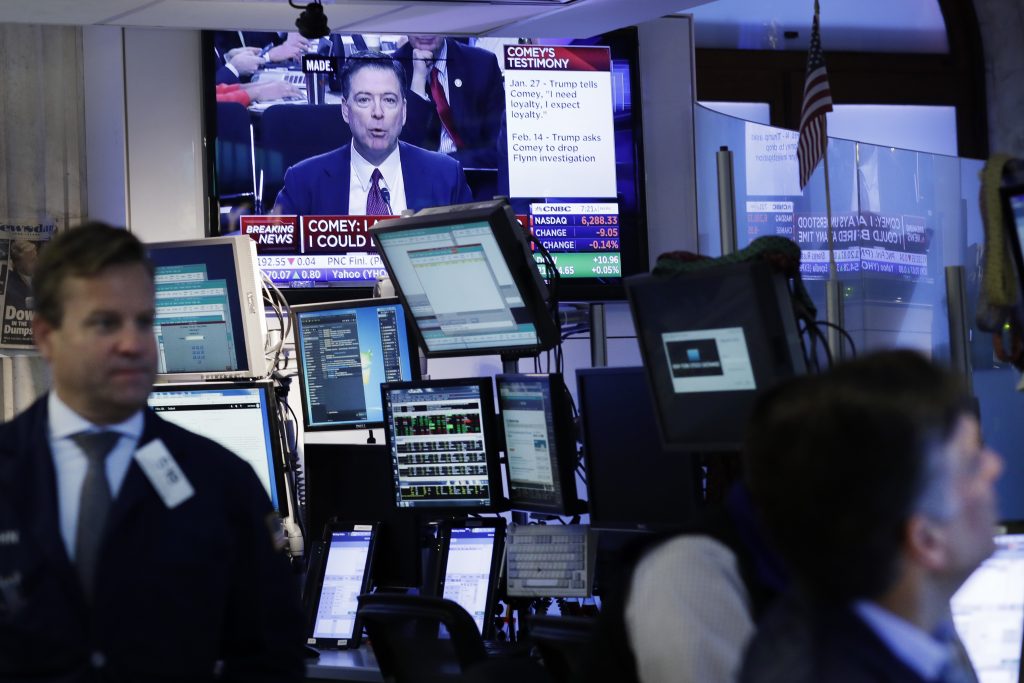 U.S. stocks were higher in early afternoon trading on Thursday after former FBI Director James Comey’s testimony was seen by investors as having no smoking gun that could affect Donald Trump’s presidency.

Comey, who was investigating alleged Russian meddling in the 2016 U.S. presidential election, said he had no doubt that Russia interfered with the election, but was confident that no votes had been altered.

Comey said he was disturbed by Trump’s bid to get him to drop a probe into former national security adviser, Michael Flynn, but would not say whether he thought the president sought to obstruct justice.

Investors were concerned that any major revelation by Comey could dampen already flagging momentum for Trump’s agenda of lower taxes and lax regulations.

Bets that Trump can implement his agenda are partly behind a rally that has taken stock indexes to record highs.

“I think the market is taking less of an alarmist review of this situation because there is no smoking gun here. So it’s not particularly impactful for thinking about … Trump’s economic agenda to go through,” said Thomas Simons, money market economist at Jefferies & Co in New York.

Investors are also awaiting the results of the U.K. general election. Opinion polls show Theresa May’s Conservative Party leading between 5 and 12 percentage points over the main opposition Labour Party, suggesting she would increase her majority.

“The market cares because if Theresa May loses the majority that would be disruptive of the Brexit process,” said Art Hogan, chief market strategist at Wunderlich Securities in New York.

Six of the 11 major S&P sectors were lower, with the defensive utilities index’s 1.04 percent loss topping the decliners.

Nordstrom jumped 10.6 percent to $44.78 after the department store operator said that some members of the controlling Nordstrom family have formed a group to consider taking the company private.