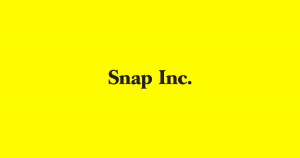 Snap Inc. is the most-shorted tech initial public offering of the year, with a growing number of traders betting the stock will fall.

Investors are skeptical that the company, which owns the Snapchat photo-sharing app, can grow quickly enough to justify its valuation — now at about $23 billion — given aggressive competition from other social media, which has been copying some of Snapchat’s features.

That’s helped drive short interest in Snap up to 28 percent of the free float, or shares available to be traded publicly, according to data from Markit Group Ltd. The increase comes before the first lockup expiration on the shares — on July 30 — when certain stakeholders and executives will be free to unload their positions for the first time since the March 1 IPO.

The stock fell as much as 6.4 percent to $18.31 Thursday in New York, the biggest intraday decline since May 11, the day after Snap’s earnings report showed the company missed user growth and sales estimates. The shares sold for $17 a piece when the company went public in March.

“It looks like short sellers are positioning themselves for a dramatic selloff in Snap’s stock price after the lockups expire,” Anthony DiClemente, an analyst at Nomura Instinet, wrote in a research note on Wednesday.

An investor successfully shorts a stock by borrowing a number of shares from a broker, paying the broker a stock-loan fee and interest for the loan, and then selling the shares at the current share price. If the stock price declines, the investor then buys the same amount of stock at the lower price, returns the shares to the broker and pockets the difference.

DiClemente noted that there are more than $1 billion in Snap shares sold short, and with so few shares left to borrow, the cost to finance short positions has risen to 37 percent, compared with a 1 percent fee in May. The harder it is for brokers to get their hands on shares available to be lent out, the more the stock-loan fee typically increases.

Though the shares are up about 15 percent since the IPO, the percentage of Snapchat currently sold short is about double Facebook’s short interest at the same point — 68 trading days — after it debuted as a public company. At the time, Facebook was facing serious doubts about its ability to make money from mobile advertising, causing the stock to lose half its value in the first six months of trading.

Facebook has since recovered as it mastered mobile ads, and as revenue has surged its stock has more than quadrupled since the IPO. Twitter Inc., which went public in 2013, had short interest of 40 percent at the same number of days after its IPO, and its shares remain about 33 percent below their initial price.

Snap’s stock has the highest short interest of the 14 technology and communications companies that have listed in the U.S. this year. It’s trailed by Carvana Co., at 22 percent of its free float, and Yext Inc., at 19 percent, according to Markit.

While investors can use short interest and options trading as a hedge to mitigate risk on long positions, Snap’s trading is overwhelmingly bearish. The top nine most-owned options are all puts — or contracts that can be exercised if the stock falls below the exercise price.

The January 2018 $15 put options, with an exercise price 23 percent below Wednesday’s $19.56 close, had the highest open interest, which is the number of contracts outstanding, according to data compiled by Bloomberg.