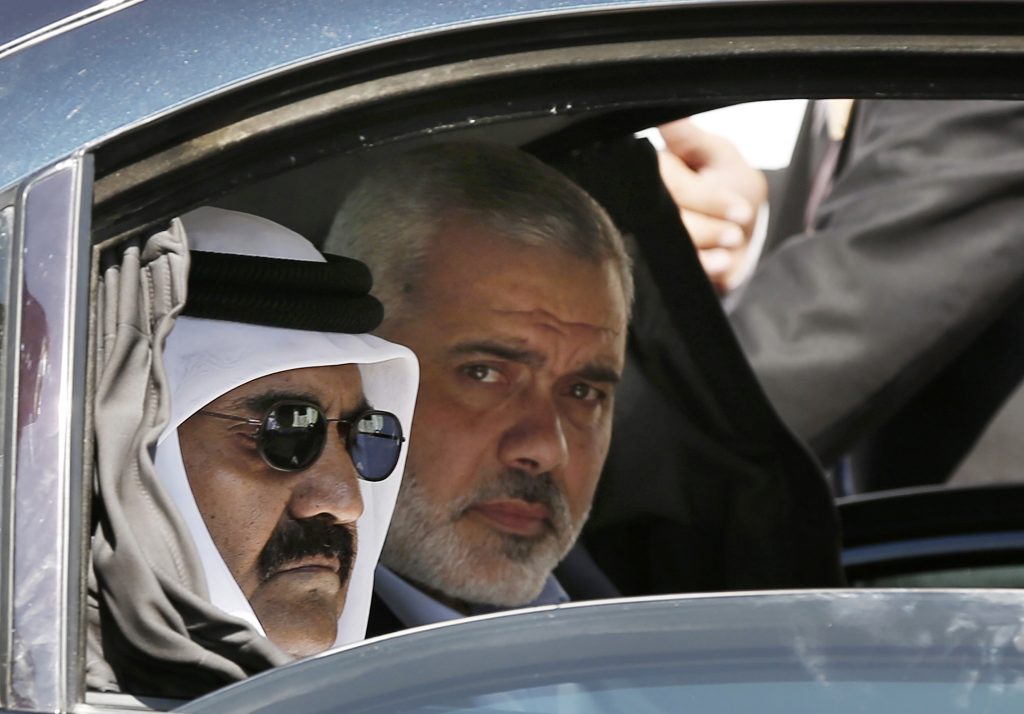 Qatar, one of the few foreign backers of Hamas, faces massive pressure from its Gulf neighbors to cut ties with the Islamic militant group. If it does, the result could be disastrous for Hamas-ruled Gaza.

Qatar has invested hundreds of millions of dollars in roads, housing and a major hospital in the tiny territory. Its infrastructure projects are one of the few job-creators in a devastated economy.

Gaza already suffers from an Israeli-Egyptian blockade, widespread destruction from a string of Israel-Hamas wars, economic misery and chronic electricity shortages. For Hamas, Qatar’s money pumping into the economy is a vital lifeline bolstering its rule.

Qatar appears to be weighing its options. The mere prospect of losing Qatari support prompted Hamas on Wednesday to issue rare criticism of Saudi Arabia, which has been leading the campaign against its tiny Gulf neighbor.

Hamas official Mushir al-Masri said the Saudi call for Qatar to cut ties with the Palestinian group is “regrettable” and contradicts traditional Arab support for the Palestinian cause. He accused Saudi Arabia of siding with “American and Zionist calls to put Hamas on the terrorism list.”

Saudi Arabia and three other Arab states cut ties with Qatar on Monday, accusing it of supporting violent Islamist groups across the region, including Hamas. Saudi Foreign Minister Adel al-Jubeir said Qatar must sever its ties with Hamas.

Qatar has denied the allegations. But its small size and reliance on food imports from Saudi Arabia could make it susceptible to the pressure.

This could spell trouble for Hamas. The group — which calls for Israel’s destruction, even if it has offered long-term interim cease-fires — is considered a terrorist group by Israel and its Western allies. Israel and Hamas have fought three cross-border wars that caused large-scale damage in Gaza.

Qatar doesn’t support Hamas directly, but its large-scale projects have significantly eased the burden on Hamas authorities and given it some credit for bringing this money to Gaza.

In 2012, Qatar’s then-emir, Hamad bin Khalifa Al Thani, visited Gaza, the first and only head of state to do so since Hamas seized control of Gaza from the forces of Palestinian President Mahmoud Abbas 10 years ago. The emir announced a grant of $407 million for humanitarian projects.

The grant is being used to build a housing complex of 3,000 units. Two phases of the project have been completed and families moved into their new houses in the complex, dubbed the Hamad Residential City in the southern Gaza town of Khan Younis.

Last month, Palestinian contractors and Qatari envoys signed deals to start the third and final phase of Hamad City. Now, those deals could be in question.

Using that grant, Qatar also built a specialist prosthetic center, the first of its kind in Gaza. Qatar paved roads, repaired or rebuilt mosques and oversaw dozens of other infrastructure projects.

Qatari Ambassador to the U.S. Meshal bin Hamad Al Thani, told The Associated Press in an interview that his country’s work in Gaza is “purely humanitarian.”

“All our contacts are very transparent, and they are clear, in coordination with the U.S. and the Palestinians and the Israelis. We don’t understand where the problem is,” he said.

Following a 50-day war between Israel and Hamas in 2014, Qatar was the largest single donor to the reconstruction of Gaza, pledging $1 billion at a Cairo-hosted international conference.

So far, Qatar has delivered just $50 million of this pledge for rebuilding 1,000 houses.

Qatar also helped pay for fuel deliveries from neighboring Israel, which, despite its enmity to Hamas, supplies energy to Gaza for what it says are humanitarian reasons. But in an ominous sign for Hamas, Qatar stopped the energy payments for the past two months.

It is unclear whether the payments were halted under Arab pressure.

On Wednesday, bulldozers with Qatari flags were seen leveling land overlooking Gaza City’s coastal road. The spot is supposed to house the headquarters of Qatar’s Gaza reconstruction mission and a residence for an envoy.

In Hamad City, new shops and stores are opening, including a pharmacy named Qatar, barber shops and a video cafe as more families move in. The complex is the largest in Gaza.

Wael al-Naqla, a contractor, has won a bid to build several buildings in the final phase. Thanks to Qatari money, he is one of the few businessmen who can hire workers in today’s Gaza.

“Without these projects, we would have been idled long time ago,” he said, voicing fears that the funding could soon dry up. “We are afraid I won’t be able to keep paying for my 20 workers and they will not be able to eat.”

The construction is one of the few bright spots in Gaza.

As the Islamic group marks its 10th anniversary in power, the situation is grim. The territory suffers from rolling power cuts, with just four hours of electricity at a time, followed by 14-18 hours of outages. Tap water is undrinkable; youth unemployment is estimated at 60 percent. Thousands wait for a rare chance to exit the blockaded territory.

Unable to offer a remedy, Hamas has jailed people who dare to criticize it. A new political program that Hamas hoped would mollify the West and Arab nations instead underscored its ideological rigidity. While softer in tone, the document reaffirmed a call to armed struggle and its goal of eliminating Israel.

This week, a high-level Hamas delegation was summoned to neighboring Egypt, which has had cool relations with Hamas. “If these talks don’t lead to new understandings getting Hamas out of its difficult political situation, I think there will be more crises,” he said.

One person who could benefit from Hamas’ troubles is Abbas, who has repeatedly failed in talks with Hamas to regain control of Gaza.

Abbas recently reduced the salaries of his former employees in Gaza and threatened to scale back payments for Gaza’s electricity — attempts to pressure Hamas. Abbas’ government, which maintains good ties with Qatar, has not commented on the latest crisis.

Chagai Tzuriel, the director general of Israel’s Intelligence Ministry, said Hamas’s many troubles have put it in a “strategic bind.”

“I think they are under greater pressure now than before,” he said.