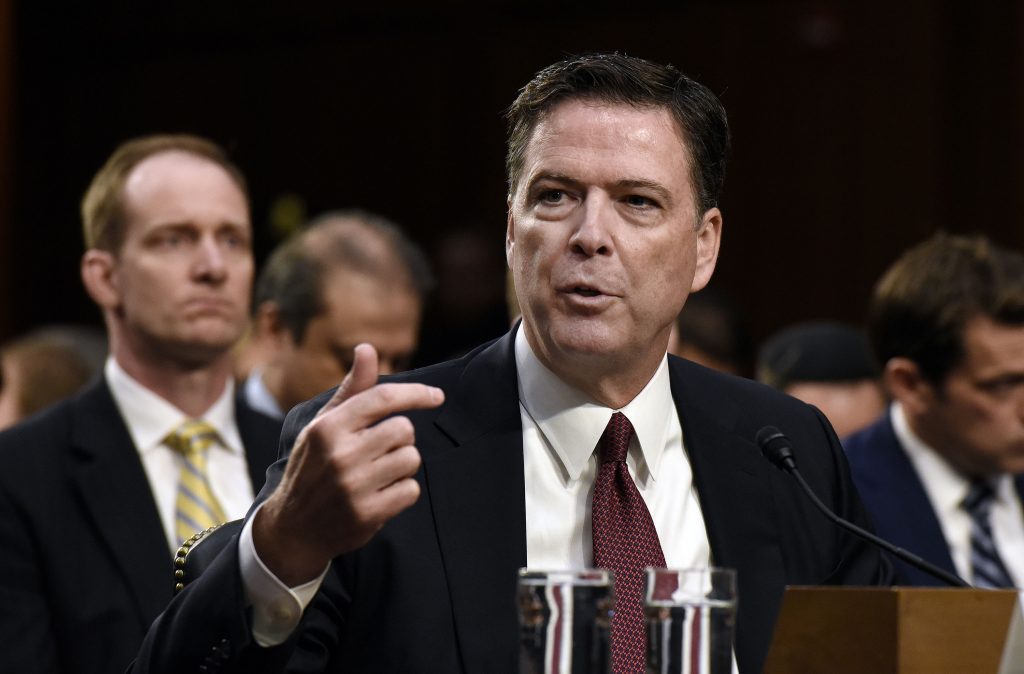 Former FBI Director James Comey said Thursday that he helped reveal details of his private conversations with President Donald Trump because he thought doing so would spur the appointment of a special counsel to investigate the administration – a remarkable admission showing the degree of concern he had about both Russian interference with U.S. politics and his doubts about the Justice Department’s ability to probe such activity.

Testifying before the Senate Intelligence Committee, Comey described how details of his private memos about his one-on-one conversations came to light shortly after his dismissal.

“The president tweeted on Friday after I got fired that I’d better hope there are not tapes,” Comey said. He said he woke up on Monday thinking that if there are tapes, there might be corroboration of Comey’s account. Comey said he asked “a friend of mine to share” a memo he had written about his conversation with Trump “with a reporter.”

Comey said the memo was one he had written about his Oval Office conversation with Trump in which the president had expressed a desire that the investigation of former national security adviser Michael Flynn be dropped.

He said the person he asked to share the information was “a good friend of mine” who is a professor at Columbia Law School. “I thought it might prompt the appointment of a special counsel.”

Asked by Sen. Roy Blunt, R-Mo., why he felt he had the authority to do that, Comey replied: “As a private citizen, I felt free to share that. I thought it was very important to get it out.”

Comey said he used someone else to share the information because he was worried, with reporters camped out at his home, that giving the information to a reporter directly “would be like feeding seagulls at the beach.”

The friend is Daniel Richman, a former federal prosecutor who confirmed his role but declined further comment. The reporter is Michael Schmidt of The New York Times, who declined to comment.

A special counsel was appointed – Robert Mueller, who is a former colleague of Comey’s – and Comey has provided him with his memos, he testified Thursday.

Comey said he still has no idea whether the president actually has tapes of their conversations, but said, “I hope there are and I will consent to the release of them. . . . The president surely knows whether he taped me, and if he did my feelings aren’t hurt.”

Comey also blasted the Trump administration for bad-mouthing the bureau and his leadership to justify his firing, saying, “Those were lies, plain and simple”- a stark challenge to the president’s rationale for his ouster.

“I know I was fired because something about the way I was conducting the Russia investigation was putting pressure on [Trump],” he said.

Those remarks are the strongest suggestion yet that Comey feels the president may have obstructed justice in firing him, though when asked to answer that specific question, Comey declined, saying that was a decision to be made by the special counsel.

A former federal prosecutor, Comey said he took detailed notes of his private talks with the president, a practice that was a departure from his practice with Trump’s predecessor, President Barack Obama. Comey said he did so because he wanted to make a clear record of what was said.

He said he took copious notes because he was “honestly concerned” that the president might lie about what had been said in their meeting. He kept doing so for future conversations, and the two spoke in private a total of nine times before Comey was fired, he said.

Comey sat grim-faced at a witness table before the Senate Intelligence Committee shortly after 10 a.m. as the committee chairman, Sen. Richard Burr, R-N.C., began the hearing by calling for a “very open and candid discussion” about the “strained relationship” between the president and Comey. Comey’s written account of those discussions, made public on Wednesday, have fueled the debate over whether the president may have attempted to obstruct justice by pressuring the FBI director about a sensitive investigation.

“This is not a witch hunt, this is not fake news,” said the senior Democrat on the panel, Sen. Mark R. Warner of Virginia. “This is an effort to protect our country from a new threat that quite frankly will not go away anytime soon.”

Comey began his testimony by saying he became “confused and increasingly concerned” about the public explanations by White House officials for his firing on May 9, particularly after the president said he was thinking about the Russia investigation when he decided to fire him.

He wasted little time repudiating White House statements that he was fired in part because of low morale among FBI employees, and those employees’ supposedly soured attitude toward his leadership.

“The administration then chose to defame me and more importantly the FBI by saying that the organization was in disarray, that it was poorly led,” Comey said. “Those were lies, plain and simple. And I’m so sorry that the FBI workforce had to hear them, and I’m so sorry the American people were told them.”

The former director also said that Attorney General Loretta Lynch asked him last year to refer to the Clinton email probe as a “matter,” rather than an “investigation.”

Comey said he was concerned by Lynch’s direction to refer to it as a “matter” because the wording too closely tracked how the Clinton campaign was trying to describe the FBI investigation.

The former FBI director said he thought the wording used by Lynch “looked silly” but decided it was “not a hill worth dying on.”

But, he acknowledged, “it gave the impression that the attorney general was looking to align the way we talked about our work with the way the campaign” was referring to it. “That was inaccurate,” he said. “That gave me a queasy feeling.”

Comey wrote in his testimony that Trump told him that “I need loyalty, I expect loyalty” in a private White House dinner conversation in January.

“I didn’t move, speak, or change my facial expression in any way during the awkward silence that followed,” Comey wrote. “We simply looked at each other in silence. The conversation then moved on, but he returned to the subject near the end of our dinner.”

Comey said the conversation, in which Trump raised the question of whether Comey intended to stay as FBI director, despite their three prior discussions about him doing so, raised concerns in his mind.

“My common sense told me what’s going on here is he’s looking to get something in exchange for granting my request to stay in the job,” Comey testified.

In testimony broadcast live nationally – some people even held viewing parties in taverns – Comey described his state of mind as he tried to navigate a series of awkward conversations with the president about the investigation into possible coordination between Trump associates and Russian operatives.

Comey made clear he felt the discussions were problematic and improper, in that Trump repeatedly pressing him about specific investigations that involved people close to the president.

After his January dinner when the two discussed loyalty, Comey and the president had another discussion in February at the White House. A number of senior officials met in the Oval Office on Feb. 14 to discuss terrorism. At the end of the meeting, according to Comey, the president asked everyone to leave but Comey.

Attorney General Jeff Sessions and Trump adviser Jared Kushner lingered until the president told them, too, to leave, Comey said.

“My sense was the attorney general knew he shouldn’t be leaving, which is why he was lingering,” Comey said. “I knew something was about to happen which I should pay very close attention to.”

Once they were alone, the president told Comey he hoped he could let go of the investigation into Flynn, who had been forced out as national security adviser a day earlier.

“When it comes from the president, I took it as a direction,” Comey said. He said he was shocked and concerned about the president’s request, but decided not to tell Sessions about it because he expected Sessions would soon recuse himself from the Russia probe, which he did soon thereafter.

After the meeting, Comey approached Sessions and asked him to prevent any future direct interaction between Comey and the president – to not be left alone in a room with him. Comey said Sessions did not reply.

Following Comey’s testimony, Trump attorney Marc Kasowitz read a statement to the press. The full text of his statement can be viewed here.