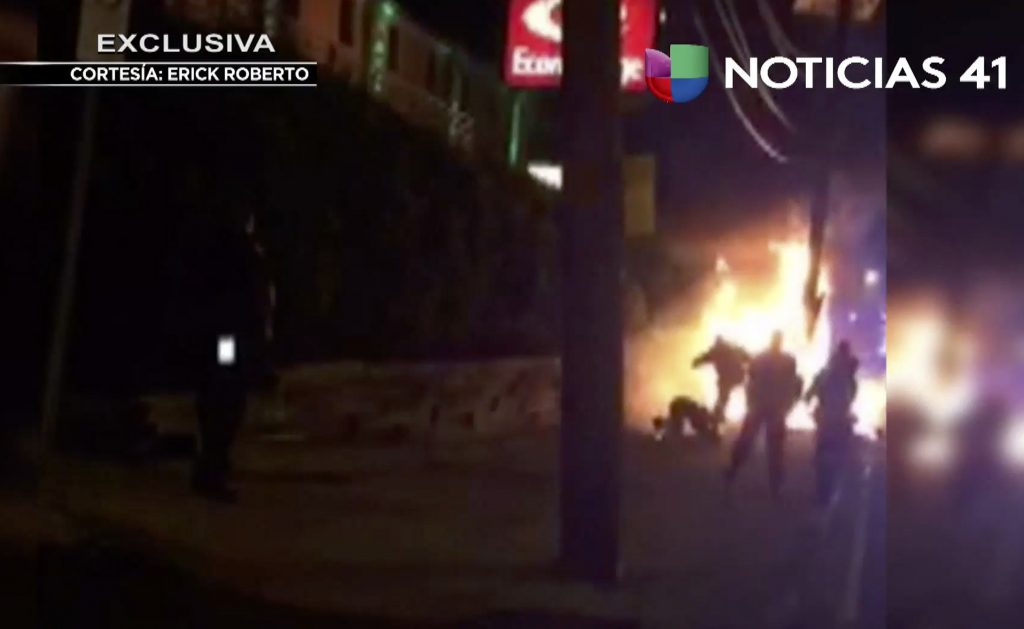 A burning bystander seen on video being kicked by New Jersey police officers after a car chase involving a different man ended in a fiery explosion was in critical condition Thursday and the Jersey City mayor vowed to pursue charges against the officers.

The video obtained by Univision shows police kicking at a man and dragging him into the roadway in the moments after the crash at about 11 p.m. Sunday

A police union official said the video “clearly shows” the officers acted quickly to extinguish the flames and pull the man to safety.

But Mayor Steven Fulop called the images in the video “outrageous” and took issue with the union’s statement, saying that while the dragging of Miguel Feliz, of West New York, New Jersey, could be explained as the officers’ trying to get him away from the fire, what followed defied explanation.

“The kicking and the abuse that happened after — there’s really no credible explanation that makes any sense whatsoever,” Fulop said.

Feliz’s brother, Ramon Feliz, told Univision that he recognized his brother in the video by the way he got out of his car. He said he couldn’t understand how the officers could have confused him with the suspect they were pursuing.

“If you are on fire, if you are burning, do whatever you can to fix that first, and then you can solve the problem at hand,” he told the TV station. “There was a confusion. Anyone can get confused, but how can you tell me that police were not able to identify who is who?”

The mayor said Feliz was to undergo surgery Thursday morning, and said the investigation has been referred to the Hudson County Prosecutor’s Office. A spokeswoman at the St. Barnabas Hospital burn unit said Thursday that Feliz was in critical condition.

Fulop said multiple officers were involved in the chase, including supervisors as well as new officers, and numerous protocols may have been violated.

“There are poor judgment decisions that came one after another through the entire process,” he said. “The incident had a six-mile chase throughout Jersey City, and there’s protocols on that. They fired their weapons from their car at another moving vehicle, and there are issues with that. There are issues with how they continued the chase after receiving additional information, and obviously there are issues around what you see on the video.”

The union representing police officers, the Jersey City Police Officers Benevolent Association, said the officers were trying to put out the flames and get the man to safety.

“Taking swift action isn’t always elegant, but this video clearly shows that the officers acted quickly to extinguish the flames, and pull this man out of harm’s way,” union president Carmine Disbrow said in a statement Wednesday.

County Prosecutor Esther Suarez announced Wednesday afternoon that investigators from her office have reviewed the video and “believe with certainty” that Feliz wasn’t involved in the chase.

The driver who authorities say was being pursued, a 48-year-old Jersey City man, has been charged with eluding and aggravated assault.