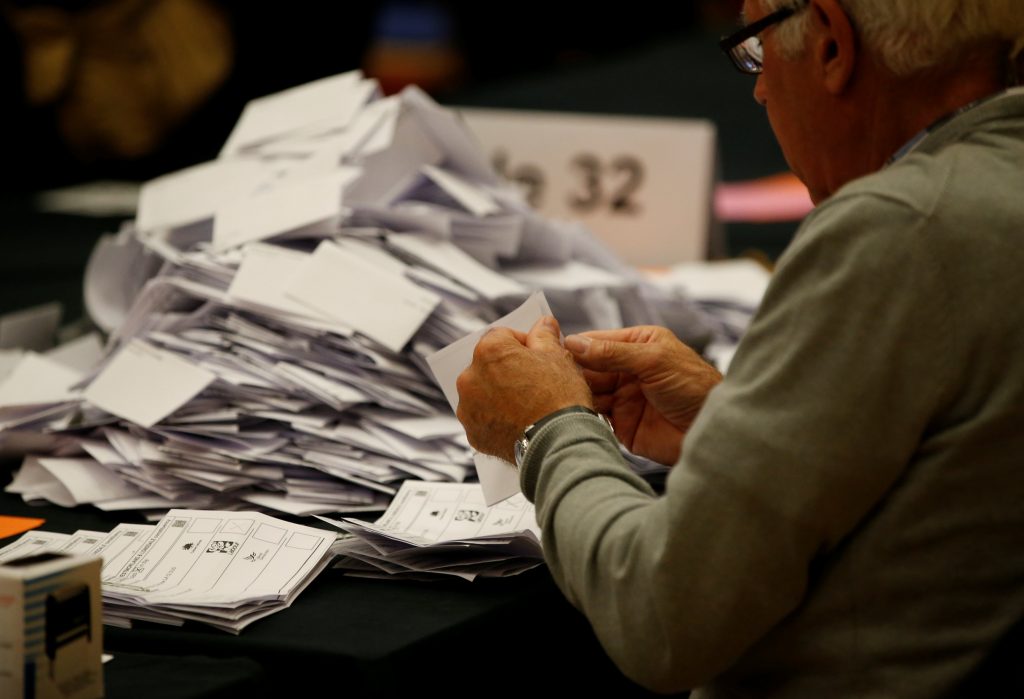 British Prime Minister Theresa May was locked Thursday in a surprisingly tight contest with Labour Party leader Jeremy Corbyn that could test her grip on power, according to exit polls released after voting ended in the country’s second parliamentary election in the past three years.

The results, if confirmed, would mark a stunning setback for May, who had called the vote to strengthen her hand before Brexit talks but could emerge grievously weakened.

The exit poll showed May’s Conservative Party winning 314 seats in Britain’s 650 member Parliament, leaving it short of the total needed for a majority and 17 behind the number it won in 2015. The Labour Party was projected to win 266 seats in Parliament, up 34 seats from the results two years ago.

The results raise questions about whether either major party will have enough support to form a government without resorting to forming a coalition – a scenario known as a hung parliament.

If it comes to that, it’s far from clear which parties would team up, or under what arrangements. A so-called “progressive coalition” – including Labour, the Liberal Democrats, Scottish and Welsh nationalists and others – may have as many seats as the Tories. But the Conservatives would also have potential coalition partners if they fall short of a majority, including unionists in Northern Ireland.

Although exit polls have been imprecise in past elections, they are seen as a fairly reliable guide to the overall results. Official tallies will stream in through the night in Britain, with the final outcome not known until early Friday local time or around midnight EDT.

The exit poll results, if accurate, will draw renewed scrutiny to May’s choice to gamble by going back on repeated promises not to call an election before the one that had been due in 2020. They could also leave Britain rudderless just as what are sure to be contentious talks are due to get underway with European leaders over the terms of Brexit.

May in April broke her vows not to call a snap vote, telling the country that she needed a stronger mandate from the country before she begins Brexit talks.

The election follows a turbulent campaign that was interrupted by two mass-casualty terrorist attacks, and that had been marked by a faltering performance by May even as Corbyn exceeded expectations.

Despite security concerns, the election unfolded peacefully from the remote Scottish isles to the bustling lanes of London, with Britons using stubby pencils to mark their ballots at schools, church halls, pubs, railway cars, and other voting sites nationwide.

When May called the vote, observers hailed the move as a cunning bit of political strategy and predicted she would win in a landslide that could deliver her the sort of overwhelming parliamentary majority that predecessors Margaret Thatcher and Tony Blair had enjoyed.

In the final days of campaigning, polls showed the Tory lead withering to as little as a single point.

May helped her cause by consolidating support not only among those who had favored Brexit in last year’s referendum, but also voters who, like May herself, had backed the “Remain” cause but have pivoted since the vote to accepting the outcome and focusing on how to get the best deal out of Europe.

Miranda John, a 52-year-old mortgage broker who lives in south London and was one of the first to vote after polls opened at 7 a.m., said she voted for May’s Conservative Party “because of fears of Brexit” and her belief that the Tories have “a better negotiation team.”

“I was a Remainer,” she said, referring to the E.U. referendum held last June. “But I accept that the will is to leave so we need to get the right deal.”

Negotiations with the remaining 27 members of the E.U. are due to kick off in a little over a week. Assuming May is still leading Britain by then, she faces long odds in delivering the successful exit that she’s promised.

May has vowed a hard break with the bloc that leaves Britain outside the single market, the customs union and the European Court of Justice. But she has also promised to deliver a free trade deal that will preserve the best elements of membership without many of the onerous burdens.

If she prevails, May will also be under pressure to deliver on pledges to expand the powers of police and other security services following three mass-casualty terrorist attacks this spring, including two in the midst of the campaign.

On May 22, a suicide bomber killed 22 people – including numerous teenage girls — at the conclusion of a concert in Manchester. In London, eight people died following a van-and-knife rampage around the bustling London Bridge area last Saturday.

After that latest attack, May said “enough is enough” and promised a sweeping review of the nation’s counterterrorism rules, with an eye to giving authorities more power to lock up the kind of peripheral figures in extremist circles who have been responsible for the recent attacks.

After the attacks, many observers thought they would play to May’s advantage. But Corbyn managed to flip an area of weakness – security – to a potential strength by hitting out at May for the cuts to police budgets she had authorized as the nation’s home secretary, the top domestic security official.

May, Corbyn charged, had tried to protect Britain “on the cheap” – a point that resonated with his wider message of ending seven years of Tory austerity.