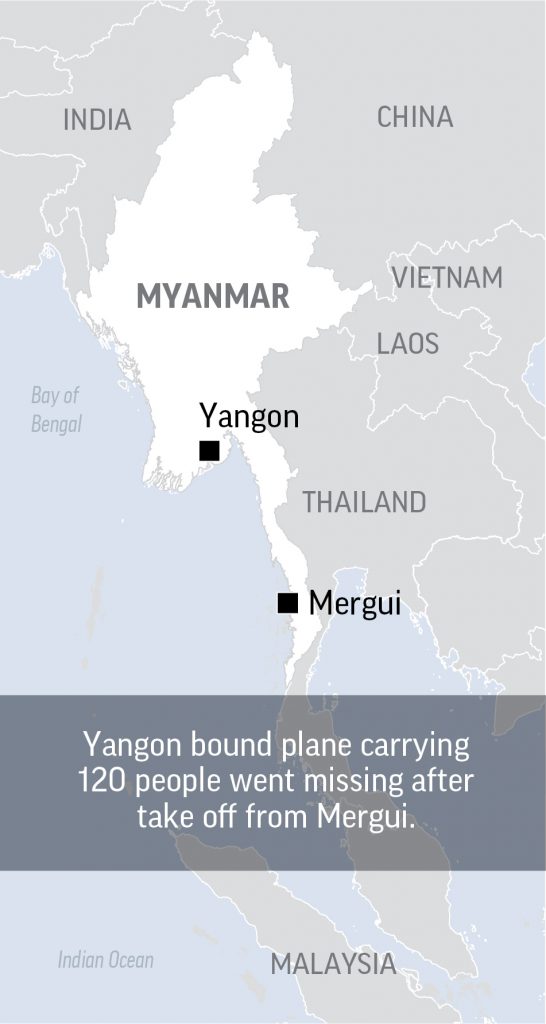 Bodies and aircraft debris were found in the sea off the southern coast of Myanmar on Thursday by ships searching for a military plane that went missing with 122 soldiers, family members and crew on board.

Ten bodies, including six adults and four children, were found about 22 miles off the southern coastal town of Launglon by navy and civilian ships, the military said in its latest statement posted on its official social media page.

The search by nine navy ships, five military planes and two helicopters would continue with help from civilian boats, it said.

The Chinese-made Y-8-200F transport plane vanished on Wednesday after taking off from the coastal town of Myeik on a weekly flight to Myanmar’s largest city, Yangon.

The plane lost contact 29 minutes after takeoff while flying at 18,000 feet over the Andaman Sea, about 43 miles west of the town of Dawei, the military said.

An aircraft wheel, two life jackets and some bags with clothes – believed to be from the missing plane – were found earlier.

Some patches of oil were spotted some 16 nautical miles (18 miles) from Dawei, the military said.

More than 40 ambulances and scores of medics and emergency staff were heading to the fishing town of Sanlan where boats carrying bodies were set to arrive around midday, said Hla Thein, a member of a hospital emergency team.

The plane was carrying 122 passengers, including 108 soldiers and their family members and 14 crew. The military said the 108 passengers included 15 children, 58 adults and 35 soldiers.

It is the rainy season in Myanmar but a civil aviation official said the weather had been “normal” with good visibility when the plane took off.

The aircraft was bought in March 2016 and had a total of 809 flying hours. It was carrying 2.4 tons of supplies, the military said.

Nicknamed the “air camel” in Chinese, the multi-purpose aircraft was approved for production in 1980 and is still being produced by Shaanxi Aircraft Corporation, a unit of state-owned Aviation Industry Corp of China. The four-spoke turboprop is used in countries including China and Sudan.

Aircraft accidents, involving both civilian and military planes, are not uncommon in Myanmar.