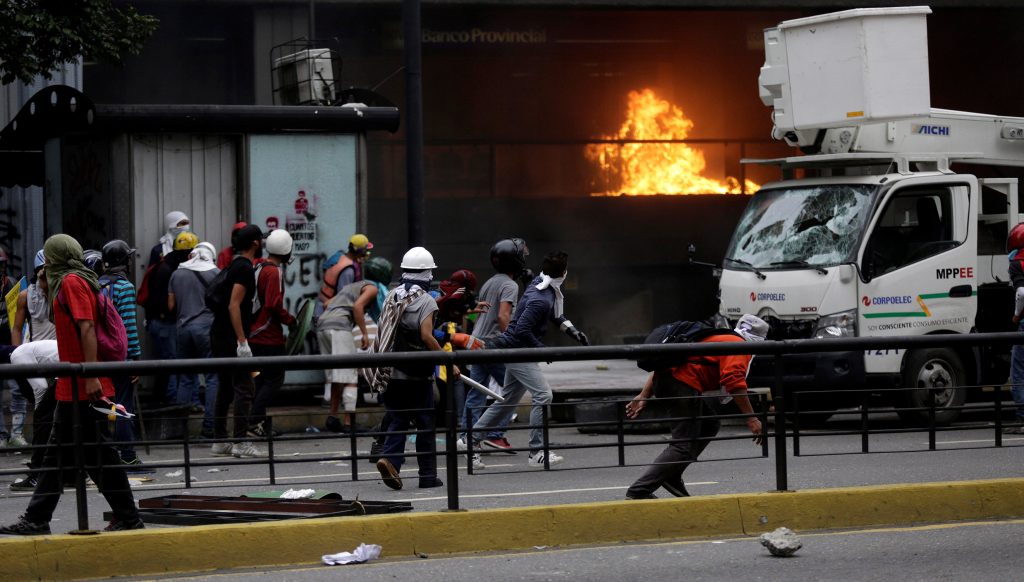 A 17-year-old Venezuelan protester died in ferocious clashes between security forces and protesters in Caracas on Wednesday, taking the death toll from unrest since April to at least 66.

The government said Neomar Lander died when a homemade mortar exploded in his hands while hundreds of youths faced off with National Guard troops in the Venezuelan capital.

Some opposition lawmakers, however, said he was killed by a tear gas cannister fired straight at him. The state prosecutor’s office announced a probe, without giving details.

A Reuters photographer saw a young man, assumed to be Lander, lying bloodied and motionless on the street, receiving emergency first aid.

At least 66 people have died, with victims including government and opposition supporters, bystanders and members of the security forces, since demonstrations began against President Nicolas Maduro more than two months ago.

Each side blames the other for the violence.

Critics denounce Maduro as a repressive dictator, and are demanding general elections, foreign humanitarian aid, freedom for hundreds of jailed activists, and autonomy for the opposition-controlled National Assembly.

“The government has closed all the democratic doors. So what else can we do? Going onto the streets is the only option we have left,” opposition leader Henrique Capriles, who is on the streets daily, told Reuters.

Maduro, 54, calls his foes violent conspirators seeking a coup similar to the short-lived 2002 toppling of his predecessor Hugo Chavez.

“This is criminal terrorism, and we must reject it,” Maduro told supporters in a speech carried on state TV, comparing his foes to Adolf Hitler, Benito Mussolini and Augusto Pinochet.

In the worst turmoil of Maduro’s turbulent four-year rule, thousands of people have been injured and arrested in recent weeks. Protesters are also complaining about hunger and shortages during a brutal economic crisis in the OPEC nation.

Masked youths with homemade shields hurled stones and Molotov cocktails, and set up burning roadblocks, while businesses and schools closed, and residents ran for cover.

Among multiple injuries reported in Caracas and Maracaibo, Venezuela’s second city, the government said two National Guard soldiers were injured by gunshots when they were clearing a barricade in the El Paraiso district of the capital.