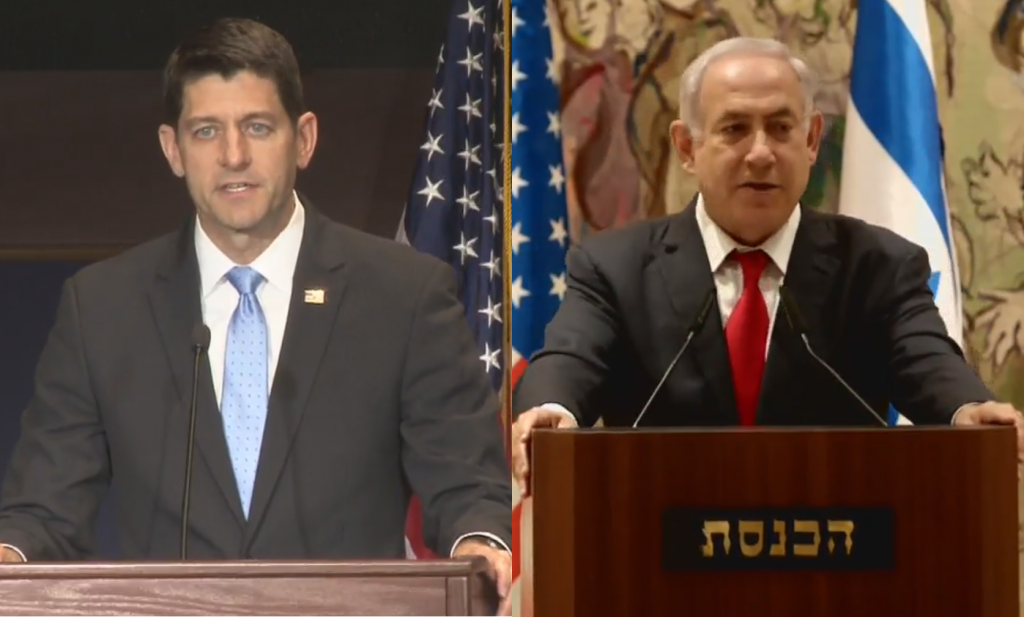 For the first time, the United States and Israel have held a joint celebration by simultaneous broadcast, marking the fiftieth anniversary of the reunification of Yerushalayim on Wednesday.

Participating in the event were members of Congress and the Knesset, incuding Speaker of the House Paul Ryan and Knesset Speaker Yuli Edelstein, U.S. Ambassador to Israel David Friedman, Israeli Ambassador to the U.S. Ron Dermer, and many other political and civic leaders and dignitaries from the Jewish communities on both sides of the ocean.

Addressing the gathering, Prime Minister Binyamin Netanyahu spoke about the unity of Yerushalayim:

“I remember what it was like when [Yerushalayim] was divided.”

“As I grew up in this city, there were places we couldn’t walk, because there were snipers on the walls, and they shot, occasionally, Israelis.”

“It was a wounded, divided city that had no future.”

PM Netanyahu recalled that “the first thing” Israel did upon the reunification of the city in June, 1967, was to “ensure that Yerushalayim was a free city for all. We made sure that the holy sites of Judaism, Christianity, and Islam were available to all, unfettered, untouched.”

“Look around us. Understand what would happen to this less than a square mile if we weren’t here? It would descend into horrible sectarian violence.

“There is one free city where Christians, Jews, and Muslims are free to worship, and that is the free and united city of Yerushalayim, and [that] is how it will stay!”

Netanyahu’s remarks echoed a resolution passed unanimously just a few days ago in the U.S. Senate affirming that “Jerusalem should remain the undivided capital of Israel in which the rights of every ethnic and religious group are protected.”

Edelstein, one of the organizers of the event, said:”This is a touching tribute, which shows the deep friendship and excellent relationship between the U.S. and Israel.”

He urged the U.S. to declare Yerushalayim the “official and unquestioned capital of the State of Israel.”

His counterpart, Speaker Ryan, said that “50 years ago this week, Yerushalayim, the spiritual and religious capital of the Jewish people was made whole again.

“After thousands of years in exile, the Jewish people are finally back home.

The event comes only a few days after President Donald Trump signed a waiver on a congressional resolution to move the U.S. embassy from Tel Aviv to Yerushalayim. Adminstration spokespersons said that while the president still intends to authorize the move, it was decided that now was not the right time.