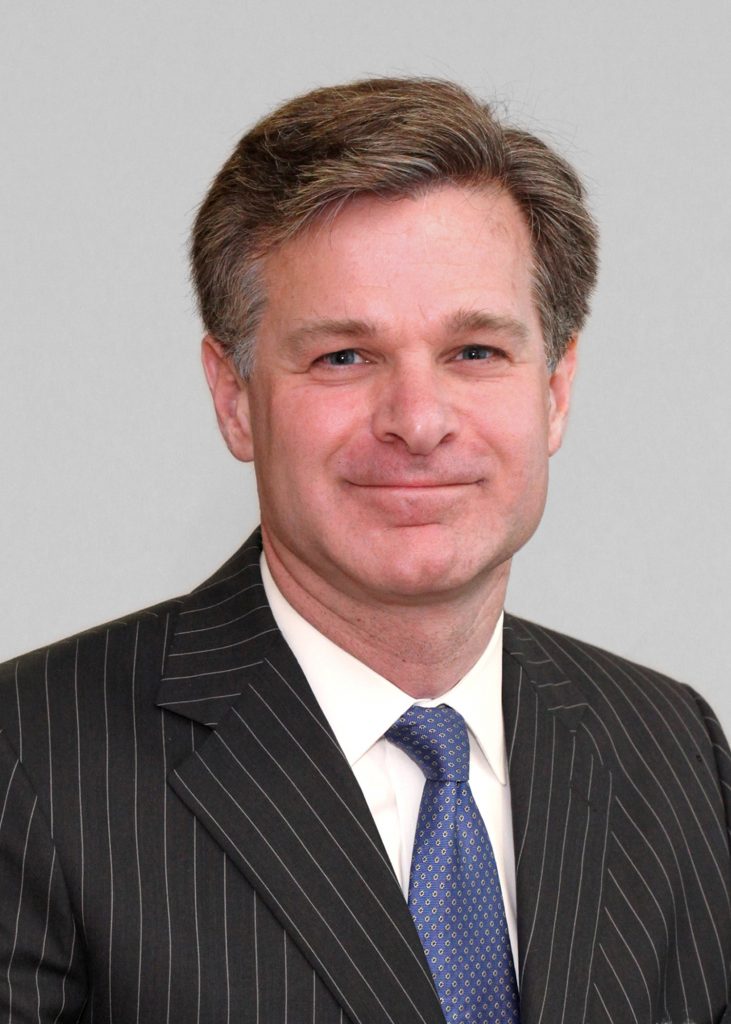 President Donald Trump announced Wednesday that he would nominate Christopher Wray – a white-collar criminal defense attorney who led the Justice Department’s Criminal Division during the George W. Bush administration – to serve as the next FBI director.

Mr. Trump posted the announcement on Twitter, declaring Wray a “man of impeccable credentials.” His appointment would still have to be confirmed by the Senate, which is sure to scrutinize Trump’s nominee intensely.

Wray, now a partner at King & Spalding, led the Justice Department’s Criminal Division from 2003 to 2005, and his firm biography says that he “helped lead the Department’s efforts to address the wave of corporate fraud scandals and restore integrity to U.S. financial markets.” He oversaw the president’s corporate fraud task force and oversaw the Enron Task Force. Before that, he worked in a variety of other Justice Department roles, including as a federal prosecutor in Atlanta.

More recently, he has served as attorney for New Jersey Gov. Chris Christie, a Republican and Trump ally. He also represented the Swiss bank Credit Suisse AG in a tax evasion case that ended in a $2.6 billion settlement with U.S. authorities. In 2014, the bank pleaded guilty to conspiring to aid and assist U.S. taxpayers in filing false income tax returns.

In a statement, Wray called his selection a “great honor” and said, “I look forward to serving the American people with integrity as the leader of what I know firsthand to be an extraordinary group of men and women who have dedicated their careers to protecting this country.”

Trump said Wray would “again serve his country as a fierce guardian of the law and model of integrity once the Senate confirms him to lead the FBI.”

It is unclear how soon that could happen. Sen. Charles Grassley, R-Iowa, who chairs the Judiciary Committee, said the committee would begin consideration of his nomination once receiving it formally – which he indicated might take a couple of weeks.

People who had worked with Wray said he is an accomplished, if low-key, lawyer who would not hesitate to stand up to the president if he believed he had to.

Amy Jeffress, a former federal prosecutor and Yale Law School classmate of Wray, said Wray was a “smart, experienced attorney with a stellar reputation” whose “experience and connections will serve him very well in this position.”

Bill Mateja, who worked with Wray in the Justice Department in the early 2000s and is now in private practice at the Polsinelli law firm, said, “If people thought that Trump might pick a lackey, Chris Wray is not Trump’s lackey.”

But others were not so sure.

Faiz Shakir, American Civil Liberties Union national political director, said in a statement that Wray’s “firm’s legal work for the Trump family, his history of partisan activity, as well as his history of defending Trump’s transition director during a criminal scandal makes us question his ability to lead the FBI with the independence, even-handed judgment, and commitment to the rule of law that the agency deserves.”

Wray represented Christie during the federal investigation into politically motivated lane closures at the George Washington Bridge that connects New Jersey and Manhattan. He kept a low-profile during the scandal, but behind the scenes, he served as a comforting presence to Christie, who on Wednesday called Wray an “extraordinary lawyer” and “a non-political choice.”

“When I was at the absolute lowest point of my professional life, he’s who I called,” Christie told reporters at an event in New Jersey. “I don’t think you can get a better recommendation that.”

Christie would not say whether he recommended Wray to Trump.

Wray’s nomination will bring an end to a search that has seen several contenders take their own names out of the running. Top Justice Department officials initially held talks with eight candidates, and Trump said he could make a “fast decision” on whom to select because “almost all of them are very well-known.”

None of those people ultimately panned out, and Trump soon turned his focus to former senator and Democratic vice presidential nominee Joe Lieberman. But Lieberman, too, withdrew from consideration because another lawyer at his firm was tapped to help Trump with the investigation into whether his campaign coordinated with Russia during the 2016 election.

Wray was one of two candidates Trump interviewed last week. The other was John S. Pistole, an FBI veteran and former Transportation Security Administration director who is now the president of Anderson University in Indiana.

Legislators vowed to scrutinize Wray appropriately – though he did not face immediate condemnation from Democrats that other nominees might have. Rep. John Conyers, D-Mich., said he was “deeply concerned that the next director is being selected according to the criteria of a President, whose campaign and administration are under investigation, and who fired the prior FBI Director on the basis of his zeal in investigating these matters and refusal to swear loyalty to the President” but that he looked forward to learning more about Wray.

Sen. Chris Coons, D-Del., who serves on the Judiciary Committee, said, “I’m encouraged that President Trump has nominated someone with significant federal law enforcement experience, rather than a career in partisan politics, as was rumored over the past several weeks.”

Some of the early focus of scrutiny of Wray was directed at uncovering possible conflicts of interest. Bobby Burchfield, another lawyer at Wray’s firm, was hired earlier this year by Trump’s company as an ethics adviser – though there was no indication Wray himself did work for Trump or his businesses.

If confirmed, Wray will succeed James Comey, whom Trump abruptly fired last month amid the Russia investigation. That probe is now being overseen by a special counsel, former FBI director Robert Mueller. Andrew McCabe, who had been deputy director, is leading the FBI on an interim basis.

Mateja, who served as senior counsel to Comey when he was the deputy attorney general, said Wray and Comey are “very much the same,” though Wray is more introverted.

“I know both of them very well, and I will tell you first, I think the American people should feel good about the fact that President Trump did not pick a wallflower. He picked somebody with a real moral compass that’s very similar to Jim Comey’s moral compass,” Mateja said.

Neil MacBride, a former U.S. attorney who worked with Wray both inside and outside of government, said Wray’s selection was reminiscent of Mueller’s in 2001.

“Like Bob, Chris has great law enforcement chops; both were former heads of the Criminal Division, former [principal associate deputy attorneys general], and former line prosecutors who handled the department’s most serious terrorism and criminal cases. Both are men of integrity and independence, who are serious, thoughtful, even-tempered, with great judgment,” MacBride said.

Trump’s announcement on Wray – which took even the chair and ranking member of the Senate Judiciary Committee by surprise – comes the day before Comey is scheduled to testify before the Senate Intelligence Committee in what will likely be one of the most closely watched congressional hearings of recent years. Comey has alleged in memos that, before Trump fired him, the president requested that his FBI director pledge loyalty and urged him to back off from his investigation into former national security adviser Michael Flynn, people familiar with the memos have said.

The firing itself was an unusual move. FBI directors are generally appointed to 10-year terms so they can avoid political interference.

Although Wray might not be the ultimate supervisor on the Russia probe, he could play a role in it, as FBI agents are still working on the case with Mueller.

Wray is no stranger to high-profile cases. His name appears on several redacted records in the American Civil Liberties Union’s database of torture documents. According to a 2005 profile in the Atlanta Journal-Constitution, he had to assess on his first day at the Justice Department how the FBI misplaced files in the trial of Oklahoma City bomber Timothy McVeigh. He was also involved in the response to the Sept. 11, 2001 terrorist attacks and helped coordinate the investigation into the D.C.-area snipers, according to the Atlanta Journal-Constitution, though in an interview with the newspaper, he noted that his work was not all terrorism-related.

“I think a lot of people thought all the focus would be on terrorism and everything else would go into the ditch,” Wray said. “In fact, I think we’ve accomplished incredible things. I feel so fortunate to have had this job in this time.”

Joe Robuck, a retired FBI special agent who worked with Wray when Wray was a federal prosecutor in Atlanta and has remained in contact with him through the years, said he first saw the news that his friend had been interviewed last week and sent him an email saying, “Chris, you got to go for it. The country needs you.”

Robuck said Wray later called to ask what current FBI agents might think of him taking the post, having not worked himself in the bureau previously. FBI Agents Association President Thomas O’Connor said in a statement that the group, which had previously backed former Rep. Mike Rogers, R-Mich., looks forward to meeting with him.

Robuck said Wray did not bring up the president, but he did mention an interview with Attorney General Jeff Sessions.

Sessions, Robuck said, had asked Wray about his experience as an assistant U.S. attorney, and Wray told him about a case he and Robuck had worked together on years ago in which an Atlanta investment officer illegally steered millions of dollars to a particular banker in exchange for payoffs. Robuck said he had talked to jurors after the trial in that case, and they told him they had a nickname for Wray: “the bulldog.”

“He’s completely mission-oriented,” Robuck said. “It’s a tough job, it’s a really hard job, but he will deal with the pressure, and he won’t let anybody influence him.”

“The President asked us to look for an FBI Director who has integrity, who understands and is committed to the rule of law, and who is dedicated to protecting the American people from crime, gangs, and terrorists,” he said in a statement. “We have found our man in Chris Wray.”