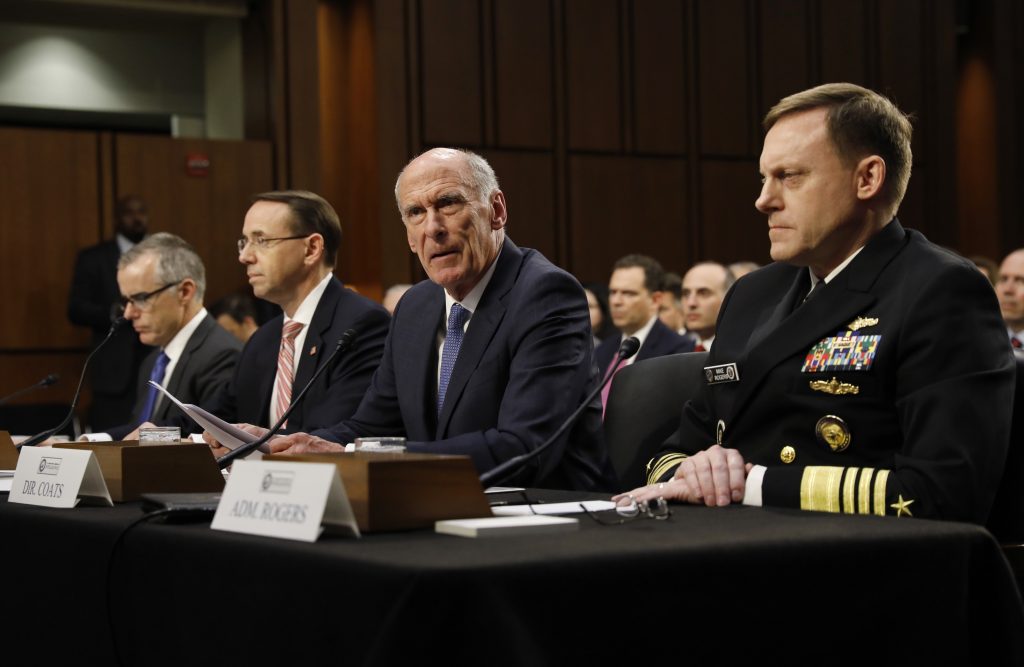 U.S. Senators angrily confronted top intelligence officials at a congressional hearing on Wednesday when they refused to discuss whether President Donald Trump had pressured them to intervene in an FBI probe into Russia and the 2016 U.S. election.

Both National Security Agency Director Admiral Mike Rogers and Dan Coats, the Director of National Intelligence, told the Senate Intelligence Committee they believed their conversations with the president were confidential.

Angus King, an independent who caucuses with Democrats, was one of several exasperated senators who pressed the officials.

“Why are you not answering the questions?” King asked. “What’s the legal basis for your refusal for you to testify to this committee.”

The officials provided no legal basis. “You are inappropriately refusing to answer these questions today,” King told Rogers.

Allegations that Russia meddled with the U.S. election to help Mr. Trump win have hung over the Republican since he took office in January and threaten to overwhelm his policy priorities. The Federal Bureau of Investigation and several congressional committees are conducting investigations of the alleged Russian interference.

The refusal by intelligence chiefs to discuss possible conversations with Trump will put even more of a spotlight on former FBI director James Comey when he appears before the same panel on Thursday to give his own much-awaited testimony.

The NSA head had said earlier he would not address any specific discussions he might have had with Trump.

“I’m not going to talk about theoreticals and I’m not going to discuss the specifics of any interaction or conversations … that I may or may not have had with the president of the United States,” Rogers said.

When asked about the allegations that Trump tried to influence the FBI probe, Coats, a Trump appointee, said:

“We are in a public session here, and I do not feel that it is appropriate for me to address confidential information.”

The Washington Post reported on May 22 that Trump had asked the intelligence officials to help push back against the FBI investigation into possible coordination between his campaign and Moscow.

The newspaper reported on Tuesday that Coats told associates in March that the president asked him if he could intervene with Comey to get the bureau to back off its focus on Michael Flynn, the former national security adviser.

The Kremlin denies U.S. intelligence agencies’ conclusion that Moscow tried to tilt the election campaign in Trump’s favor, using means such as hacking into the emails of senior Democrats. Trump has denied any collusion.

Deputy Attorney General Rod Rosenstein, the second-ranking official at the Department of Justice who signed a letter recommending Comey’s dismissal, also testified on Wednesday, as did acting FBI Director Andrew McCabe, who took over after Comey was fired.