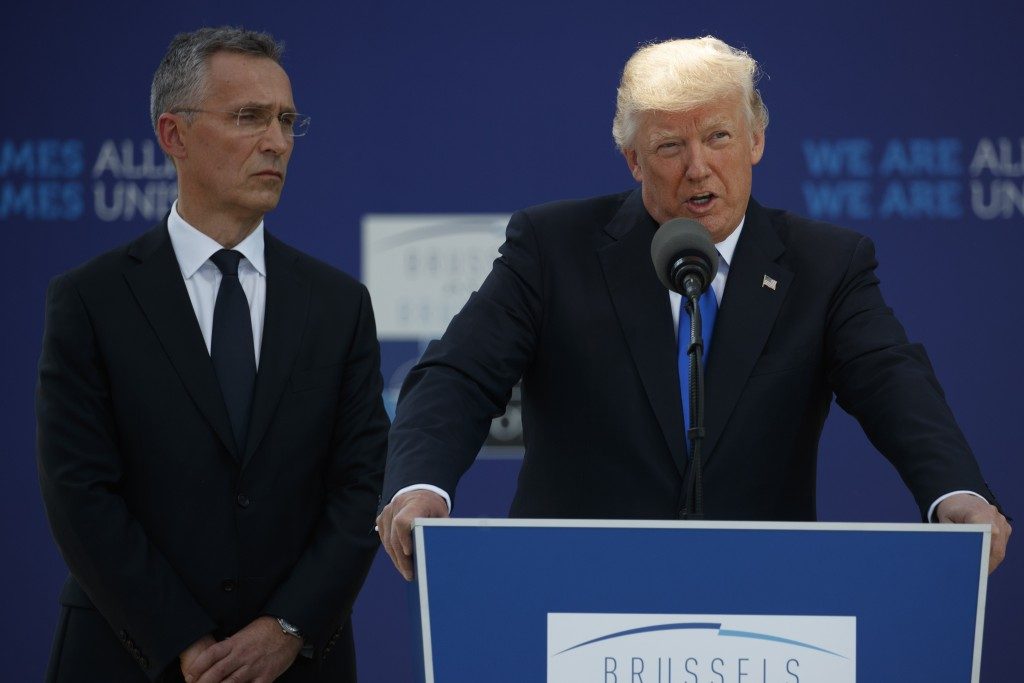 So what if, in his speech last week to NATO, Donald Trump didn’t explicitly reaffirm the provision that an attack on one is an attack on all?

What’s the big deal? Didn’t he affirm a general commitment to NATO during his visit? Hadn’t he earlier sent his vice president and secretaries of state and defense to pledge allegiance to Article 5?

And anyway, who believes that the United States would really go to war with Russia — and risk nuclear annihilation — over Estonia?

Ah, but that’s precisely the point. It is because deterrence is so delicate, so problematic, so literally unbelievable that it is not to be trifled with. And why for an American president to gratuitously undermine what little credibility deterrence already has, by ostentatiously refusing to recommit to Article 5, is so shocking.

Deterrence is inherently a barely believable bluff. Even at the height of the Cold War, when highly resolute presidents, such as Eisenhower and Kennedy, threatened Russia with “massive retaliation” (i.e., all-out nuclear war), would we really have sacrificed New York for Berlin?

No one knew for sure. Not Eisenhower, not Kennedy, not the Soviets, not anyone. Yet that very uncertainty was enough to stay the hand of any aggressor and keep the peace of the world for 70 years.

Deterrence does not depend on 100 percent certainty that the other guy will go to war if you cross a red line. Given the stakes, merely a chance of that happening can be enough. For 70 years, it was enough.

Leaders therefore do everything they can to bolster it. Install tripwires, for example. During the Cold War, we stationed troops in Germany to face the massive tank armies of Soviet Russia. Today we have 28,000 troops in South Korea, 12,000 near the demilitarized zone.

Why? Not to repel invasion. They couldn’t. They’re not strong enough. To put it very coldly, they’re there to die. They’re a deliberate message to the enemy that if you invade our ally, you will have to kill a lot of Americans first. Which will galvanize us into full-scale war against you.

Tripwires are risky, dangerous and cynical. Yet we resort to them because parchment promises are problematic and tripwires imply automaticity. We do what we can to strengthen deterrence.

Rhetorically as well. Which is why presidents from Truman on have regularly and powerfully reaffirmed our deterrent pledge to NATO. Until Pres. Trump.

His omission was all the more damaging because of his personal history. This is a man chronically disdainful of NATO. He campaigned on its obsolescence. His inaugural address denounced American allies as cunning parasites living off American wealth and generosity. One of Trump’s top outside advisers, Newt Gingrich, says that “Estonia is in the suburbs of St. Petersburg,” as if Russian designs on the Baltic states are not at all unreasonable.

Moreover, Trump devoted much of that very same speech, the highlight of his first presidential trip to NATO, to berating the allies for not paying their fair share. Nothing particularly wrong with that, or new — half a century ago Senate Majority Leader Mike Mansfield was so offended by NATO free riding that he called for major reductions of U.S. troops in Europe.

That’s an American perennial. But if you’re going to berate, at least reassure as well. Especially given rising Russian threats and aggression. Especially given that Trump’s speech was teed up precisely for such reassurance. An administration official had spread the word that he would use the speech to endorse Article 5. And it was delivered at a ceremony honoring the first and only invocation of Article 5 — ironically enough, by the allies in support of America after 9/11.

And yet Trump deliberately, defiantly refused to simply say it: America will always honor its commitment under Article 5.

It’s not that, had Trump said the magic words, everyone would have 100 percent confidence we would strike back if Russia were to infiltrate little green men into Estonia, as it did in Crimea. But Trump’s refusal to utter those words does lower whatever probability Vladimir Putin might attach to America responding with any seriousness to Russian aggression against a NATO ally.

Angela Merkel said Sunday (without mentioning his name) that after Trump’s visit it is clear that Europe can no longer rely on others. It’s not that yesterday Europe could fully rely — and today it cannot rely at all. It’s simply that the American deterrent has been weakened. And deterrence weakened is an invitation to instability, miscalculation, provocation and worse.