Retailers Lead Stocks to a Second Day of Modest Losses

Retailers led a modest slide in U.S. stocks Tuesday as the market eased back for the second day in a row, pulling it further below record highs set late last week.

Macy’s sank more than 8 percent after warning that its profit margins could be weaker than the company had forecast earlier. Several other retailers, including Conn’s and Casey’s General Stores, also slumped after issuing disappointing quarterly results or outlooks.

Banks and other financial companies also posted losses as the yield on the 10-year Treasury slipped to 2.14 percent, the lowest level since November. Lower bond yields mean lower interest rates on loans, which hurt banks’ profits.

“This is a market that’s taking a breather and is prepared to move, the question is in which direction?” said Quincy Krosby, a market strategist at Prudential Financial. “Perhaps the move is going to be, in the short term, a pullback and perhaps that’s another reason we have money going into the Treasury markets as a hedge.”

Despite the two-day market slide, the major indexes remain near their most recent record highs set Friday. 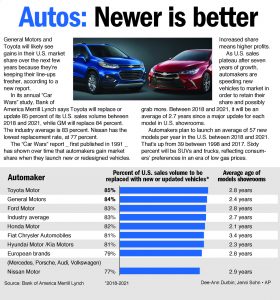 For the second day in a row, trading got off to a subdued start Tuesday as investors sized up the latest batch of company earnings and economic news.

The Labor Department provided some encouragement early on, reporting that job openings rose 4.5 percent in April to more than 6 million, the most since December 2000, when the government began tracking the data. Still, hiring fell 4.8 percent.

In a presentation to investors, Macy’s Chief Financial Officer Karen Hoguet said the company’s gross margins could fall more than Macy’s expected a couple of months ago, with the first half of the year especially weak. The company continues to grapple with too much inventory and a lot of discounts on beauty products.

Conn’s sank 9.1 percent after the furniture and mattress retailer issued a disappointing second-quarter outlook for sales at its established stores. The stock declined $1.73 to $17.15.

Not all retailers had a bad day.

A weak report on retail sales in the 19-country eurozone weighed on European stock indexes. Germany’s DAX was down 1 percent, while France’s CAC 40 was 0.7 percent lower. Britain’s FTSE 100 was flat ahead of the U.K. election on Thursday. In Asia, Japan’s benchmark Nikkei 225 dipped nearly 1.0 percent, while Hong Kong’s Hang Seng edged up 0.5 percent. South Korean markets were closed for a holiday.