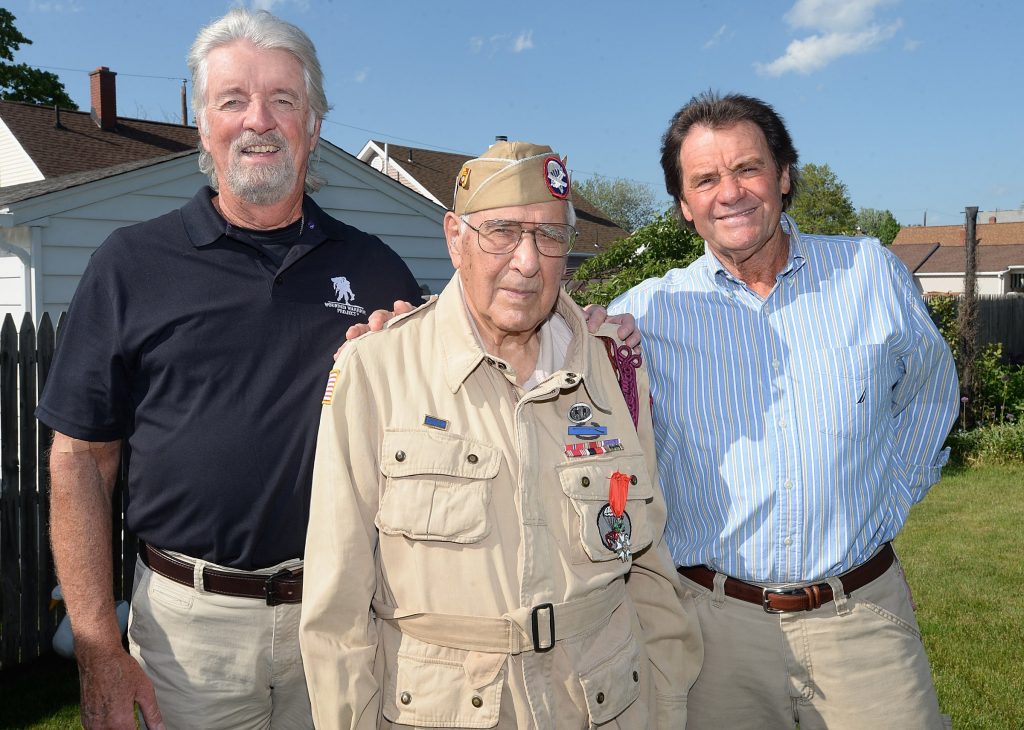 German anti-aircraft tracer fire filled the nighttime sky, and Morettini’s first thoughts were that his life was about to end before he reached the ground.

“When my parachute opened up, I thought I would be dead,” said Morettini, a 92-year-old veteran who lives in the 1400 block of West 32nd Street in Erie. “I never saw so many tracers.”

Morettini landed about 16 miles inland from the Normandy coast, behind German lines.

“When I landed, I landed between two trees, about 6 inches off the ground, and I was swinging back and forth like a swing, and then I jumped up and I sat on the ground.”

Morettini survived D-Day, but suffered a gunshot wound to his right arm on July 4, 1944, when his company fought and took what he recalls as Hill 195 during the Normandy campaign. He participated in four major European battle campaigns, including the Battle of the Bulge. He was awarded the Purple Heart Medal and numerous other medals for his distinguished military service.

Morettini was recently honored during ceremonies commemorating the 100th anniversary of the U.S. 82nd Airborne at Fort Bragg, North Carolina.

Erie residents John Malone, 71, and Bill Dunbar, 71, accompanied Morettini and his son, Anthony Morettini, of Columbus, Ohio, to Fort Bragg for the two days of commemorations.

“It’s an outstanding honor for me to be able to know Joseph for everything he did and, of course, all the guys from the Greatest Generation and what they have done,” said Dunbar, whose grandson, Riley Dunbar, 21, is currently a paratrooper with the 82nd Airborne. “We owe these guys so much, and I’m thrilled Morettini will be able to enjoy himself and reconnect with the few people who are left of his generation.”

Malone, a former UPMC Hamot chief executive, and Dunbar met and became friends with Morettini after Riley Dunbar and Morettini met for lunch in 2015 in Millcreek Township to share stories about training and jumping.

“Since that time, Bill and I have spent time with Mr. Morettini. We take him to lunch, we take him to breakfast, we spend time with him,” Malone said. “I saw they were having the anniversary of the 82nd Airborne, so I thought it would kind of be interesting to take him down for the 100th anniversary.”

“The commanding general is anxious to meet Joe because there aren’t that many contemporaries left from what he did in World War II,” Malone said.

“I am really excited for this,” Morettini said. “I enjoy going there. I’ve been to Fort Bragg a few times, and they treat me real well. I’ve waited for this all year when they told me about it. When I went to Fort Bragg the last time in 2014 for the 70th anniversary of D-Day, the general had us up for dinner and the colonel invited us for dinner.”

Morettini was born in Lima, Pennsylvania, in 1924. His mother brought him to Erie four months later. He attended Academy High School, but said he quit school when he was 16.

“The first thing is I wanted to get into the Airborne,” Morettini said. “I don’t know why, but I did get an extra $50 per month in the Airborne.”

After completing his basic training in Illinois, Morettini was shipped to Fort Benning, Georgia, where he completed four weeks of parachute jump school.

“At Fort Benning, the sergeant said to all of us new guys, ‘You don’t have to do anything I tell you to do. But if you don’t do it, I’ll take your name. If I take your name three times, you’re disqualified,” Morettini said.

When he was shipped to Europe in January 1944, Morettini was assigned to E Company of the 508th Parachute Infantry Regiment.

“We had training, we took night jumps,” he said. “They put bricks in your bag assimilating land mines so you would get used to the weight jumping with those,” Morettini said. “Those jumps at night were scary because you couldn’t see the ground. I turned my bricks in, and a lot of guys didn’t have their bricks. They got bawled out because they were supposed to bring them back.”

Malone said the Fort Bragg ceremonies are all about Morettini and spending time with and honoring “a true American hero, an Erie resident and just an incredible, incredible gentleman.”

“When he tells his stories about what he and his fellow paratroopers went through in World War II, it’s amazing,” Malone said. “It will be a great chance to take him down there and be a part of that and honor him for being a true American hero.”