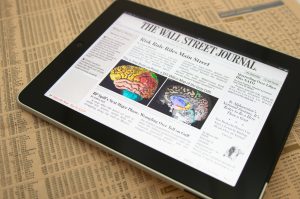 After blocking Google users from reading free articles in February, The Wall Street Journal’s subscription business soared, with a fourfold increase in the rate of visitors converting into paying customers. But there was a trade-off: Traffic from Google plummeted 44 percent.

The reason: Google search results are based on an algorithm that scans the internet for free content. After the Journal’s free articles went behind a paywall, Google’s bot only saw the first few paragraphs and started ranking them lower, limiting the Journal’s viewership.

Executives at the Journal, owned by Rupert Murdoch’s News Corp., argue that Google’s policy is unfairly punishing them for trying to attract more digital subscribers. They want Google to treat their articles equally in search rankings, despite being behind a paywall.

“Any site like ours automatically doesn’t get the visibility in search that a free site would,” Suzi Watford, the Journal’s chief marketing officer, said in an interview. “You are definitely being discriminated against as a paid news site.”

The Journal’s experience could have implications across the news industry, where publishers are relying more on convincing readers to pay for their articles because tech giants are vacuuming up the lion’s share of online advertising.

With Google, publishers try to strike a balance. While they may want to sign up more subscribers by not giving away free articles, they also don’t want their content to drop in search results, which drives traffic to their sites and can boost advertising sales. For that reason, many outlets with subscription businesses — like The New York Times and Financial Times — let Google users read at least one free article so they still rank high in search results.

Google says its “first click free” policy is good for both consumers and publishers. People want to get the news quickly and don’t want to immediately encounter a paywall. Plus, if publishers let Google users sample articles for free, there’s a better chance they’ll end up subscribing, Google says. The tech giant likens its policy to stores allowing people to flip through newspapers and magazines before choosing which one to buy.

“For the many publishers who already take advantage of this approach, it provides the ability to protect their business model and the opportunity to convert people who sample their content into paying customers,” Google said in a statement.

The Journal decided to stop letting people read articles free from Google after discovering nearly 1 million people each month were abusing the three-article limit. They would copy and paste Journal headlines into Google and read the articles for free, then clear their cookies to reset the meter and read more, Watford said.

The Journal now only lets Google users see a short snippet at the top of its articles, restricting the rest to its 2.2 million subscribers or people who arrive via social media. In the most recent quarter, the Journal’s digital subscribers grew about 30 percent compared with the prior year, driven partly by barring Google users from reading for free.

Google, meanwhile, displays a “subscription” label next to Journal articles in Google News search results, alerting users that they won’t be getting a full article.

The Journal’s ad revenue wasn’t affected by its recent drop in Google traffic because social media visits grew 34 percent in that time, keeping overall web traffic flat, Watford said. The Journal lets readers get some articles for free via social media, which the paper views as a marketing tool.

The Journal’s parent company, News Corp., has a tense history with Google. In 2009, Murdoch accused Google of stealing articles and threatened to pull his company’s stories from its search results.

The Journal isn’t the only publisher skeptical of Google’s policy. Jessica Lessin, founder of The Information, a technology publication, said sampling options like Google’s “first click free” program “have not proven to be as beneficial as many publishers thought.”

Her publication, which charges $399 a year for an online subscription, doesn’t let Google users read any articles for free because it’s focused on a Silicon Valley audience that’s more likely to find its journalism through social media than from a Google search, she said.

Google and publishers often have different objectives, said Lessin, a former Wall Street Journal reporter. Google wants to capture attention so it can sell advertising. Many publishers want to convince readers to pay.