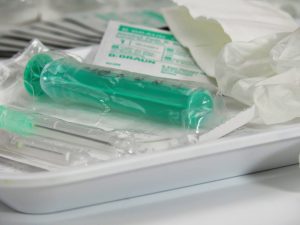 Five cases of measles does not an “epidemic” make, said Professor Itamar Grotto, a top official in the Health Ministry. The fact that five Yerushalayim women between the ages of 20 and 40 were diagnosed with measles in recent days does not mean that there was a major outbreak of the disease here. “There has been an increase in measles cases in many places, and the rate of infection in Israel is different than in Europe,” where there have been several outbreaks of the disease. “There is no need to panic.”

Panicking, apparently, is what many Israeli women have been doing in recent days, as HMO (kupot cholim) offices reported that they have been inundated with requests for measles inoculations. While measles are generally contagious, the context of the contagion had to be taken into perspective, Grotto told Channel Two Monday. “There have been five reported cases so far, all in Yerushalayim. Two women contracted measles and went to a hospital for treatment, and at least one of the cases involved a woman in the hospital who was infected by them.” The number and extent of the infections in no way justified panic, he added.

According to the Health Ministry, any Israeli born or who immigrated to the country before 1957 could consider him or herself immune to measles, as they had likely either contracted the disease or built up a resistance to it, since measles were very common in Israel during the early and mid-1950s. Children born in Israel between 1957 and 1978 received at least one inoculation at school, and while children are usually given booster shots later on, even the one shot was probably sufficient to keep measles away during adulthood, Grotto said.

Today inoculations are generally given by family doctors, and most children in Israel receive measles shots, said Grotto. Those who have yet to inoculate themselves or their children have nothing to worry about, either; the Health Ministry currently has tens of thousands of units for inoculations. “Part of the panic was apparently a rumor that we were running out of the vaccine, but there is plenty to go around,” he added.