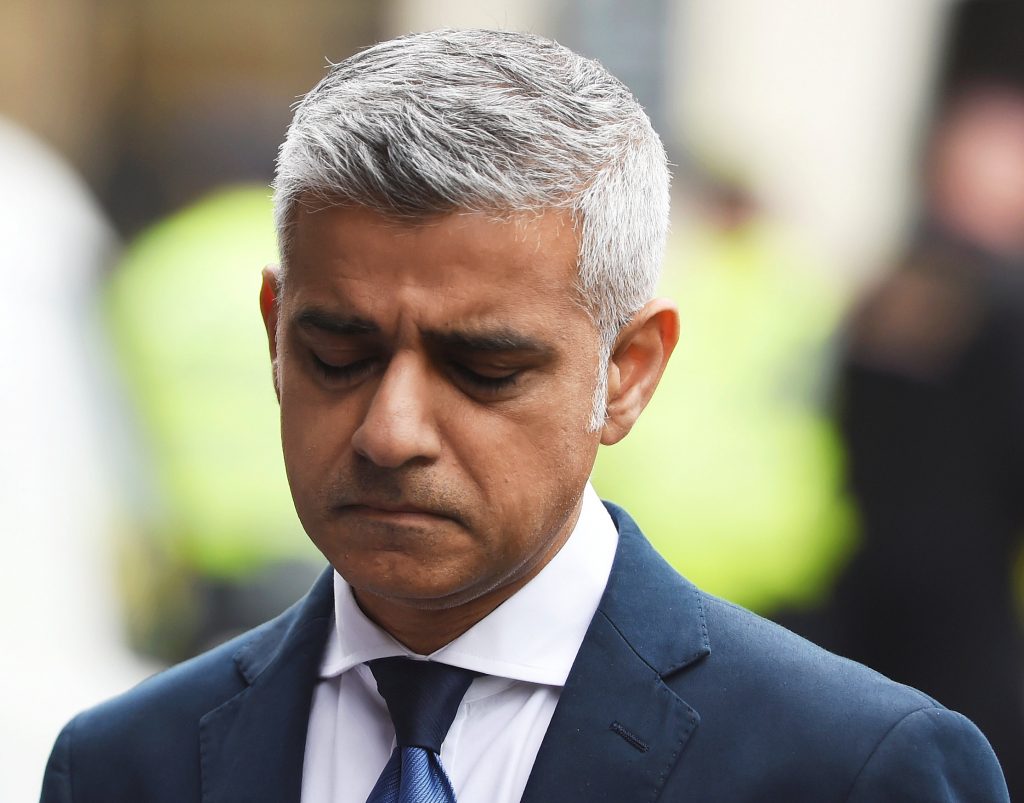 U.S. President Donald Trump accused London Mayor Sadiq Khan on Monday of making a “pathetic excuse” over a statement urging Londoners not to be alarmed by the presence of additional police on the streets after Saturday’s deadly attack.

Three jihadis drove a van into pedestrians on London Bridge late on Saturday before running into the bustling Borough Market area where they stabbed people indiscriminately. All three attackers were shot dead by police.

Mr. Khan had said on Sunday morning that people would see an increased police presence on the streets of the capital and should not be alarmed by that.

Mr. Trump first took issue with Khan’s comment on Sunday, suggesting in a tweet that the mayor was downplaying the attacks. He went much further in Monday’s tweet.

“Pathetic excuse by London Mayor Sadiq Khan who had to think fast on his ‘no reason to be alarmed’ statement. MSM is working hard to sell it!” Trump wrote. MSM referred to mainstream media.

Khan, who belongs to the opposition Labour Party and is the first Muslim to be elected mayor of a major western European city, is popular in London and his response to Saturday’s killings has been widely praised as dignified.

Prime Minister Theresa May, the Conservative Party leader, was asked earlier on Monday about Trump’s criticism of Khan.

“I think Sadiq Khan is doing a good job and it is wrong to say anything else,” she said.

Khan’s lengthy statement on Sunday morning, heard in full by Reuters, strongly condemned the attack and gave a number of details about what had happened and what measures were being taken in response.

“Londoners will see an increased police presence today and over the course of the next few days. No reason to be alarmed. One of the things the police, all of us need to do is make sure we’re as safe as we possibly can be,” Khan said.

In his Sunday tweet, Trump commented: “At least seven dead and 48 wounded in terror attack and Mayor of London says there is ‘no reason to be alarmed!'”

It was met with a barrage of criticism in both Britain and the United States, with former Vice President Al Gore among many public figures who accused Trump of misrepresenting what Khan had said.

A YouGov poll of 1,000 Londoners published on Monday found that Khan was more trusted than both May and national Labour leader Jeremy Corbyn to make the right decisions about keeping Britain safe from terrorism.

There was no immediate response from Khan to Trump’s latest tweet.

On Sunday, a spokesman for the London mayor said he was working with the police, emergency services and government to coordinate the response to the attack, and had “more important things to do” than to respond to Trump.

The two men have history. During the U.S. presidential election campaign, Khan was among many people who spoke out against Trump’s proposed ban on Muslims entering the United States, an idea he said would play into the hands of terrorists.

In March, after an attack by an Islamic terrorist that left five people dead in Westminster, central London, Trump’s son Donald Trump Jr. issued a tweet that criticized Khan.

Trump Jr. wrote “You have got to be kidding me?!” above a link to an article reporting comments Khan had made months earlier.

In the article, Khan was reported as saying that being prepared for terror attacks was “part and parcel” of living in a major city. He also urged Londoners to be vigilant.

Khan dismissed Trump Jr.’s comments at the time, saying he had been doing more important things in the wake of the Westminster attack than responding to tweets.