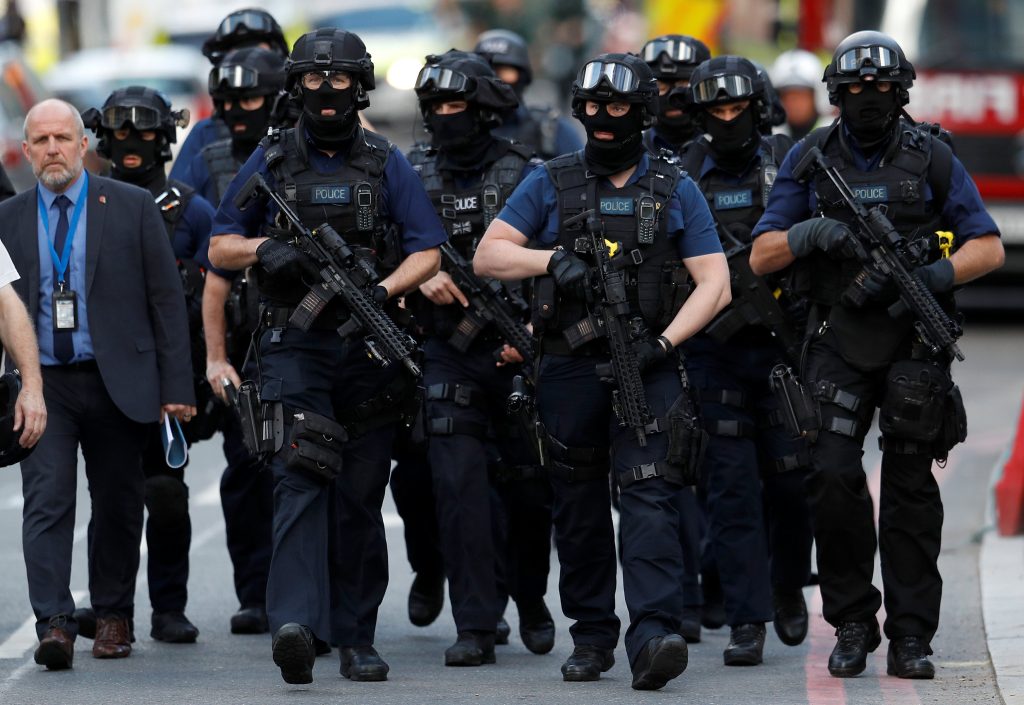 When police arrived at London bridge Saturday night, they didn’t have much time.

Knife-wielding terrorists had rammed a truck into a busy pedestrian sidewalk. They were attacking onlookers, seemingly at random. At least seven people were killed and scores more injured.

So officers did the best they could — they identified the suspects (wearing fake suicide vests), then shot them. Sources say they fired more than 50 rounds at the three attackers, an “unprecedented” number, police said.

And their goal wasn’t simply to incapacitate. Their aim was to kill.

The decision to “shoot to kill” has been praised by British leaders, including Prime Minister Theresa May. In a Monday speech, May said the tactic enabled police to stop the assault just eight minutes after the first emergency calls were received. “Shoot to kill,” she said, likely “saved countless lives.”

“I absolutely support ‘shoot to kill,’ and I think what we saw on our streets on Saturday was how important that was,” she said, to applause from the audience.

Jeremy Corbyn, May’s main opponent in Thursday’s election, has been critical of “shoot to kill” in the past, saying in 2015 that the policy would lead to “war in the streets . . . not a good thing.” On Sunday, though, he reversed course, saying that he supports the use of “whatever proportionate and strictly necessary force” was needed to save lives.

It’s worth noting, however, that “shoot to kill” is not official police policy, at least not in most circumstances. Discharging a weapon is legal only if officers can show they were acting to protect themselves or others and if they can prove that their actions were proportionate to the threat. Official policy says officers should shoot only to incapacitate, though they’re trained to target the chest of a suspect who needs to be neutralized quickly.

Police leaders have endorsed this philosophy even in the case of an active-shooter situation. In 2013, police shot and injured Michael Adebolajo and Michael Adebowale after they stabbed a soldier to death on a London street. The attackers survived, and police administered CPR until EMT’s arrived.

After the 2015 terrorist attacks in Paris, Metropolitan police commissioner Bernard Hogan-Howe emphasized that there was no “shoot to kill” policy but said officers can use their discretion in emergencies. “The law says that the police can use reasonable force, firstly to stop a crime, and secondly, to arrest someone who is putting someone else in danger,” he told a local radio station. “If someone’s life is at risk, a police officer can intervene. If they are armed or otherwise so dangerous, we can stop them.”

At the time, The Guardian offered more insight into the department’s thinking:

“A senior police source said the unit would aim to arrest the attackers, but would be prepared to contain and ‘neutralize’ them. ‘We’re police officers, not soldiers. We’re not at war. Our job is to arrest people,’ the source said.

“Even if faced with a gunman or gunmen on the rampage, the unit would not have orders to shoot to kill, but would be told to use minimum force. They would not be ‘firing the maximum number of bullets’ and their actions would be subject to the criminal law.”

And if this weekend’s attacks highlight why police sometimes need to “shoot to kill,” they also highlight the risks of such a measure.

A bystander was shot in the head by police on Saturday night. According to NBC, he is an American and is expected to survive. A witness told reporters that he saw a man standing near the window of a pub get shot in the head. The victim was with two friends.

“He was bleeding through his eye,” Fabio Lamas told NBC. “I went to get the first-aid kit and I started speaking to his friends and to try and calm them down.”