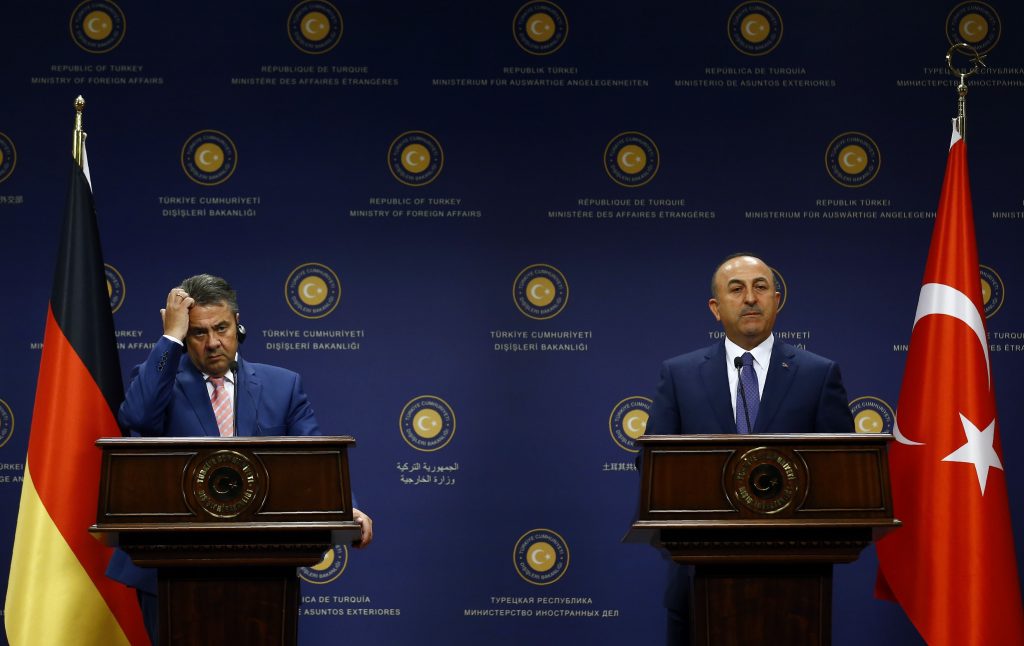 Turkey on Monday refused to budge on its refusal to let German lawmakers visit troops stationed at a Turkish air base, a stance that left NATO ally Germany on the verge of a likely decision to move those troops to Jordan.

Speaking after a meeting with his German counterpart that was widely viewed as the last chance to resolve an impasse over the visits, Turkish Foreign Minister Mevlut Cavusoglu called for “positive steps” on Turkey’s requests for Germany to crack down on Kurdish rebels and alleged coup plotters.

Cavusoglu said Turkey would allow German legislators to visit a NATO base in the central province of Konya, but not Incirlik Air Base, where about 270 German troops are stationed with Tornado reconnaissance jets and a refueling plane.

The German troops at Incirlik are part of the international coalition against the Islamic State group. German deployments abroad require parliamentary approval, and German leaders say it’s essential that lawmakers be able to visit troops as they want.

Germany’s defense minister said her country’s Cabinet will decide Wednesday “where we relocate (the troops) and whether we relocate.” She said that “we are well prepared for a relocation.”

“At the moment, a visit to Konya is possible but not to Incirlik,” Cavusoglu said at a news conference with German counterpart Sigmar Gabriel. “In the future, if the conditions are there and there is normalization, (a visit to) Incirlik may be possible.”

“If Germany takes positive steps, we will always take two (positive) steps. But we cannot ignore the current situation,” he said.

Turkey blocked the latest Incirlik visit request in anger over German authorities’ decision to grant asylum to soldiers and other individuals that Turkey accuses of participating in last year’s failed coup. Turkey also accuses Germany of harboring Kurdish militant groups, which it considers to be terrorists.

Relocating the troops from Incirlik appears politically inevitable after Monday’s rebuff, though the timing isn’t yet clear.

There is no appetite in Germany, which faces elections in September, for making concessions to the Turkish government. German officials have said that completing the transfer of the Tornados could take up to two months, though the refueling plane could be moved in two weeks.

German Defense Minister Ursula von der Leyen recently visited a possible alternative base at Azraq in Jordan. She said Monday that the relocation would entail moving at least 200 containers and 10,000 tons of material.

Flights by German planes would have to be interrupted, “but we will do everything in our power to keep this interruption as short as possible,” she told reporters in Germany.

In Ankara, Gabriel stressed that visits by parliamentarians are a requirement of the German constitution and parliamentary system, and it will not be possible for Berlin to retain troops in Incirlik under the circumstances.

Gabriel added that Berlin welcomed Turkey’s decision to allow visits to Konya and that Germany did not want to escalate the tensions.

“Turkey and Germany are going through a troubled period,” Gabriel said.

Ties have also been soured by the jailing in Turkey of two German journalists and by German local authorities banning planned campaign rallies by Turkish ministers earlier this year.

Cavusoglu reiterated Turkey’s position that Die Welt journalist Deniz Yucel, who holds Turkish and German citizenship, was not detained for any journalistic activity, insisting that he was being prosecuted for allegedly aiding terror groups.

He also claimed that foreign intelligence agencies are using journalists for their activities.

“They have started a trend in Europe, the intelligence agencies are using journalists. Why? So that if they are caught, they can start a campaign and press for their release by claiming ‘a journalist has been arrested, journalists are being jailed,’” Cavusoglu said.