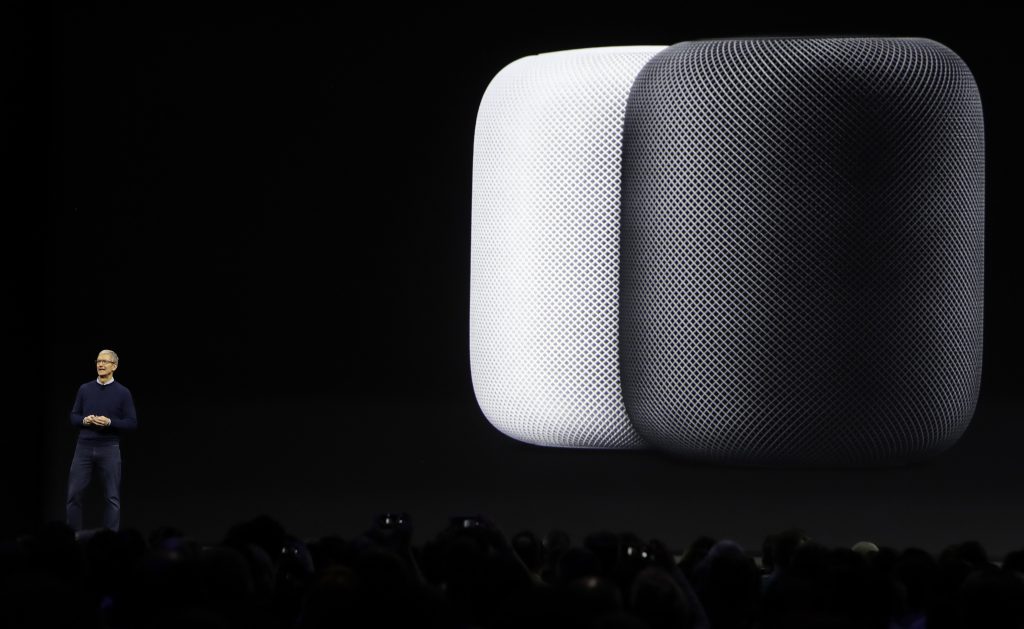 The “HomePod” speaker unveiled Monday is similar to devices from rivals, some of which have been on the market for years. Like the Amazon Echo and Google Home, the HomePod will play music while also helping people to manage their lives and homes. Siri will be voice activated to respond to requests for information and other help around the house.

It is the first new device Apple has announced in almost three years. It unveiled the Apple Watch in September 2014.

Apple “can’t afford to yield valuable real-estate in the heart of people’s homes to Amazon, Google and others,” said Geoff Blaber, research analyst at CCS Insight. That’s especially important because people are starting to access information, entertainment and search in a more “pervasive” way that’s less dependent on smartphones, he said.

The speaker will sell for about $350 in December in the U.S., U.K. and Australia. Amazon sells the main version of the Echo for $180; Google’s Home speaker goes for $130.

The Echo, released in 2015, and Google Home, released last year, were the first entrants in a promising market. The research firm eMarketer says than 35 million people in the U.S. are expected to use a voice-activated speaker at least once a month this year, more than double its estimate from last year.

KEEPING IT REAL WITH VR

But Apple is late to the game on VR. Samsung and Google already have VR systems centered on their smartphones. Facebook, HTC and Sony have high-end VR systems, too.

Virtual reality has been described as the next big thing for decades. But so far, interest has been strongest among gamers, developers and hardware makers rather than everyday users.

Apple’s entry into the market could change this. Its entry into digital-music sales with iTunes, and into the smartphone market with the iPhone, upended those industries and gave them mass appeal.

New features coming to iPhones and iPads include messages that sync to Apple servers in the cloud. These devices will only keep the most recent messages in local storage.

For photos, Apple is turning to a “high efficiency” format to replace the widely used JPEG standard. Although the format is not exclusive to Apple, it’s not yet clear how well the photos will work with non-Apple software and devices, which mostly use JPEG.

Apple is also bringing the ability to send money to friends or other people through its payment service, Apple Pay. So far, the service has limited payments to purchases of products and services from companies and other organizations.

MAC GETS AN UPGRADE

Safari, Apple’s web browser, seeks to make users’ online experience smoother and less annoying. It will allow users to automatically block auto-play videos by detecting videos that shouldn’t be playing when you open a webpage to read an article, for example.

The browser’s new “intelligent tracking prevention,” meanwhile, will use machine learning to identify and block digital-ad trackers in order to keep advertisers from following and profiling users. It will not block the ads themselves, though.

SIZING UP THE IPAD

Apple is introducing an iPad Pro in a new size in an attempt to revive interest in its once hot-selling line of tablets. The new 10.5-inch model offers room for a full-size keyboard, something the 9.7 inch model couldn’t. Yet it isn’t as bulky as the 12.9-inch model.

With consumers less interested in buying new tablets, Apple has increased its focus on designing tablets for professionals to do much of the same work that they usually perform on a laptop computer. It’s also what Microsoft is targeting with the Surface Pro; a new model comes out on June 15.

The new iPad Pro also comes with a better camera — the same one found in the iPhone 7 — along with more storage, a better display and faster refreshing of moving images. The new model starts at $649 and will start shipping next week.

Apple is also updating the operating software for its Apple Watch, including new watch faces, more personalized alerts that use machine learning to tailor information to you based on your routines and tastes.

It also enhanced its workout app to, for instance, support high intensity interval training. It will also be possible to exchange data between gym equipment and the watch.