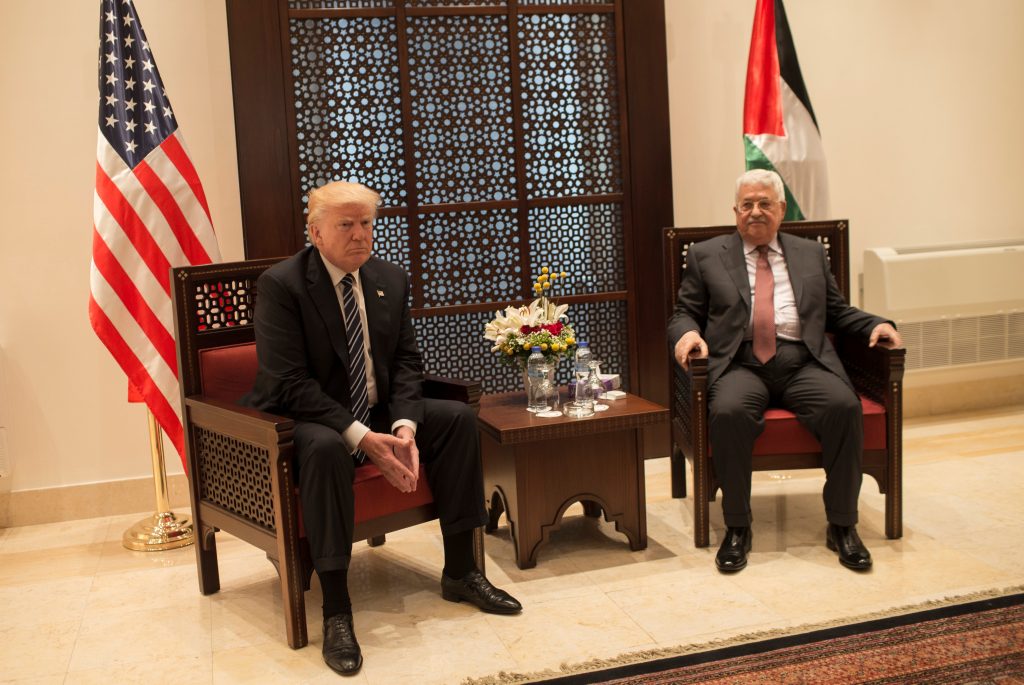 After denying reports that U.S. President Donald Trump had shouted at him during their recent meeting in Bethlehem, Palestinian Authority chief Mahmoud Abbas told top PA officials that his meeting with President Trump had indeed been “unpleasant.” A report on the Al-Araby Al-Jadeed media outlet based in London said that Abbas told PA officials that President Trump was “angry” during the meeting, with the president accusing Abbas of gratuitous incitement on Israel.

A report on Channel Two last week said that President Trump had “yelled” at Abbas, accusing the PA chief of lying to him about his intentions for peace. According to the report, Trump said that contrary to Abbas’s agreeing that he would do everything he could to support peace, Israeli officials had showed him how involved the PA — and he personally — was involved in incitement against Israel. Further details revealed in Yisrael Hayom said that the President told Abbas that he would not ignore the PA’s funding of incitement and furnishing terrorists’ families with funds.

According to the report, Abbas replied that the fault was with Israel, which had stopped participating in a joint committee against incitement that had been set up after the signing of the Oslo Accords. In addition, he said, the PA did not directly pay terrorists or their families, but rather donated money to a fund that took care of that. It was at that point that President Trump lost his patience, banged on the table, and began yelling at Abbas. “You can talk all you want about peace,” the report quoted Trump as telling Abbas. “But you do nothing to promote it.” President Trump said that if the PA could not get its act together, he would promote a regional cooperation agreement between Israel and Arab states, cutting out the Palestinians altogether. Abbas said that he would oppose it, citing backing from Arab states whom he said supported him. Mr. Trump told Abbas that he was wrong; that he had spoken with leaders of Arab states at the summit held in Saudi Arabia last week, and that they had told him that they would cooperate with Trump on the matter, as long as the U.S. could guarantee that the Palestinians’ interests would not be harmed.

The Palestinian Authority issued a denial. “This never happened,” PA officials told local media. “The story had been invented to hurt Palestinian-American relations.” Speaking on Army Radio, former Arab MK Taleb a-Sana, now a senior adviser to Abbas, said that reports on the meeting “should be taken with skepticism. When Trump and Abbas met in Washington, the president encouraged Abbas and spoke to him in a positive manner. And a week later he is telling him that Abbas ‘cheated’ him? It doesn’t make sense.”