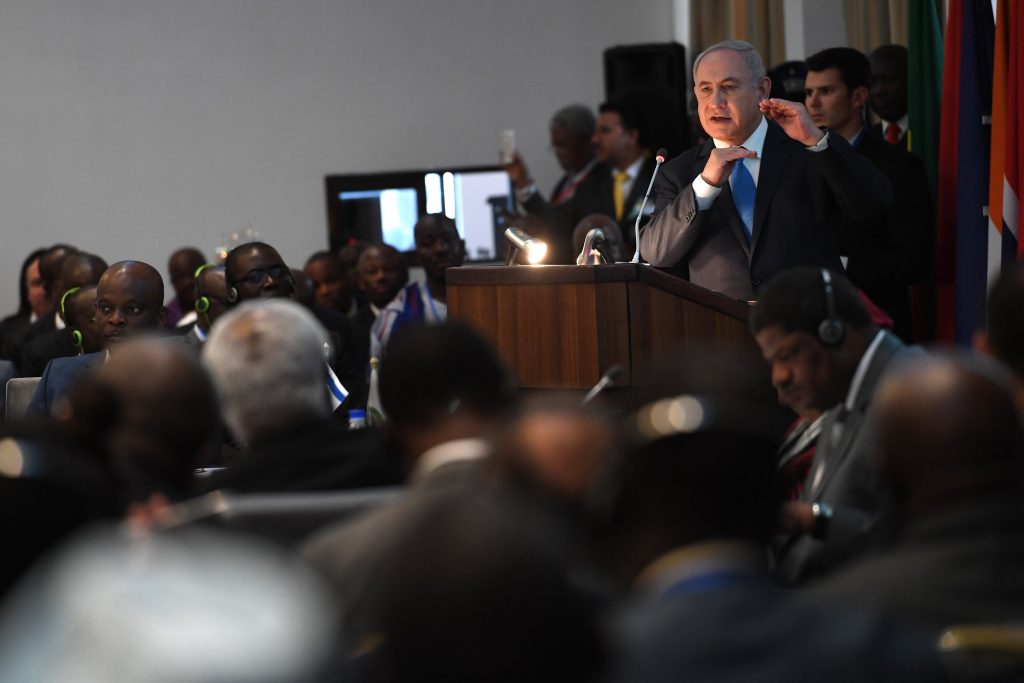 Prime Minister Binyamin Netanyahu was in the Liberian capital Monrovia on Sunday to advance his campaign to enlist African countries on the side of Israel in international forums and develop economic ties.

Netanyahu’s hosts, the 15-member Economic Community of West African States (ECOWAS), postponed its summit from Shabbos to Sunday, in respect for the Jewish day of rest, thus enabling the prime minister to become the first from Israel to participate in the annual gathering.

“This saved us a coalition crisis,” quipped a senior Israeli official.

Not all the countries of Africa are so welcoming. The flight from Israel took 12 hours because it had to bypass several Muslim countries in northern Africa that refuse Israeli planes passage through their airspace. As a result, Netanyahu had to take a circuitous route, across the Mediterranean and then south along the African coast to Liberia, rather than cutting directly across northern Africa.

Netanyahu turned the travel problem to his advantage in his remarks after landing, saying that it was worth flying 24 hours round trip for just a few hours at ECOWAS, much easier than making separate trips to 15 different countries.

Netanyahu spoke on the usual theme of Israeli leadership in technology: “Though small in size, Israel is a world leader in so many fields: in energy, in agriculture, public health, water management, water creation — just creating water literally from thin air — and of course, in the vital area of security.

“Our cows — as an example, our cows produce more milk than any other cow on Earth. It’s a matter of some pride. You’d think — and no offense, Federica — you’d think it would be a Dutch cow or a French cow, maybe an Italian cow or even an American cow. But it’s not. It’s an Israeli cow. Because every moo is computerized, and the results are tremendous productivity.

“And this is why countries like Russia, China, India, are doing all these programs with us, and the benefits that Israel gives to them are the benefits we want to give to the people of Africa. We are the number one country in the world in water recycling. A statistic: We recycle nearly 90 percent of our waste water, 90 percent. The next country is Spain, 17 percent. So it gives you a feeling for the possibilities inherent in technology. It changes the world. Our intelligence has helped stopped terror attacks — dozens and dozens of terrorist attacks all across the world, including in Africa.

“And yet, when I landed here after a long flight from Israel, I found that a somber cloud hangs over this glorious day. This is the cloud of terrorism that has claimed the lives of so many innocent Africans, most recently in Niger and Mali. And in recent hours, another terrible attack was launched on innocent people in the heart of London. We condemn it. We send our condolences to the British people and we pledge our commitment to fight this scourge — this scourge that knows no bounds.”

Also on the agenda was a hoped-for reconciliation with Senegal, a co-sponsor of the anti-Israel U.N. Security Council resolution 2334 in December. In response, Israel downgraded its relations with Dakar and recalled its ambassador.

The prime minister told reporters that Israel will name an ambassador to ECOWAS, who will be based in Israel’s embassy in Nigeria.

The event was marred by a brief scuffle between Israeli and Togolese security personnel, The Jerusalem Post reported. The scrap broke out when more Togolese guards than had been planned for attempted to accompany Togo’s president Faure Gnassingbé to a bilateral meeting with Netanyahu. Fortunately, the fracas was over after just a few seconds.