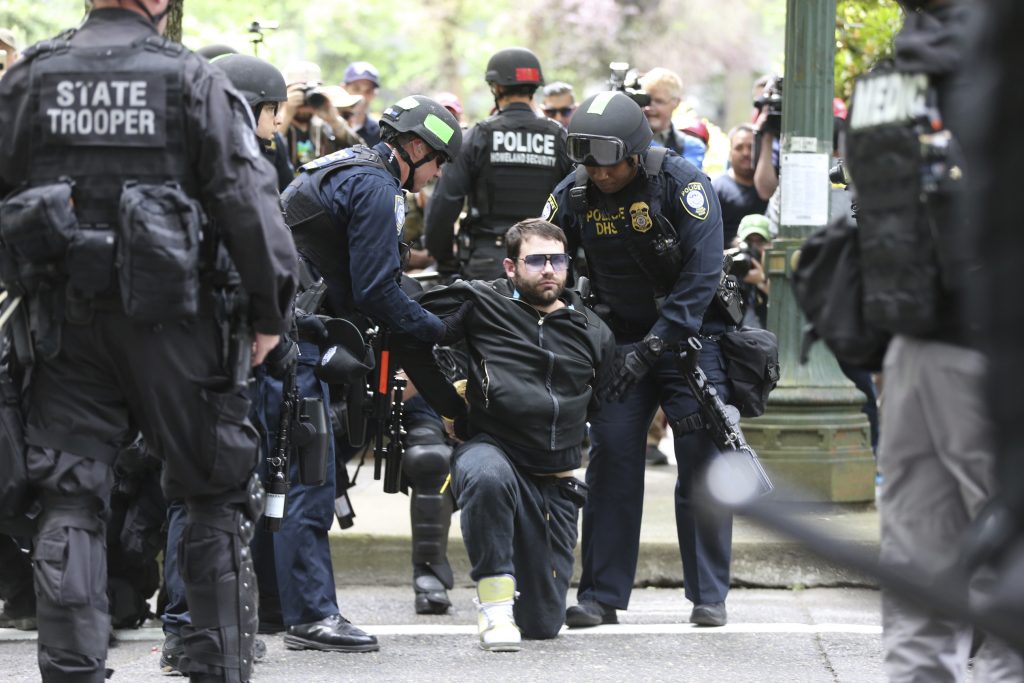 Crowds swelled to several thousand as demonstrators from varying groups converged Sunday afternoon in downtown Portland, Oregon, in the wake of the fatal stabbing of two men who tried to stop another man’s anti-Muslim tirade.

A pro-Donald Trump free speech rally organized by a conservative group called Patriot Prayer drew hundreds to a plaza near City Hall. Rally organizer Joey Gibson told the crowd that the goal is to wake up the liberty movement. “It’s OK to be a conservative in Portland,” he said.

The group was met by hundreds of counter-protesters organized by immigrant rights, religious and labor groups. Many of them filled the steps of City Hall, drummed and played music and held signs, some of which read “Our city is greater than hate” and “Black lives matter.” Some chanted “love, not hate” and “Go home, fascists.”

“We build our hope and our stamina for justice by showing up,” the Rev. Diane Dulin said in a statement ahead of the rally.

Last week Mayor Ted Wheeler unsuccessfully tried to have the permit for the free speech rally revoked, saying it could further enflame tensions following the May 26 stabbings aboard a light-rail train.

The suspect in the light-rail stabbings, Jeremy Joseph Christian, 35, attended a similar rally in late April wearing an American flag around his neck and carrying a baseball bat. Police confiscated the bat, and he was then caught on camera clashing with counter-protesters.

Authorities say that on May 26 Christian killed two men and injured another on the light-rail train when they tried to help after he verbally abused two young women, one wearing a hijab. Christian is charged with aggravated murder and other counts.

In a video posted on social media, Joey Gibson of the group Patriot Prayer condemned Christian and acknowledged that some rallies have attracted “legitimate Nazis.” He described Christian as “all crazy” and “not a good guy.”

Mat dos Santos, the legal director for the American Civil Liberties Union of Oregon, has said it was wrong and unconstitutional for Wheeler to try to stop the demonstrations based on the viewpoint of the organizers.

The concerns over the Portland rally come amid a wider debate in the U.S. about the First Amendment, often in liberal cities like Portland and Berkeley, California, and on college campuses, where violent protests between far-right and far-left protesters have derailed appearances by contentious figures.