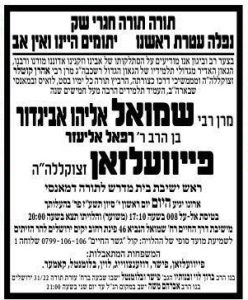 The levayah of Harav Shmuel Faivelson, zt”l, Rosh Yeshivah of Bais Medrash L’Torah in Monsey, who was niftar on Erev Shavuos, is to be held Sunday evening in Yerushalayim.

After a levayah Friday in New York, the aron of the Rosh Yeshivah was flown out Motzoei Shabbos to Eretz Yisrael.

The levayah is tentatively set to leave from Yeshivas Derech Hachaim on Rechov Shmuel Hanavi in Yerushalayim at 8 p.m. local time, and from there proceed to Har Hazeisim where Harav Faivelson will be buried.

Several of the Rosh Yeshivah’s children – his son Harav Boruch Levi and daughters Mrs. Fisher and Mrs. Blumenthal – will be sitting shivah in Yerushalayim, at Rechov Ezras Torah 31. Another son, Harav Avraham Moshe, will be sitting shivah with the family in Eretz Yisrael until Monday night and will later return to New York for the rest of the shivah.