The sun hasn’t cracked the horizon when Alfredo Betancourt and 19 of his countrymen line up behind a packing trailer, knives in hand, knee deep in dewy cauliflower plants.

By the time the dense fog lifts from California’s Salinas Valley, the crew has cut enough cauliflower to fill a dozen produce aisle bins at a local grocery store.

They will crisscross this and dozens of other fields eight hours a day, six days a week, for nine months, sleeping three to a room in hotels long since shunned by tourists. Come December, they’ll board a bus and return to Mexico. Richer, they hope.

More than 11,000 foreign guest workers like Betancourt were approved last year to harvest the lettuce, fruit and vegetables for California’s $47 billion agricultural industry — a fivefold increase from 2011, according to a Los Angeles Times analysis of U.S. Labor Department data.

If this year’s hiring pace holds, that number will continue to rise.

Consumer tastes for fresh strawberries and leaf lettuce — two of the state’s most labor-intensive crops — have driven the boom along a coastal corridor from the Salinas Valley in Monterey County through the Oxnard Plain in Ventura County, according to the Times analysis.

In the Santa Maria Valley alone, the number of agricultural guest workers rose from six sheepherders in 2012 to more than 2,000 laborers last year. 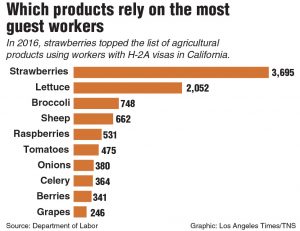 If growers have their way, they will get even more under the visa program known as H-2A and face fewer barriers, delays and regulations.

To do so, they will have to ask President Donald Trump to put an asterisk on his “America first” economic agenda, which promises to crack down on immigration as a way of opening up jobs for Americans.

“I think he has the same philosophy that we’ve had for years, and that is: If you let them in the front door, they won’t have to sneak around and go through the back door,” said Tom Nassif, president and chief executive of the Western Growers Association and a member of Trump’s agricultural advisory committee.

Nassif said the president is ready to swing open the “big beautiful door” he promised in his border wall, even before he builds it, and even as he threatens to crack down on visas for high-tech jobs.

“It’s the only option out there,” said Steve Scaroni, owner of Fresh Harvest, the state’s biggest contractor of guest workers. “There is no other option.”

That’s because non-immigrant Americans are not eager to pick crops, despite wages that are rising faster than the state average, according to a Times analysis.

Meanwhile, the largely immigrant farmworkers already here, half of whom are believed to have crossed the border illegally, are getting older and moving to other jobs, or lying low in fear of deportation.

And they’re not being replenished with other immigrants. The border has become too difficult to cross, Mexico’s birthrate has plummeted and new economic opportunities have opened for the rural population that used to leave for the United States, immigration experts say.

Growers say foreign guest laborers have largely kept their crops from rotting in the field, though several growers have lost millions of dollars over the last few years.

“You’re either reducing your acreage or you’re going for H-2A; it’s not a matter of, ‘Can I pay less for H-2A workers?’” said Jeanne Malitz, a San Diego immigration attorney who specializes in guest worker applications.

Labor activists say the rapid escalation of worker recruitment has spawned abuse. In some egregious cases, employers held workers in indentured servitude, demanded kickbacks, did not provide free lodging and skimped on wages, according to court records.

Desperate to be selected again next season, guest workers are unlikely to complain about work and living conditions, activists say. That shifts power back to growers, who have been fined for ignoring local applicants or firing U.S. workers to make room for their foreign guests.

“For all practical purposes, once you decide to go H-2A, you don’t usually find or hire U.S. workers,” said Philip Martin, an agricultural economist at UC Davis. “It does happen, but it’s rare.”

Workers press by the thousands into public plazas of border towns for a shot at a contract that this year will pay $12.57 an hour in California and includes lodging, transportation and visa expenses, and three meals a day at a cost of less than an hour’s wage.

Angel Pompa landed a contract with Elkhorn Packing, one of the top multistate companies that hires by the thousands. With a vocational degree, he had worked as a physical education teacher at a Mexicali elementary school, but never saved enough to get ahead.

“I work four months in Yuma (Ariz.) and take home more money than I made in those six years,” Pompa said. “With all that study, you barely get into the middle class. Here, what I earn makes me upper middle class.”

Pompa and Betancourt were staying in adjacent rooms of a downtown Salinas hotel that hasn’t welcomed a tourist in two years. (Even then, it earned a Yelp review that said, “Do not stay here if you value your life!”) Last August, a two-alarm fire destroyed the gutted reception office. But the decay has been reversed — a new roof is being installed and the rooms in their wing are refurbished, equipped with a double bunk and single bed, as well as clothing lockers.

Workers pass their evenings kicking a deflated soccer ball across the cracked asphalt of the interior parking lot, with sawhorses as goal posts. When the sun sets, they wander alone to a quiet spot, or lie under the covers of their bunks and whisper into their phones to wives and children they won’t see for months.

You try not to think about how you miss them, Betancourt said. You focus on the things your family will miss if you don’t work. Like bottled water for baby formula. A couple of years ago, before he found the H-2A program, Betancourt was awakened by his wife, who said they had run out. Betancourt, who had been picking crops for $10 a day in the Mexicali Valley, was broke.

“I started crying,” Betancourt said. “But I’m not the type of guy who would go steal so my family can eat. … I got a bucket, I got two rags, I got a brush and I got dish-washing soap, and I went and looked for a car and I asked people, ‘Hey, do you want me to wash your car?’”

Four bucks a car, one car after another, “Just to buy water and milk and have a nice breakfast,” he said.

Betancourt’s mother, a factory worker, told him about a recruiter for Elkhorn looking for workers for the winter season in Yuma. He got hired and off he went.

The next season, he used his H-2A savings to buy a car for his wife.

“I plan on making myself a house now,” he said. “Start with two or three rooms — my living room and a bedroom. Start with something.”

More than 250 guest workers who picked strawberries for three seasons at a family farm near Watsonville, Calif., wanted a little something too. They wound up working off nearly $285,000 in kickbacks for visas, and $280,000 in illegal rent for lodging, both of which are supposed to be free, according to the Labor Department.

By the time a judge imposed $2.4 million in penalties on Fernandez Farms last year, all of its assets had been sold in bankruptcy, some of them to a nephew of the owner, Gonzalo Fernandez, according to court records.

Gonzalo Fernandez was banned from the program for the maximum three years, but his sister, Celia, formed a new company, CFE Farms, at the same address.

A judge rejected efforts to add Celia Fernandez and CFE to her brother’s prosecution. Meanwhile, in Chicago, the Labor Department office that handles H-2A applications approved 30 workers for CFE Farms in 2016. This season, it approved an additional 36, who will live in trailers on her brother’s former farm.

Celia Fernandez denied the allegations during her brother’s prosecution and did not respond to requests for comment.

The Labor Department says it doesn’t have enough investigators to keep up with rogue recruiters. An audit found that in many cases, the statute of limitation expires before investigations are completed.

Meanwhile, Congress has ordered the department to speed up its review of growers’ requests for workers, leaving it with about 15 business days to vet applications that surpassed 10,000 last year.

The office approved 97 percent of applications from 2012 to 2015, according to Labor Department data. About 100 employers were debarred during that time.

Growers who do comply with the regulations say the process is archaic and labyrinthine, passing through at least four agencies, some of which still rely on paper and postage stamps, or don’t have enough staff to answer phones.

Delays at consular offices that issue visas have left growers with millions of dollars in rotting crops.

Growers have to guess, as much as two months ahead, when they’ll need workers and prove that they’ve sought U.S. workers through paid advertisements that seem to draw few, if any, applicants.

“We’re not going to get domestic workers, and if we get any, they’re probably not going to last long if they even show up at all,” said Nassif, who wants the requirements loosened.

Western Growers also wants to make it easier for workers to return and to shift the whole program to the Department of Agriculture.

“There have to be labor violations or they wouldn’t be making money,” said Corrie Arellano, an attorney for the nonprofit California Rural Legal Assistance, which has brought several lawsuits on behalf of cheated guest workers.

Some of those workers have been stung twice. Four farmworkers from Michoacan, Mexico, left Fernandez Farms in 2013 to pick strawberries for Yolanda Chavez, a small-scale grower in the Santa Maria Valley.

Not much changed, except this time they paid a higher kickback — $3,000, instead of $1,650 at Fernandez Farms, according to court records.

All were told not to leave the house without permission, an apparent violation of human-trafficking laws, according to court records.

Chavez has 20 more guest workers this season, housed at a motel and in the back unit of a subdivided clapboard house in Santa Maria, according to federal records.

Workers at the house said they could not speak to anyone unless “la duena” — the boss — was present.

They called Chavez, who drove up minutes later.

Chavez at first denied knowing of any lawsuit, then said “those people” never worked for her.

A man pulled up in a pickup and told her to stop talking. He ordered reporters off the property.

“Without permission from the boss of the visa, you can’t talk to anyone,” he said. “Not even the federal government can.” 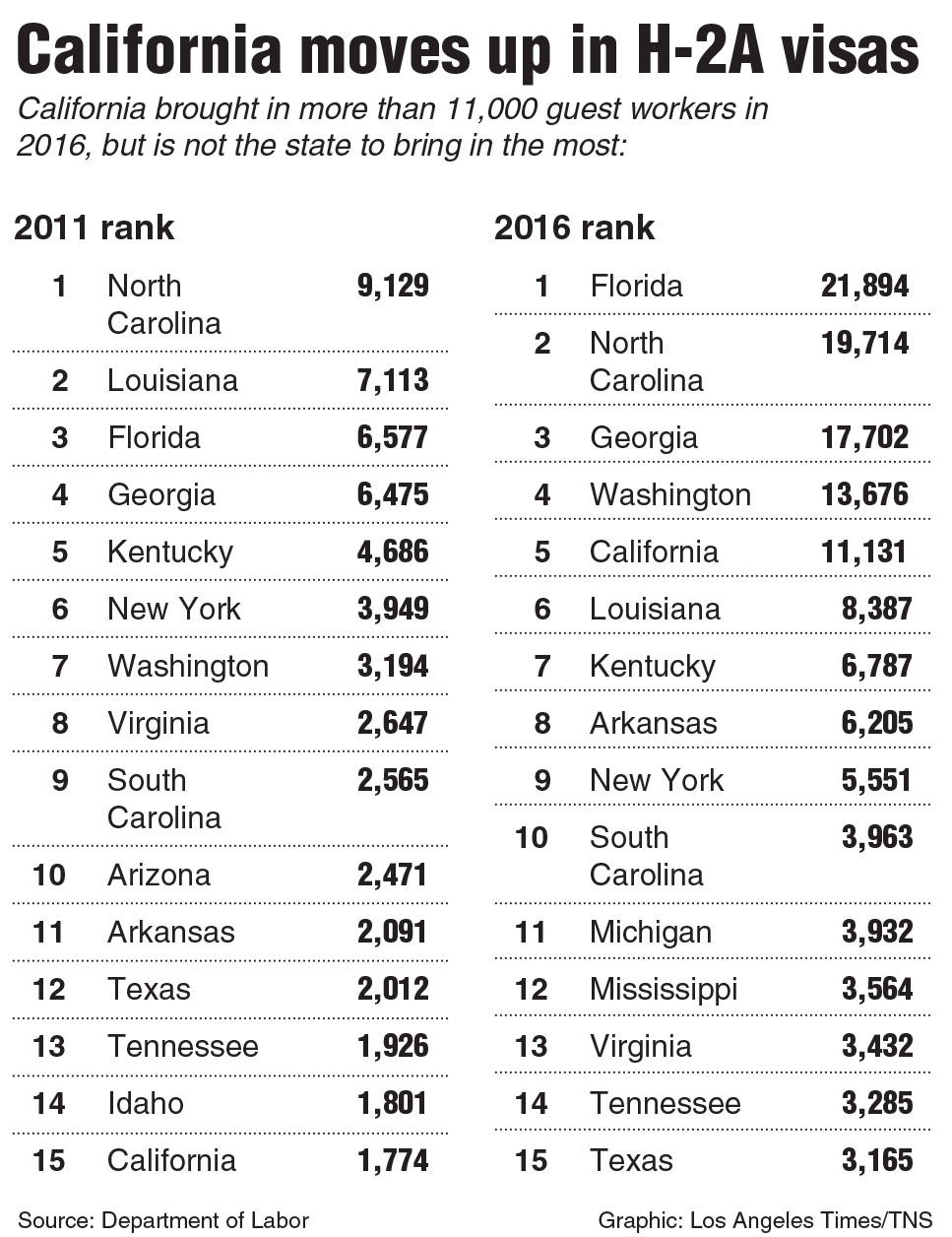 H-2A workers, like any other visa holders, are free to come and go, and even talk with unions. Curbing those civil liberties violates several laws, including those protecting against human trafficking.

“You don’t own the workers,” said Dawson Morton, director of labor and civil rights litigation for the California Rural Legal Assistance Foundation. “The workers are supposed to be free to have any interaction they want. When they are your tenants, you can’t tell them they can’t have visitors.”

Chavez’s workers are picking strawberries on 20 acres she leases southeast of Santa Maria. They will work there until Dec. 6.