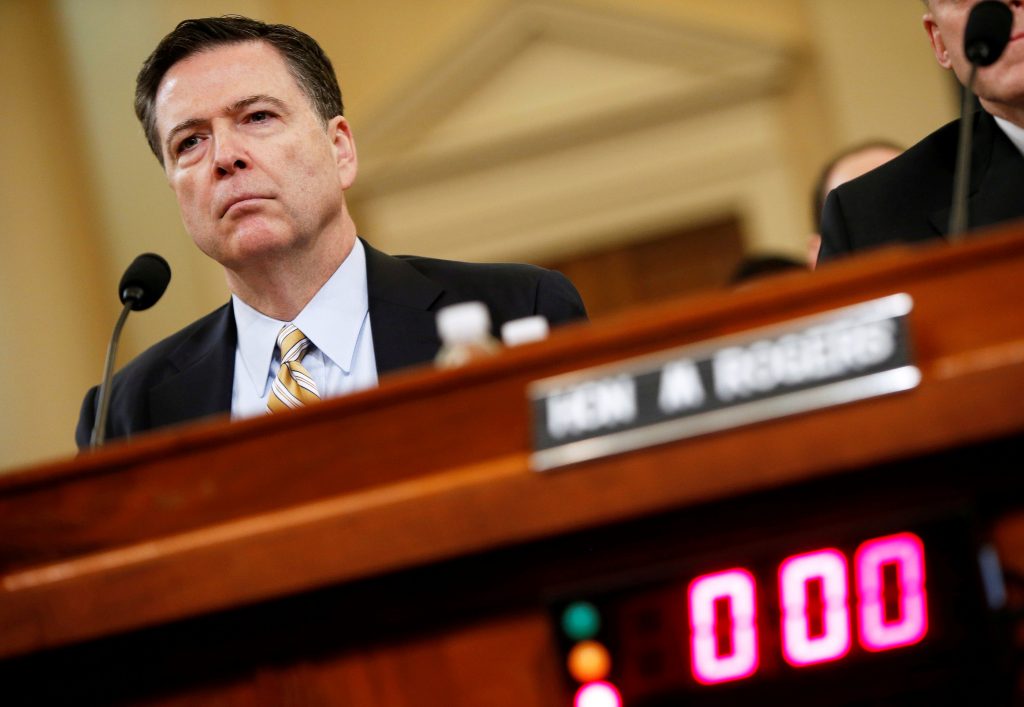 Former FBI Director James Comey will be grilled on whether President Donald Trump tried to get him to back off an investigation into alleged ties between the Trump campaign and Russia, key U.S. senators said on Sunday ahead of Comey’s testimony this week on Capitol Hill.

Comey, who was leading the Federal Bureau of Investigation’s probe into alleged Russian meddling in last year’s U.S. presidential election, was fired by Mr. Trump last month, four years into his 10-year term.

The move sparked accusations that Mr. Trump dismissed Comey to hinder that investigation and stifle questions about possible collusion between his campaign and Russia.

“I want to know what kind of pressure, appropriate, inappropriate, how many conversations he had with the president about this topic?” Senator Mark Warner, the top Democrat on the Senate Intelligence Committee, told CBS’s “Face the Nation” program on Sunday.

The former FBI chief is due to testify on Thursday before the intelligence committee as part of its own Russia-related investigation.

After Comey’s dismissal, news reports emerged that Mr. Trump asked Comey to end the probe into former national security adviser Michael Flynn during a February meeting in the Oval Office, the day after Flynn was fired for misrepresenting his contacts with the Russian ambassador.

The account, first reported by the New York Times, was based on a memo Comey wrote after the meeting.

The Comey memo caused alarm on Capitol Hill and raised questions about whether Mr. Trump tried to interfere with a federal investigation.

“It would be unthinkable if the president actually did what was reported, asked FBI Director Comey to, in effect, back off, of at least the investigation into General Flynn,” Warner said.

U.S. intelligence agencies concluded in January that Moscow tried to sway the November vote in Mr. Trump’s favor. Russia has denied involvement, and Mr. Trump has denied any collusion between his campaign and Russia.

Russian President Vladimir Putin said in an interview that he does not have any relationship with Flynn and only spoke briefly with Flynn when he sat next to him at a 2015 dinner for Russian TV network RT.

“I made my speech. Then we talked about some other stuff. And I got up and left,” President Putin told a NBC News program. “That’s it. I didn’t even really talk to him. That’s the extent of my acquaintance with Mr. Flynn.”

Republican Senator Susan Collins, who sits on the Senate Intelligence Committee, said she is eager to question Comey to find out more about Mr. Trump’s allegation that Comey told him on three separate occasions that he was not under investigation.

“We need to hear directly from Mr. Comey on these important issues,” Collins told “Face the Nation.”

“The tone, the exact words that were spoken and the context are so important and that’s what we lack right now and we can only get that by talking to those directly involved,” she said.

Mr. Trump has called the investigation into alleged ties between his campaign and Russia a “witch hunt” designed to undermine the legitimacy of his electoral win.