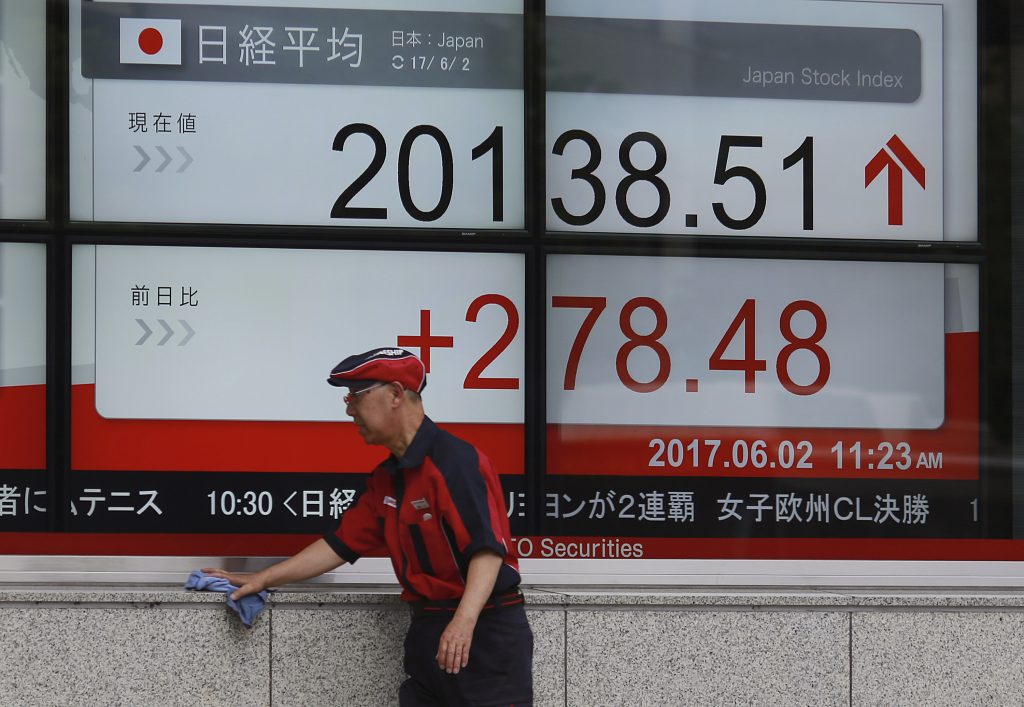 The MSCI ACWI, an index of 46 stock markets in the world, rose 0.2 percent to a record high. It was on track for a gain of 0.6 percent for the week and close to 11 percent for the year to date.

European shares were also expected to advance, with spread-betters looking at gains of 0.6-0.7 percent for Germany’s DAX, France’s CAC and Britain’s FTSE.

“Market sentiment is very good. The strength in Wall Street shares will be a tailwind for the Nikkei as well,” said Masahiro Ichikawa, senior strategist at Sumitomo Mitsui Asset Management.

Wall Street’s volatility index, which measures implied volatility of stocks and is often seen as investors’ fear gauge, fell below 10, near a decade-low touched last month, in another sign of investors’ confidence that markets will be stable at least for the time being.

The Institute for Supply Management said its barometer of U.S. factory activity edged up to 54.9 last month from 54.8 in April, while ADP reported private payrolls grew by 253,000 last month, beating analysts’ median forecast of a 185,000 increase.

Those numbers offset weakness in auto sales and set markets up for solid government payroll data due at 8:30 a.m. Friday.

“The U.S. slowdown in the first quarter was due to soft consumption. But consumer spending has started to recover already in March,” said Haruka Kazama, senior economist at Mizuho Research Institute.

“Labor market conditions are improving as we can see from yesterday’s ADP data, which also supports consumption.”

Further signs of solid U.S. growth led traders to almost fully price in the chance that the Federal Reserve will raise interest rates at its June 13-14 policy meeting. They also supported the outlook for possibly another hike by the year-end, likely in September.

That helped the dollar recover in the foreign exchange market, although traders said concerns about U.S. politics could cap its gains.

Former FBI Director James Comey will testify next Thursday before a U.S. Senate panel investigating Russia’s alleged meddling in the 2016 U.S. election, in a hearing that could add to difficulties facing President Donald Trump.

“People may be waiting for the payroll data. Or they may be looking beyond that and want to focus on political instability and next week’s testimony,” said Kyosuke Suzuki, director of forex at Societe Generale.

Europe’s manufacturing sector continues to expand at a solid pace. The IHS Markit’s Manufacturing Purchasing Managers’ Index for the euro zone rose to 57.0 in May, up from April’s 56.7 and its highest level since April 2011.

Further signs of recovery could prompt the European Central Bank to sound a little more optimistic on the economy at its June 8 meeting. It could raise its assessment of risks to balanced or begin discussing shift from its bias to ease policy, a Reuters poll of economists showed.

Elsewhere in currency markets, the offshore Chinese yuan eased 0.5 percent after having hit its highest level since October the previous day.

The currency has surged since last week, when Moody’s downgraded China’s credit rating and Chinese authorities announced they were adjusting the formula used to set the daily yuan midpoint.

The latter change has been seen as a signal that China will no longer tolerate much depreciation against the dollar and is setting the currency on a firmer path.

Oil prices were dragged down by ongoing concerns over a global glut in crude supply despite a bigger-than-expected draw in U.S. crude inventories.