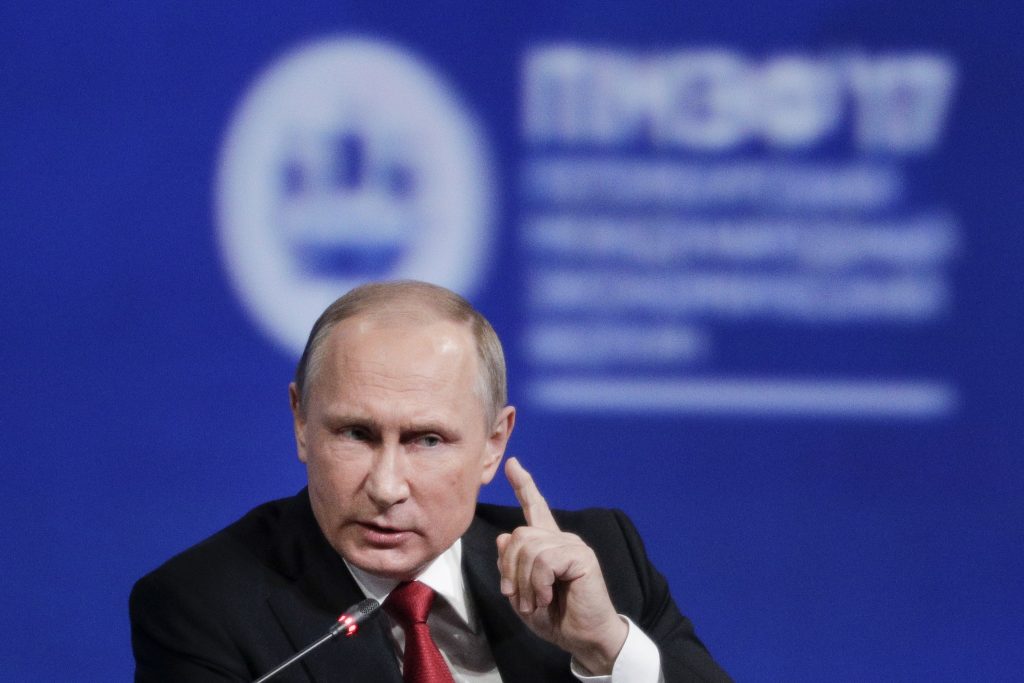 Russian President Vladimir Putin insisted Friday that Syrian President Bashar Assad didn’t use chemical weapons against his people, saying that the recent attack that killed scores of civilians was a “provocation” against Assad.

Speaking at an economic forum in St. Petersburg on Friday, Putin made one of his strongest rejections of blaming Assad’s forces for the chemical attack in April. The attack in northern Syria killed at least 90, including many children. It was followed by an unprecedented U.S. strike on a Syrian air base from which aircraft suspected of being involved in the chemical raid had taken off.

“We are absolutely convinced that it was a provocation. Assad didn’t use the weapons,” Putin said. “It was done by people who wanted to blame him for that.”

He added that Russian intelligence had information that a “similar scenario” was to be implemented elsewhere in Syria, including near Damascus.

“Thank G-d, they were smart enough not to do that after we released information about it,” he said.

The attack in the town of Khan Sheikhoun caused an international uproar as images of the aftermath, including quivering children dying on camera, were widely broadcast.

Russia, one of Assad’s closest allies, and the Syrian government have repeatedly denied using chemical weapons. Following an equally fatal chemical attack in 2013, Syria agreed to destroy its chemical weapons under a deal brokered by Russia and the United States, and declared a 1,300-ton chemical arsenal when it joined the Organization for the Prohibition of Chemical Weapons.

That stockpile has been destroyed, but the organization continues to question whether Damascus declared everything in its chemical-weapons program.

This year, the new U.S. administration of President Donald Trump was quick to react. In a one-off, the U.S. struck a Syrian air base with cruise missiles only days after the April 4 attack after accusing Assad’s military of killing scores of civilians with a nerve agent launched from the base.

Putin said Russia had offered the U.S. and its allies the chance to inspect the Syrian base for traces of the chemical agent and criticized them for their refusal to do so.

Putin said a quick inspection of the air base would have revealed traces of toxic agents if it indeed had served as a staging ground for the attack as the United States had charged.

“Modern control equipment would have shown that chemical weapons had been on that particular plane or site in the base,” Putin said. “No one wanted to. There was a lot of talk, but zero action.”

He also criticized the international monitors for dragging their feet on visiting the town that came under attack citing safety concerns, adding sarcastically that the West claimed the area was controlled by moderate opposition fighters so it shouldn’t have been dangerous to visit.

Last week, a team from the international chemical-weapons watchdog found exposure “to sarin or a sarin-like substance” in samples it examined from the April 4 attack and said it is planning a trip to visit the opposition-held town of Khan Sheikhoun in Idlib province in northern Syria.

An al-Qaida-linked alliance has presence throughout the opposition stronghold Idlib, but other rebel groups also operate there.

The OPCW asked the U.N. for logistical and security assistance to arrange for the trip to ensure that any visit to the site “would be accompanied by the most stringent security assurances.” The U.N. approved the request in early May.

The team has conducted interviews with victims of the alleged attack and witnessed the collection of biomedical samples from casualties. It also received samples from dead animals reported to have been close to the site of the incident and environmental samples from near the impact point.

OPCW fact-finding teams have been investigating the alleged use of chemical weapons in Syria but aren’t mandated to determine responsibility for attacks. That has been left to a joint U.N.-OPCW investigative body.

Putin said Assad is not without mistakes but investigation into his adversaries’ actions must also be pursued.

“Has Assad made mistakes? Yes, quite a few,” said Putin. “And what about people confronting him? Are they angels? Who are they who kill people there, execute children? Are they people who we should support?”

As to his goals in Syria, Putin said: “Primarily, we are defending not Assad but the Syrian statehood. We don’t want to see the situation there become like it is in Libya, Somalia or Afghanistan.”