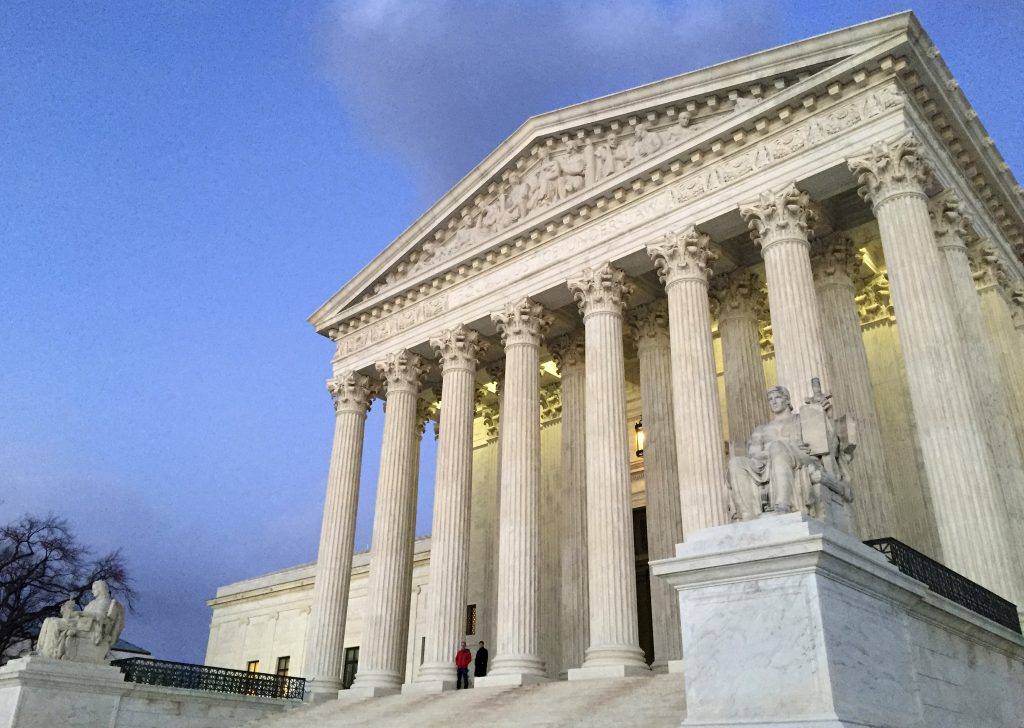 The Trump administration on Thursday asked the Supreme Court to let it move forward with the president’s plan to temporarily ban citizens from six mostly Muslim countries, elevating a divisive legal battle involving national security to the nation’s highest court.

Department of Justice lawyers asked the court to overturn a decision of the full U.S. Court of Appeals for the 4th Circuit that kept in place a freeze on President Donald Trump’s revised ban.

The 10-3 ruling last week was one in a series of legal defeats for the administration, as judges across the country have said Trump’s claim of protecting the nation was cover for making good on a campaign promise to ban Muslims from entry into the United States.

The government’s filing late Thursday asks the justices to set aside the 4th Circuit ruling and accept the case for oral arguments. It also asks the high court to lift a nationwide injunction issued by a federal judge in a separate Hawaii case. A panel of the U.S. Court of Appeals for the 9th Circuit, which covers Hawaii, heard the government’s arguments in that case last month, but has not yet ruled.

Justice Department spokeswoman Sarah Isgur Flores said Thursday that the administration is “confident that President Trump’s executive order is well within his lawful authority to keep the nation safe and protect our communities from terrorism.”

“The President is not required to admit people from countries that sponsor or shelter terrorism, until he determines that they can be properly vetted and do not pose a security risk to the United States.”

The president’s travel order has been one of the most controversial of the young Trump administration, as the first entry ban created chaos at airports around the world and prompted major protests here and abroad.

Trump has denounced judicial decisions freezing the ban as unprecedented assaults on the his power to fulfill his most important role, keeping the nation safe.

It would take the votes of five of the nine justices to grant the government’s request, and require a finding that the government was likely to prevail on the merits of its argument – and that it would be irreparably harmed if the 4th Circuit’s decision remained in place.

The timing of case is tricky: the process of briefing, arguing and deciding a case at the Supreme Court takes months. The justices are scheduled to end their work at the end of the month. And the ban, if it is allowed to be enforced, is proposed as temporary, just to give the government 90 days to study and implement new vetting procedures. Acting solicitor general Jeffrey Wall has said that the ruling in the Hawaii case has prevented the government from moving forward on those objectives.

Trump on Jan.27, just a week after inauguration, issued the first travel ban executive order. It barred the entry of citizens of seven majority-Muslim nations (Iraq, Iran, Somalia, Sudan, Yemen, Syria and Libya), ordered a temporary halt to refugee arrivals and would have eventually given preference to those who were religious minorities in their countries, such as Christians.

Several judges and a panel of the U.S. Court of Appeals for the 9th Circuit shut it down.

Trump vowed to go to the Supreme Court that time, too, but eventually issued a new order. That order, the subject of the 4th Circuit ruling, removed Iraq from the list, deleted references to religion and added national security rationales for the policy.

But it was stopped by federal district judges in Maryland and Hawaii.

In the 4th Circuit, which covers Maryland, six judges agreed in full with an opinion by Chief Judge Roger Gregory that the national security rationale advanced by the president was simply pretext for unlawful animosity toward Muslims, and an attempt to make good on a campaign promise to bar Muslims from entry into the country.

He cited Trump’s campaign rhetoric and statements made when he signed the executive orders, and said courts had an obligation to look beyond their seemingly neutral language.

The order “speaks with vague words of national security, but in context drips with religious intolerance, animus, and discrimination,” Gregory wrote. “Surely the Establishment Clause of the First Amendment yet stands as an untiring sentinel for the protection of one of our most cherished founding principles-that government shall not establish any religious orthodoxy, or favor or disfavor one religion over another.”

Two of the judges agreed with the majority that the order likely violates the constitutional command that government not favor or disparage one religion over another. But they also said the order was not justified under the power that Congress gives the president by law.

Congress later added, though that “no person shall receive any preference or priority or be discriminated against in the issuance of an immigrant visa because of the person’s race, [gender], nationality, place of birth, or place of residence.”

Judge Barbara Milano Keenan said that Trump had made no finding that the citizens of the six countries provided a specific threat to the U.S. And Judge James Wynn Jr. said Congress did not give the president power to take action based on “invidious discrimination.”

All of the judges ruling against Trump were nominated to the appeals court by Democratic presidents. The three dissenting judges were nominated by Republicans, and said their colleagues had wandered into uncharted territory by relying on campaign statements to find an Establishment Clause violation.

“The Supreme Court surely will shudder at the majority’s adoption of this new rule that has no limits or bounds – one that transforms the majority’s criticisms of a candidate’s various campaign statements into a constitutional violation” wrote Judge Paul Niemeyer.

And the others said that the majority cast aside the enormous power that the president possesses to take actions that keep the country safe.

“The real losers in this case are the millions of individual Americans whose security is threatened on a daily basis by those who seek to do us harm,” wrote Judge Dennis Shedd.