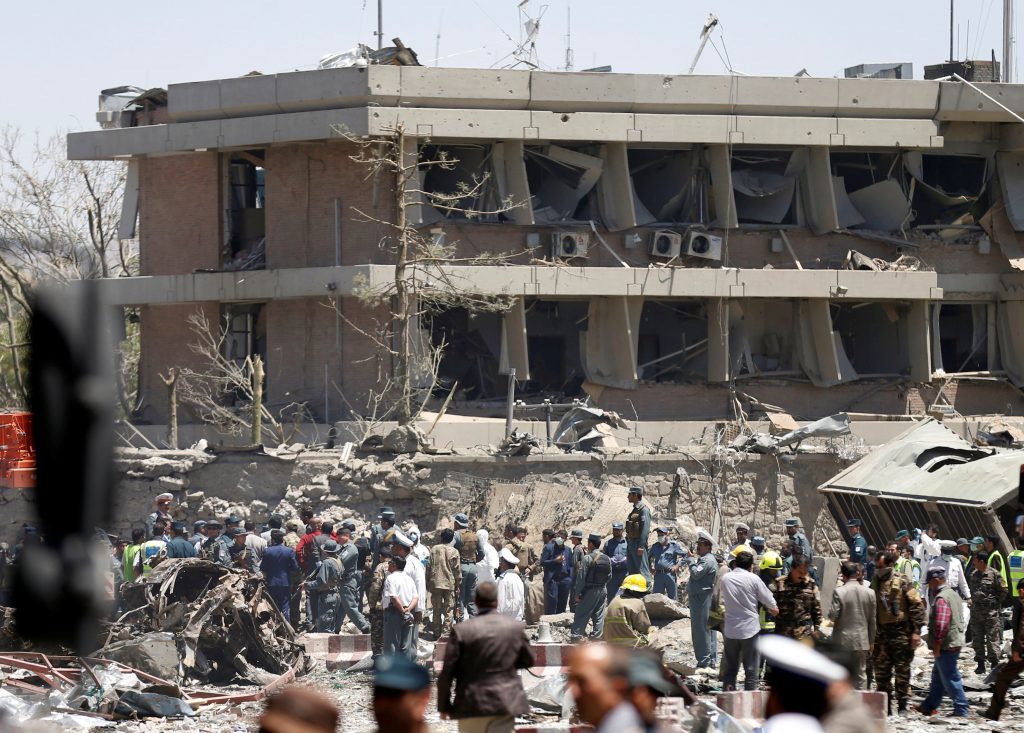 Afghans mourned the loss of family members, friends and colleagues on Thursday, a day after a massive truck bomb exploded in the capital, leaving at least 90 people dead and more than 450 others wounded in one of the worst terror attacks since the drawdown of foreign forces from Afghanistan in 2014.

The city’s acting mayor said the explosion damaged property as far away as 2.5 miles from the blast site, and scores of people waited in hospitals to learn the status of family and friends wounded in the attack. Funeral processions took place throughout Kabul on Thursday.

The bomber drove into Kabul’s heavily guarded diplomatic quarter during the morning rush, leaving behind chaos and destruction. Most of the casualties were civilians, including women and children, but the dead also included Afghan security guards.

There was no claim of responsibility.

The explosives were hidden in a tanker truck used to clean out septic systems, according to Najib Danish, deputy spokesman for the interior minister. The trucks are common in Kabul, a city of nearly four million people with no sewage system that mostly depends on septic tanks, and where open sewers are common.

The blast gouged a crater about 15 feet deep near Zanbaq Square in the Wazir Akbar Khan district, where foreign embassies are protected by their own security personnel as well as Afghan police and national security forces. The nearby German Embassy was heavily damaged.

Also in the area is Afghanistan’s Foreign Ministry, the Presidential Palace and its intelligence and security headquarters, guarded by soldiers trained by the U.S. and its coalition partners.

The city’s acting mayor, Abdullah Habibzai, said an initial estimate put the total damage from the bombing at 1 billion Afghanis ($1.5 million), but said that number could rise.

He said city workers had removed around 200 large truckloads of garbage and debris by Thursday morning.

“We have transported a large number or a large amount of broken glass and windows,” he said.

Afghanistan’s war, the longest ever involving U.S. troops, has shown no sign of letting up and the introduction into the battle of an Islamic State group affiliate has made the country only more volatile.

Although they are small in number, militants from the Islamic State in Khorasan — an ancient name for parts of Afghanistan, Iran and Central Asia — have taken credit for several brazen assaults on the capital.