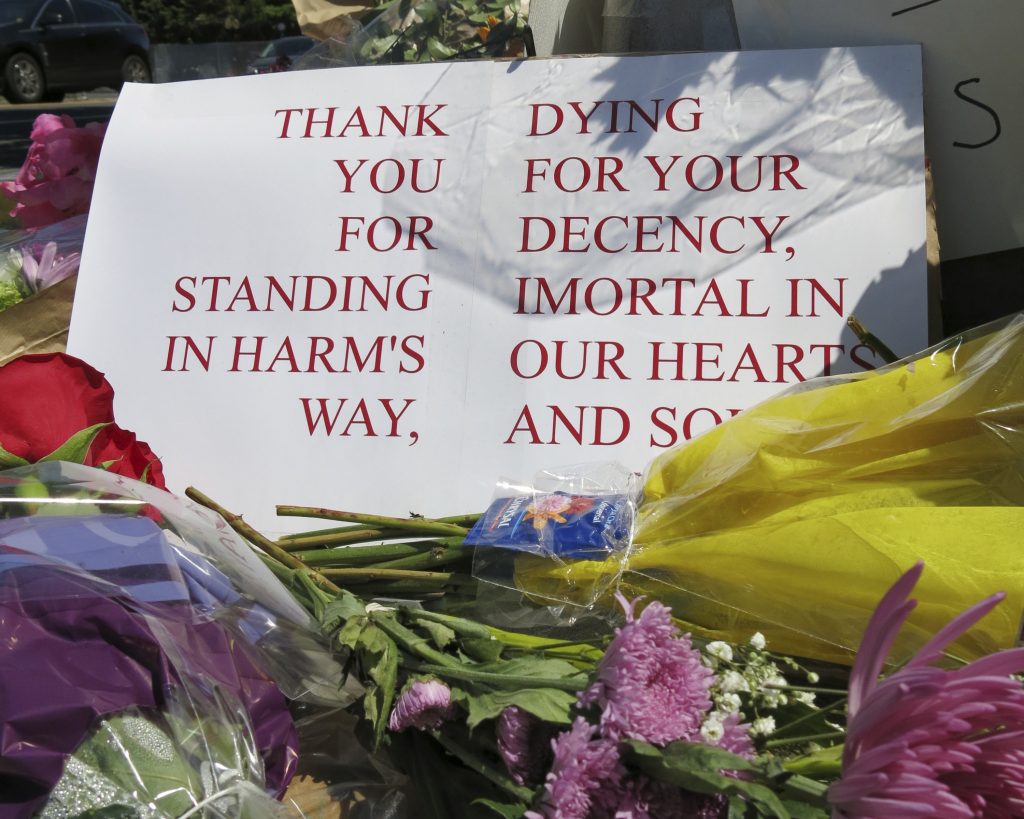 President Donald Trump on Monday condemned the fatal stabbings of two Good Samaritans who tried to stop a man from harassing a pair of women who appeared to be Muslim.

A third man who also came to the aid of the women suffered serious wounds in the attack on a Portland commuter train on Friday, hours before the start of Ramadan. One of the women tearfully thanked the men for their sacrifice.

“The violent attacks in Portland on Friday are unacceptable. The victims were standing up to hate and intolerance. Our prayers are w/ them,” Trump said in a tweet before taking part in a wreath-laying ceremony at Arlington National Cemetery.

The suspect, Jeremy Joseph Christian, 35, remained in custody on Monday and will appear in state court on Tuesday on aggravated murder and other charges.

A convicted felon from Portland, Christian was shouting ethnic and religious slurs to intimidate two women riding on a aboard a MAX light-rail train, according to one of the women and other witnesses.

“He told us to go back to Saudi Arabia and that we shouldn’t be here and to get out of his country,” said Destinee Mangum, who was on the train with a friend wearing a Muslim head scarf.

“He was telling us that basically we weren’t worth anything and we should just kill ourselves,” she said in a video posted on CNN’s website on Monday.

Three men aboard the train intervened, with one of them saying, “You can’t disrespect these young ladies like that,” Mangum said in the video.

In a tear-choked voice, Mangum said she did not know the men and thanked them for putting their lives on the line.

“They lost their lives because of me and my friend and the way we look,” Mangum said.

The FBI is investigating the stabbings to determine whether to possibly charge Christian with terrorism or a federal hate crime, said Portland FBI spokeswoman Beth Anne Steele.