Politics OPINION: The Case for Kushner. And Trump
Politics 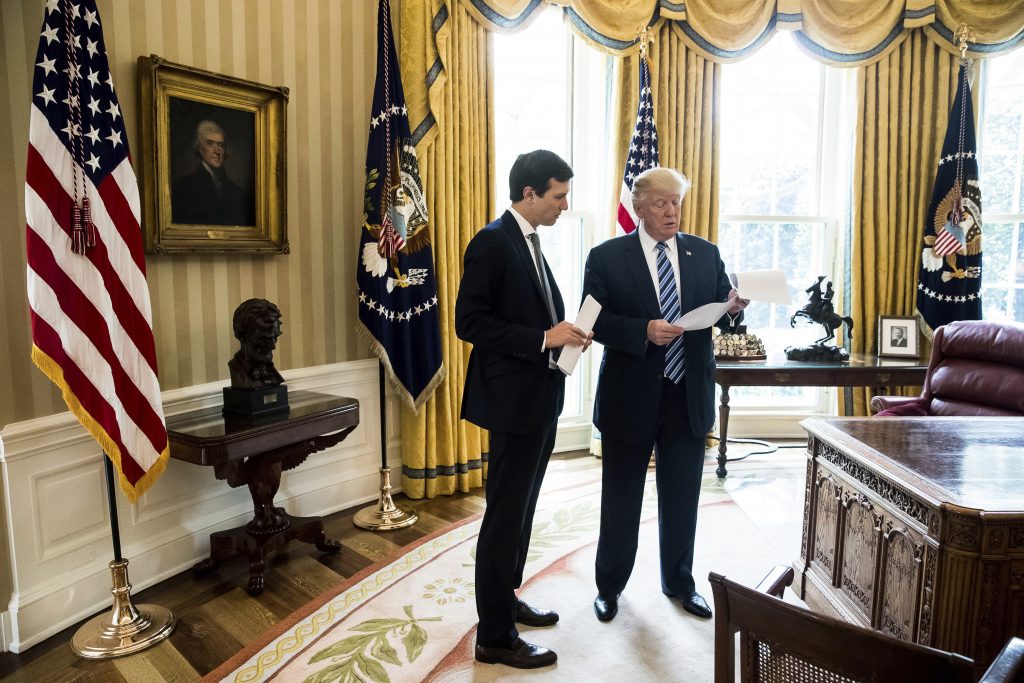 An old joke centers on a shtiebel a century ago, when a member of the congregation bangs on the bimah just as the chazzan concludes chazaras hashatz (the chazzan’s repition of Shemoneh Esrei).

No Tachanun that day.

For those who didn’t get it yet, Chof Sivan, or the 20th day of Sivan, is an ancient taanis tzaddikim, a day if any when Tachanun should be said. But for kehillos where the instruction to skip the tefillah on “special days” is taken liberally, not much thought was put into the thwack on the bimah.

A member of the flock said something, and Tachanun was off for the day.

No comparison, but the political atmosphere in Washington strongly resembles that joke.

Watergate figures are then interviewed to explore the connections. The New York Times coincidentally publishes an article delving into the constitutional proceedings if a president is convicted.

And that’s all it takes. A member of the flock said something, and “impeach” is the word of the day.

As someone who has been steeped in politics for the better part of the past decade, I am frequently approached by people wondering what will happen.

“So what’s gonna be with Trump?” is a usual conversation-opener. Another one: “I’m so depressed about the news, I’m tuning out.” (This, followed a week later by the same avowal.)

Here’s what I tell them:

Let’s take a step back. For one, contrary to what many of you think, and contrary to what some of you may hope, there’s no proof — not a scintilla of evidence — that President Trump or any member of his team has coordinated with Russia to sway the election. In fact, there’s barely any proof that Russia had anything more than negligible influence over the election in the first place. If they even tried.

Don’t take my word for it. Every single official investigating the Russia connection — from the House and Senate intelligence committees to the heads of the FBI and NSA, to the Obama-era head of the CIA — say this. Some have to have it extricated via verbal pliers, while others offer it willingly. But they’re all in agreement that there’s no evidence Donald Trump or any member of his team has done anything wrong.

Here’s where the joke comes in. There’s no arguing that the media, while always supportive of the Democratic side, went completely in the bag for them ever since Mr. Trump appeared. By media I refer to The Associated Press, the Washington Post, The New York Times, Politico, CNN, et al. As someone who reads these news sites closely every day, there’s no doubt that in a race between Mr. Trump against a broomstick, these folks would hand the broomstick a landslide. I can give countless examples of this, but hey, just take any article and have a look for yourself.

For any reporter to have their personal opinion show in a news article is a gross breach of ethics. To have it as a point of pride just means that we have to search elsewhere for real news. The former is our problem, the latter is their problem.

This is what’s behind the latest media salvo against Team Trump, the target this time being Jared Kushner, the president’s son-in-law and top aide.

The media, the Washington Post in particular, has been slyly crafting a case since last November to delegitimize Mr. Trump. First came the libel against Steve Bannon (Remember that? He was supposedly the leading light of the alt-right anti-Semitic wing of the GOP), followed by Michael Flynn, the short-lived national security advisor, then Sebastian Gorka. In between were bizarre arguments over the president’s claim regarding inauguration attendance, insertions of “falsely” or “without evidence” when quoting Mr. Trump (a first for a presidential quote), and hundreds of small fry falsehoods trying to depict Mr. Trump in a negative light.

Now it’s Mr. Kushner’s turn. The pile-on began late last week, when the Washington Post darkly reported that he was the “subject of an FBI inquiry” related to the “Russian election scandal.”

Left unreported — wait, there it is at the end of the Post’s report itself: Mr. Kushner is just in possession of information and is not a suspect. Meaning that the FBI just wants to talk to him regarding an existing investigation, not under oath.

The ambush continued the next day. Mr. Kushner, “revealed” the Post, met in December with the Russian ambassador, which is in itself a crime. Second, he proposed setting up a secret, back channel directly from Mr. Trump’s transition team to the Kremlin, which is treason. And third, he suggested using encrypted methods of talking to each other.

Another crime of high treason.

Except that it’s not. There’s actually nothing wrong with meeting the Russian ambassador, a short portly bureaucrat who is as mystified as anyone why he has suddenly been thrust into the biggest story in a decade.

As a president-elect, Mr. Trump was entitled to begin working on his foreign policy so as not to be caught flatfooted on his first day. Setting up a “secret back channel” sounds ominous but is completely normal for administrations (remember Mr. Obama’s “secret back channel” to Iran? It started in 2009 and ended in the 2015 nuclear deal. Iran is an enemy that consistently threatens the West, as opposed to Russia.)

The same goes for Mr. Comey. The FBI chief was ousted because presidents get to do that. For Democrats, along with their communications branch, otherwise known as the media, only Democratic presidents are entitled to have their own team in place.

Make no mistake, the target is Mr. Trump. And not because of anything the president is or represents, but just for the fact that he is a Republican, which in the media’s eyes casts him as the enemy.

Now remind me again why the media got so upset when Mr. Trump referred to them as the enemy?

But I understand the Democrats. It’s politics. This ain’t beanbag. I get this.