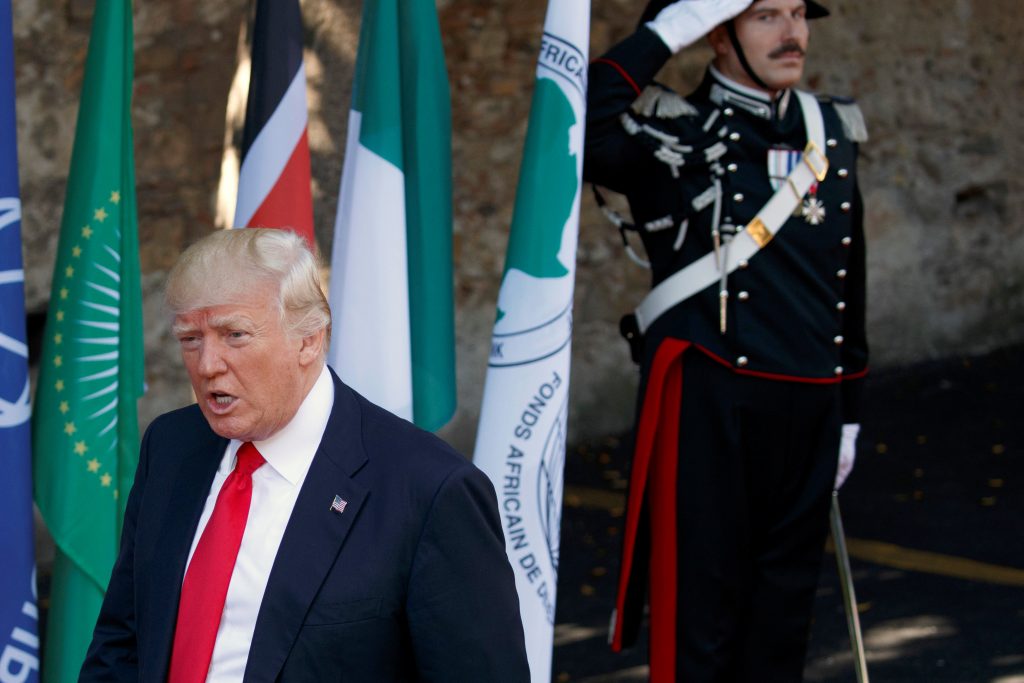 The comments at an election rally Sunday in Bavaria, where Merkel stressed that “we Europeans must really take our destiny into our own hands,” were widely seen as acknowledgement from Europe’s most powerful leader of the changing dynamic of trans-Atlantic ties.

Her foreign minister, a political rival, upped the rhetoric Monday by declaring that with Trump’s policies, “the West has become smaller.”

Merkel’s remarks came after a Group of Seven summit at which the Europeans couldn’t reach an agreement with Trump on climate change.

“The times in which we can fully count on others are somewhat over, as I have experienced in the past few days,” she said. “And so all I can say is that we Europeans must really take our destiny into our own hands.”

Merkel also emphasized the continued need for friendly relations with the U.S. and others. Her spokesman Steffen Seibert, said Monday the chancellor is “a convinced trans-Atlanticist.”

U.S.-German relations “are a strong pillar of our foreign and security policy, and Germany will continue working to strengthen these relations,” Seibert said. “Precisely because they are so important, it’s right to name differences honestly.”

Where Europe’s relationship with the U.S. during the Cold War and in its immediate aftermath had a strong emotional component, Merkel’s comments suggest she now sees them as more “pragmatic and transactional,” said Sylke Tempel, an expert with the German Council on Foreign Relations.

“She feels there is a turning point – trans-Atlantic relations won’t be the relations we’ve seen over the last decades,” Tempel said. “Trump accelerates it, but it was to be expected.”

She also noted that Merkel is seeking a fourth term as chancellor in September, and does not want to be seen as being too close to an American president who is widely disliked in Europe.

During a speech Monday in Berlin, Merkel did not specifically mention Trump but quoted a 1963 speech by former President John F. Kennedy in Frankfurt, where he told the audience “those who look only to the past or the present are certain to miss the future.”

“With change comes insecurity, skepticism … and, not infrequently, the glorification of the supposedly good old days,” Merkel said. “Particularly in view of the complexity of global contexts, a wish for simple answers spreads. But anyone who puts on national blinkers and has no view of the world around him will ultimately get lost.”

Her main challenger in September, the Social Democrats’ candidate Martin Schulz, doubled down on Merkel’s Sunday comments, saying the summits made it clear that Trump was a president “who wants to humiliate others, who presents himself like an authoritarian ruler.”

“Europe is the answer, and stronger cooperation between the European countries at all levels is the answer to Donald Trump,” Schulz said on ARD public television. “And above all else, we must not submit to Trump’s arms-race logic.”

And Vice Chancellor and Foreign Minister Sigmar Gabriel, also a Social Democrat, said Monday that if the Trump administration “finds pushing through national interests more important than an international order… then I say that the West has become smaller – it has at least become weaker.”

He added, however, that he hopes “we can win back the United States one day, because there are also large parts of American society that we must not forget.”

Following the G-7 meeting in Sicily on Saturday, Merkel was sharply critical of Trump’s decision not to join the other countries in reiterating support for the 2015 Paris Agreement that aims to slow global warming, calling the G-7 climate talks “very unsatisfactory.”

“Here is a situation where it’s six, seven if you include the EU, against one,” she said. “That means there are so far no signs whether the United States of America will remain in the Paris agreement or not.”

Trump did not hold a news conference after the summit but later tweeted that he would make his “final decision” on the Paris accord this week.

Germany has also bristled at criticism from Trump over NATO defense spending and the country’s large trade surplus.

Still, it would be unlike Merkel just to give up on dealing with Trump, Tempel said.

“I’ve never seen her in 12 years give up on anything,” she said. “She’s someone who is very sober about the guys with the big agendas and big egos, be it (Russian President Vladimir) Putin, be it (Turkish President Recep Tayyip) Erdogan, be it Trump.”