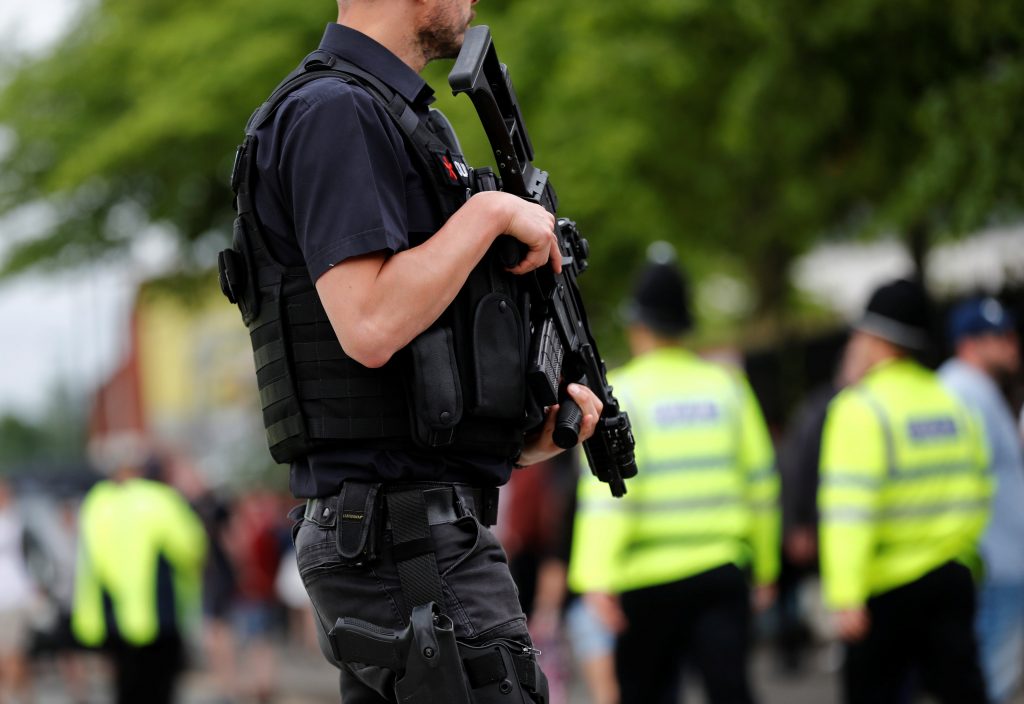 British police made another arrest and stormed another house Sunday as they hunted for suspects in the Manchester bombing, while a government minister said members of attacker Salman Abedi’s network may still be at large.

Greater Manchester Police said a 25-year-old man was arrested in the city on suspicion of terrorist offenses. Eleven other men between the ages of 18 and 44 also are in custody.

Armed officers and police dogs took part in the raid on a house in Moss Side, a working-class area of south Manchester. Most of the searches and arrests since Monday night’s bombing have been in multi-ethnic south Manchester, where Abedi — the son of Libyan parents — was born and raised.

Police say that 1,000 people are working on the investigation, trying to track down Abedi’s accomplices and piece together his movements in the days before he detonated a bomb at a concert. The explosion killed 22 people — including seven children under 18 — and injured more than 100.

Abedi died in the blast. Investigators say they have dismantled a large part of his network, but expect to make more arrests.

“The operation is still at full tilt,” Home Secretary Amber Rudd said, adding that some suspects could remain at large.

“Until the operation is complete, we can’t be entirely sure that it is closed,” she said.

British police now have 12 suspects in custody — including Abedi’s elder brother Ismail — and have searched properties across the northwest England city. Another brother and Abedi’s father have been detained in Libya.

Police have released surveillance-camera images of Abedi on the night of the attack that show him dressed in sneakers, jeans, a dark jacket and a baseball cap. The straps of a backpack are visible on his shoulders.

Authorities are appealing for more information about his final days. They say he returned to Britain from Libya on May 18, and likely completed assembling his bomb at a rented apartment in central Manchester.

There were prayers for the victims at church services across Manchester on Sunday. In Rome, Pope Francis led thousands of people in St. Peter’s Square in prayer, saying he was “close to the relatives and all those who are weeping for the dead.”

On Saturday, Britain lowered its official terrorism threat level from “critical” to “severe” after police said they had dismantled a large part of Abedi’s network.

But security remained high at major events across Britain on Sunday, including the Great Manchester Run road race, where police armed with submachine guns protected thousands of participants and spectators.

A Manchester musician was among the runners and said the tragedy had brought people together.

“I’ve always had a pride in this city, ever since I was born,” he said. “They picked the wrong people to mess with this time.”

The government is facing criticism after acknowledging that Abedi was on security services’ radar, but wasn’t a major focus of scrutiny.

Rudd said Sunday that intelligence agencies were monitoring 3,000 suspected extremists and had a wider pool of 20,000 people of interest.

“I would not rush to conclusions … that they have somehow missed something,” Rudd said.

The family of one victim, 18-year-old Georgina Callander, said her life had been cut short by “evil, evil men prepared to ruin lives and destroy families.”

“I wish I could say that Georgina is one of the last to die in this way, but unless our government opens its eyes we know we are only another in a long line of parents on a list that continues to grow,” the family said in a statement released through Greater Manchester Police.