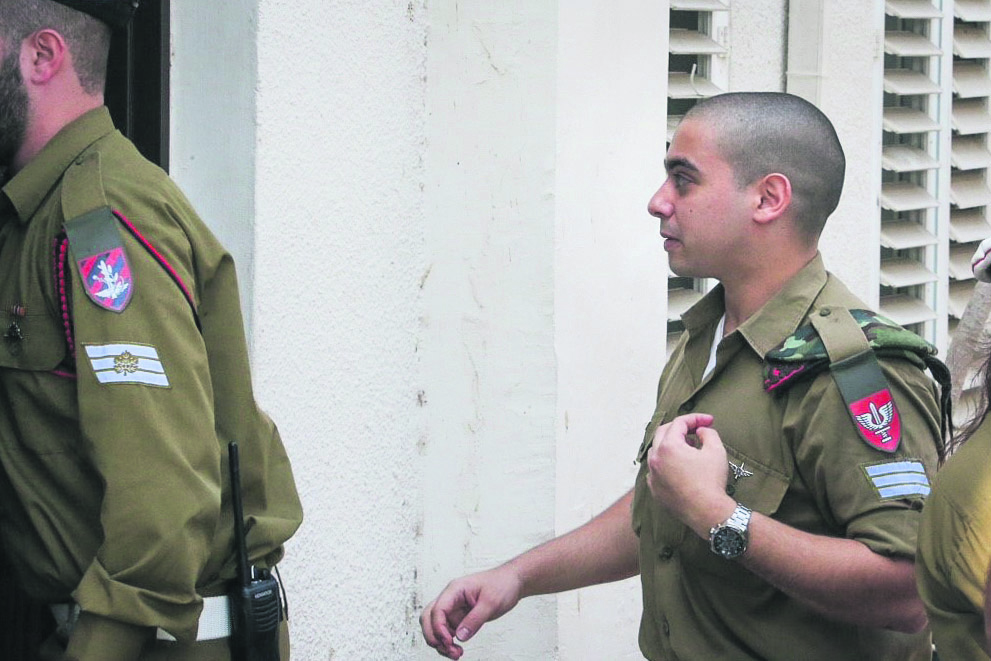 A military court judge on Sunday questioned why IDF soldier Elor Azaria, who was found guilty of manslaughter after shooting dead a neutralized terrorist, was appealing his conviction and 18-month sentence, calling on both Azaria and the military prosecution to withdraw their appeals, Yediot Acharonot reports.

Azaria’s lawyer, Yoram Sheftel, was quick to accept the proposal and offered a two-week mediation process, but prosecutor Lt. Col. (res.) Nadav Weisman refused and insisted that the court rule on the case.

Despite this, the judges called on the two sides to consider the request and asked the prosecution to raise the issue with the Military Advocate General. The court gave the sides a week to reach a decision.

The military court held what was supposed to be the final hearing in Azaria’s appeal, during which the judges posed hard questions to Azaria’s lawyer.

“None of the soldiers, officers or armed civilians at the scene — despite having felt danger — drew their weapon and shot the terrorist,” Judge Tzvi Segal told Sheftel.

Judge Brig. Gen. (res.) Avi Peled followed up, telling Sheftel, “What I’m not hearing from you is why the appellant, unlike everyone else at the scene, felt danger and opened fire.”

Sheftel claimed that “in the Jilani case only one police officer opened fire as well,” referring to a 2010 incident in which a Border Policeman shot dead Ziad Jilani, a Palestinian terrorist who rammed his car into Border Policemen in eastern Yerushalayim. The policeman shot Jilani at close range while he was lying on the ground. Some six months later, the Police Investigation Unit decided to close the investigation citing lack of evidence.

This wasn’t the first time Sheftel brought up the Jilani case. In a previous hearing, Segal reprimanded Sheftel, telling him that “in the Jilani case, the soldier acted according to the rules of engagement.”

Segal also inquired whether “there is an explanation as to why Azaria handed his helmet over to his friend before shooting. After all, he was afraid [the terrorist carried] a bomb.”
“I don’t remember. He wasn’t asked about that,” Sheftel responded, adding, “Is anyone examining such nuances? Why is Azaria being picked on with nuances?”

To this, Segal responded, “You claim in your appeal that Azaria made a professional error and nothing more. I can’t find a single sentence in his testimony [to indicate that] … Azaria even explained in his testimony that everyone else was negligent, and he was right.”

Sheftel later addressed the issue of Azaria’s helmet, saying, “When the shooting is not planned in advance, [soldiers] remove their helmet to shoot.”

Judge Peled, who once served as the commander of the Golani Brigade, rejected Sheftel’s response, saying, “This isn’t a professional answer. You don’t remove the helmet for close range shooting.”