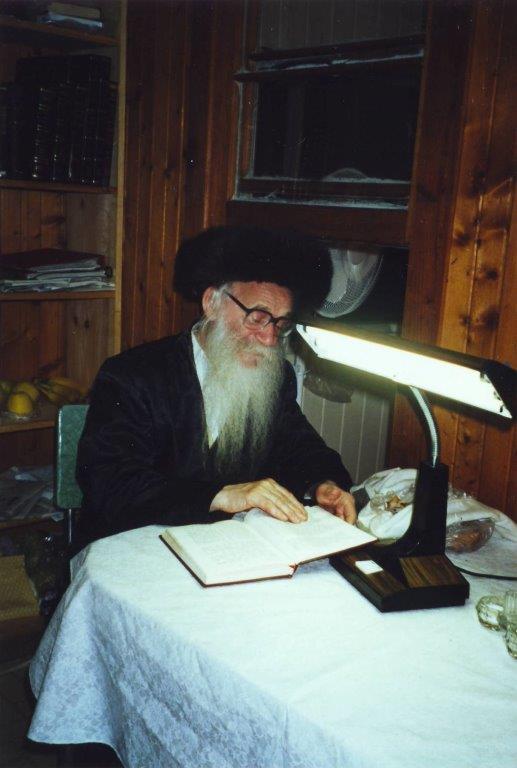 On 2 Sivan, Klal Yisrael lost one of its last remaining links to Gedolim of pre-war Europe, with the passing of Harav Ephraim Fishel Hershkowitz, zt”l. “Reb Fishel,” as he was known to all, served for decades as the dayan of the Klausenburg kehillah of Williamsburg, and was one of the foremost poskim of the generation. He was 94 years old.

From his small and simple apartment on Ross Street, he trained many of the leading Rabbanim of our times and dealt with some of the most difficult halachic issues of the day.

A master of both revealed and hidden areas of Torah, Rav Fishel’s psak was sought for over half a century on the widest range of halachic issues from day to day kashrus mishaps in the kitchen to weighty she’eilos facing individuals and the tzibbur alike.

Rav Fishel’s passing marks the dusk of an era in many respects. He was one of the last remaining leaders in Klal Yisrael to have received his chinuch in the world that was destroyed by the Holocaust. Moreover, the ease with which he could answer a difficult she’eilah or quote gemaros and meforshim verbatim astounded those who came in contact with him. His fiery tefillos and deeply rooted yiras Shamayim made it clear to all that Rav Fishel was someone whose ideals were molded by the standards of a different era.

Perhaps more than any of these, the utter simplicity with which Rav Fishel carried himself, despite his phenomenal knowledge, lofty spiritual level, and position in Klal Yisrael was something that belonged distinctly to generations past; to those to whom expertise in Shas and poskim, and a burning connection to Chassidus and all it demands, were not to be considered extraordinary.

Rav Fishel was born in 1923 in the city of Munkatch, part of present- day Ukraine. He imbibed the spirit of Torah, emunah and Chassidus that defined the renowned city.

In his youth, he merited to see such giants as the famed Minchas Elazar, Harav Chaim Elazar Shapira, zy”a, whose yahrtzeit he now shares, and the Chakal Yitzchak of Spinka, Harav Yitzchak Weiss, Hy”d.

The Hershkowitz family had been Chassidim of the courts of Zitachov and Spinka for generations. Rav Fishel’s grandfather, Harav Avrohom, who served as a dayan in Munkatch, had been a Chassid of the Imrei Yosef and his father Rav Shlomo was considered an especially prominent member of the city’s large Spinka kloiz.

Young Fishel’le would travel many times to the court of the Chakal Yitzckok, whose fiery avodah left a life-long impression, and of whom he considered himself a loyal Chassid until his last days.

At an early age he distinguished himself both by his brilliance and diligent study. While others in his class were still learning Chumash, his melamed swiftly moved him along to mishnayos and gemara. By age 11 he knew Maseches Chullin with all the Tosafos and before his bar mitzvah had been tested on Yoreh De’ah, although Rav Fishel himself would point out that this only covered the Shulchan Aruch and Rema with the commentary of the Shach and Taz, not the Pri Megadim.

As he grew older, he went on to join a group of Spinka bachurim who learned together in the city’s kloiz. Rav Fishel once expressed wonder at the idea of a bachur sleeping on Shabbos afternoon, saying that he and his chaverim regularly learned for 10 hours each Shabbos, a small picture of the spirit of hasmadah that permeated the beis medrash.

During the war years he was deported to Auschwitz together with his parents. When Rav Fishel was separated from his father and mother, Mrs. Chaya Hershkowitz, Hy”d, at the selektzia they sensed that they would not see each other again. He would recall that his father parted from him with the passuk, “haben yakir li Ephraim…” Rav Fishel was spared, but remained in the camp for about half a year before being liberated by the Soviet army.

Following liberation, despite his youth, Rav Fishel served on several batei din that dealt with the thousands of heartbreaking she’eilos of agunos in the wake of the war. Sadly, he would be called upon to use this expertise decades later in the days following the World Trade Center attacks.

Shortly after the war, Rav Fishel married, ybl”c, Chaya Rochlitz, who has dedicated her life with great loyalty to serving this unique Gadol b’Yisrael. He served for a few years as Rav in the Austrian town Halein for a kehillah of transient survivors, and continued to be known as the Holeiner Rav for the rest of his life.

In the late 1940’s the Hershkowitz’s moved to America, settling in Williamsburg. There, Rav Fishel joined a small kollel that had been recently established by the Klausenburger Rebbe, Harav Yekusiel Yehudah Halberstam zy”a, with whom he forged a deep bond.

The kollel was a unique gathering place for young talmidei chachamim, with standards of learning far above what was de rigueur in the American Jewish community at the time. After a short while he assumed leadership of the Klausenburger kehillah of Williamsburg, a position he remained in for the rest of his life.

Rav Fishel’s encyclopedic knowledge of all areas of Torah was legendary. Despite the responsibilities of his position and his growing family, he spent untold hours completely absorbed in his studies. He was a living otzar hasefarim with astounding knowledge of the most obscure sources in Shas, commentaries and teshuvah sefarim through the generations, Chassidus, and Kabbalah.