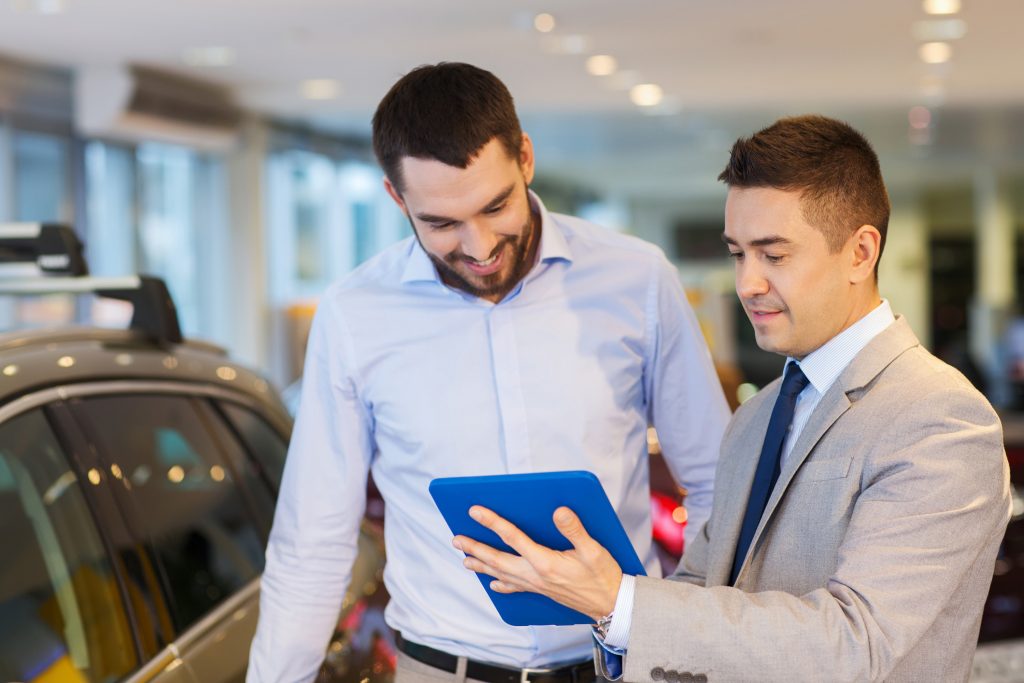 As brick-and-mortar stores around the country close up and more retail sales shift to the internet, the auto industry seems stuck in the past, plodding along in much the same way that it has for decades.

If you want to buy a new vehicle, you still have to schlep to a dealer, negotiate a price and sign a stack of documents before you drive away. With the notable exception of upstart Tesla Motors, which offers a completely online process, shoppers can start the buying process online, but ultimately they have to visit a dealership to close the purchase.

One reason is that manufacturers who have franchised dealers — everyone except Tesla — cannot compete with their dealers by selling directly to consumers either online or through company-owned stores, like Tesla or companies such as Apple. That is the law in all 50 states, so buying from a dealership is the only avenue.

Though some consumers clamor for an entirely online experience, the traditional trek to a dealership is still the easiest route. A substantial portion of car buyers rely heavily on the services dealers provide, such as accepting trade-ins, arranging financing and having a selection of vehicles in stock they can see and test drive.

“Buying online is the path of least resistance” for a new-vehicle shopper who is not trading in a car and has good credit, so they are a cinch to get approved for a loan, said Mathew Desmond, head of the North American automotive consulting firm Capgemini.

But most customers will have a trade-in or need to discuss financing, which isn’t well-integrated into manufacturer and dealer sites, Desmond said in a telephone interview.

“Dealers use technology heavily, and they’re quite savvy, but when it comes to the challenge of integrating finance and insurance platforms for credit approval, for trade-ins and appraisals, and being sure that you have the right value for the vehicle, the integration of all those processes so that they work seamlessly for a great customer experience is a big challenge,” he said.

“We’re getting to the point where credit applications can be submitted online to a dealership, obviously a car can be picked out, the price can be talked about and somewhat negotiated either on the telephone, through email or a website. All those functions are evolving,” Scarpelli said.

“We’re going with what the customer likes and dislikes. There’s a lot of people who say, ‘I’d love to be able to buy the car online, but I still want to negotiate’ or ‘I want to touch and feel that car, and I want to drive it.’ Some of those functions can never be replicated online,” he said, adding that many lenders still require borrowers to sign loan agreements in person at a dealership.

Tesla allows shoppers to build a vehicle with features they choose and place an order online and pick it up at a delivery center or have it delivered. Buyers also can purchase a vehicle out of inventory online or through a company-owned store. A brand called Lynk & Co that intends to launch in the U.S. in 2019 plans a similar approach of selling directly to consumers online and through company-owned stores.

In comparison, Desmond said General Motors’ Shop-Click-Drive program is an example of where other manufacturers are with online purchases. Consumers can shop dealer inventories online, pick a car, and check prices and financing options online, but they have to go to a dealer to complete the transaction and get an actual trade-in value.

GM launched Shop-Click-Drive in late 2013. A spokesman said about 72 percent of GM’s 4,300 dealers participate and the “new- and used-vehicle leads generated by the program approached the half-million mark in 2016.” He said he couldn’t be more specific.

During that time, though, GM sold more than 9 million vehicles in the U.S., so it accounts for only a small portion of its total sales, indicating that a vast majority of consumers still do all of their vehicle purchases the old-fashioned way — by going straight to a dealership.

But with consumers making so many other retail purchases digitally, Desmond said that will prod the auto industry to change its approach in the near future so that most or all of a vehicle purchase can be completed online.

He believes that will happen through a partnership of manufacturers working with dealers — not the direct sales approach used by Tesla. Tesla skirts the laws against competing with franchise dealers because it has none (the company owns all Tesla stores). Desmond said other manufacturers don’t want to start wars with their dealers by trying to sell directly to consumers, but he says the current system needs to become more digitally oriented and seamless when manufacturers hand off customers to dealers.

“I don’t believe there needs to be a replacement for dealers, but there could be more choices in addition to dealers or different types of experiences with dealers,” he said.

“There seems to be a symbiotic relationship where the manufacturer produces the product and the franchised dealer network sells and services it. What it revolves around is customer choice, and the industry needs to provide more choice to customers to meet or exceed their expectations.”

University of Michigan law professor Daniel Crane argues that the franchise laws that require manufacturers to sell through dealers have helped keep the auto industry in a 20th Century retail model that is inefficient and reduces choices for consumers.

“With changing technology both in terms of the cars and in which customers are used to buying more products online, now is a moment when the old business model isn’t making as much sense as it once did,” Crane said of the franchise dealer system that has been in place more than 100 years.

Auto companies should be allowed to choose their own way of selling cars, whether that is online, through stores they own or through dealers, like other businesses, Crane said.

Crane said Tesla may have to use franchised dealers to expand its sales and service network — something that CEO Elon Musk has said could happen — and adopt a hybrid distribution model like Apple, which sells products through its own stores as well as other retailers. Conversely, he added, car companies should be free to try other ways to sell to consumers other than through dealers.

“There are lots of different ways of doing distribution, and every seller has to figure the best way to get its product to market. Having more choice and flexibility is going to incentivize more companies to experiment to find the right pitch for their products,” Crane said. “What you ordinarily want to let happen is a competitive process in the market to sort out what is the best distribution method.”

Pros and Cons of the Franchise Dealer Model

Automakers have sold cars through franchised dealers for more than 100 years. Dealers say this system benefits consumers, but critics contend it is inefficient and adds cost. Here are some key pros and cons cited by advocates and critics:

Service: Consumers can get their vehicle serviced at the same place they bought it. This can foster a sense of community, trust.

Advocacy: With warranty issues, dealerships often advocate on behalf of consumers with the manufacturer.

Limited choice: Some consumers would prefer to buy directly from the manufacturer and avoid dealers.

Higher costs: Dealerships raise costs by adding another layer to the distribution system.