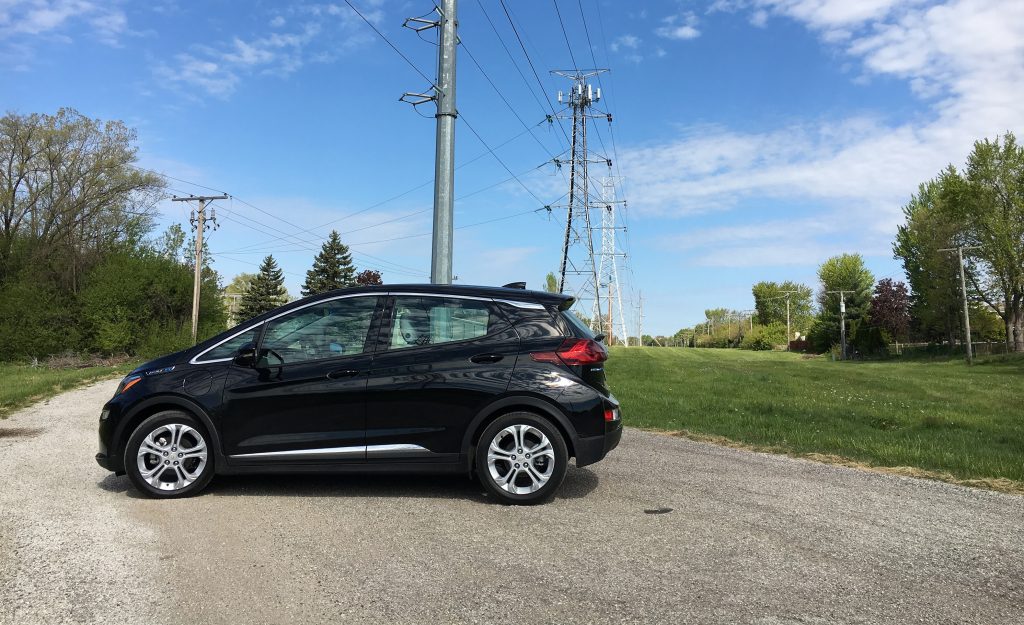 People called it cool, cute, quick. The most talked-about feature was the 10.2-inch touch screen, the most divisive the plastic black-on-white dashboard design.

But the comments that best summed up reactions to the evolutionary Chevy Bolt EV came from very different sources: an 11-year-old boy and a 75-year-old retiree.

“Global warming won’t be such an issue if people drive these,” the boy said.

“This is the car of the future right now,” his grandfather said, separately. Then he floored it.

In this everyone agreed: The Bolt is fun to drive. It is also the most significant car on the market right now.

There are no gear shifts to interrupt its linear acceleration, enabling it to hit 60 mph in 6.5 smooth seconds, or fast enough for a modest stomach drop.

The Bolt EV is not a sports car; the 17-inch wheels are too thin and the suspension and steering too soft. It’s not a Tesla, either, because it costs nearly a third less. With the $7,500 federal tax credit for the new purchase of all-electric vehicles, for now, the Bolt EV starts $5 under $30,000.

It lasts long enough to overcome range anxiety, is much larger on the inside than its small footprint, and employs the most advanced technology available at a price less than the average car. With the Bolt, EVs are no longer limited-use tree-hugging compromises. Like Tesla, it is simply a good car. But affordable.

But let’s not skip over the fun part. The 60 kWh lithium-ion battery pack provides 266 pound-feet of torque, in the same range as many affordable sports cars. It hits 60 mph in 6.5 seconds, good enough to make passengers giggle.

Even when Tesla later this year rolls out the Model 3, on which most consumers are expected to spend about $50,000, the Bolt EV will stand on its own as an overall good car, regardless of power source — it’s versatile like a hatch, nimble as a compact, roomy as a small crossover.

The Bolt EV looks and acts like a normal car except for one game-changing feature: it can go 238 miles between charges. That’s enough for most round-trip commutes, even enough for most modest road trips.

Level 3 DC fast-charging compatibility is available for $750, giving road trippers 90 miles of range for every 30 minutes of charge.

Closer to home, most EV owners should opt to install a Level 2 charging station in their garage or building, which delivers 25 miles of range per hour of charge. Chevrolet offers one for $699, and will recommend area electricians for installation.

The kids enjoyed “filling up” the car by plugging in the Bolt EV in our standard garage 120-volt outlet (Level 1), which gets only 4 miles of range per hour of charge. The Bolt, by the way, draws as much current as a hair dryer blowing hot air, says Chevy rep Fred Ligouri.

Here’s the thing: It didn’t matter. We didn’t plug the car in for the first two nights and after driving 45 miles starting from a 190-mile starting point, the Bolt EV still had 160 miles of range remaining.

What dark sorcery is this? Bad math? Was the gauge broken? Was there a glitch in the matrix?

No. We were driving in “L” mode, and optimizing one-pedal driving. One-pedal driving enables the regenerative braking system. Shifting the “gear” selector, which Chevy calls “electronic precision shifter” since there are no gears, from “D” to “L” means that it’ll no longer coast like a normal car. Let off the accelerator in “L” and the car shrugs into a heavy sort of slow down, like other plug-in cars with this feature. The car will come to a stop on its own. So instead of coasting and burning up that kinetic energy with brakes, the regen system captures the energy and delivers it to the batteries.

There is a brake pedal, of course, to be used while playing your cassette tape, or more seriously, in emergency situations. There is also a brake paddle on the underside of the steering wheel, same as in the Chevy Volt and Cadillac ELR, GM’s plug-in hybrids. The paddle brake returns energy in the same manner as “L” mode, though the effect is less pronounced in speeds over 20 mph. For any hard braking, we used the foot brake. But coasting into most stops, even slowing down for a turn in “D” mode, we used the paddle. The only time we didn’t use the paddle brake was at highway speeds, though it’s ideal in stop-and-go traffic. Chevy estimates that using the regen system, either in “L” mode or with the paddle brake, recaptures 5 to 7 percent of the energy used in stop-and-go commuting.

It took us about two minutes to understand how to use it, and a few drives to get the timing right without coming up short at a stoplight in “L” mode.

The next best feature in the Bolt EV is the clean display and spartan dash. The cabin also has great headroom and visibility, unlike the cramped feeling in most subcompact crossovers. The center console ends at the cup holders, then there is a gap — for handbags, electronics, whatever — before the center stack.

The centerpiece of the center stack is the 10.2-inch touchscreen. The layout is logical, clear and easy to use without a manual. The highlighted energy flow button is a nice touch. Below the screen are large audio knobs and climate control buttons.

The battery design, which consists of five modules placed in the floor laterally between the front and rear seats, keeps the cabin open. But the fourth and fifth modules are stacked on top of one another under the rear seats, so when the rear seats are folded flat, there is a 6-inch elevation in the middle of the cargo floor. We fit the usual weekend family stuff without a problem, however.

During my week with the Bolt, it grew on me. My opinions usually go in the opposite direction with cars. Even without the ecological statement it makes, the Bolt is a good car. It’s fun to drive, versatile and user-friendly. It must be experienced, however, to understand how well it balances all of its advanced technology in such seamless operation.

With all automakers expanding their electrified portfolios, and the market overcoming range anxiety, the Bolt EV is the most significant car on the market, and it just may be the deal of this century.