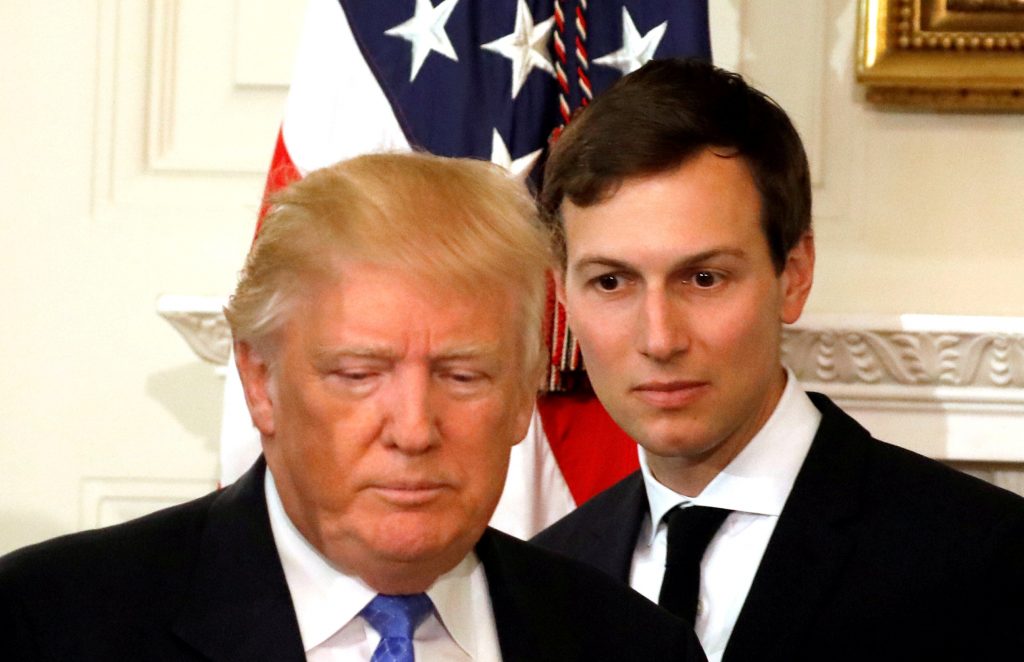 President Donald Trump’s son-in-law and close adviser, Jared Kushner, had at least three previously undisclosed contacts with the Russian ambassador to the United States during and after the 2016 presidential campaign, seven current and former U.S. officials told Reuters.

Those contacts included two phone calls between April and November last year, two of the sources said. By early this year, Kushner had become a focus of the FBI investigation into whether there was any collusion between the Trump campaign and the Kremlin, said two other sources – one current and one former law enforcement official.

While the FBI is investigating Kushner’s contacts with Russia, he is not currently a target of that investigation, the current law enforcement official said.

The new information about the two calls as well as other details uncovered by Reuters shed light on when and why Kushner first attracted FBI attention and show that his contacts with Russian envoy Sergei Kislyak were more extensive than the White House has acknowledged.

NBC News reported on Thursday that Kushner was under scrutiny by the FBI, in the first sign that the investigation, which began last July, has reached the president’s inner circle.

Kushner’s attorney, Jamie Gorelick, said Kushner did not remember any calls with Kislyak between April and November.

“Mr. Kushner participated in thousands of calls in this time period. He has no recollection of the calls as described. We have asked [Reuters] for the dates of such alleged calls so we may look into it and respond, but we have not received such information,” she said.

Before the election, Kislyak’s undisclosed discussions with Kushner and Flynn focused on fighting terrorism and improving U.S.-Russian economic relations, six of the sources said. Former President Barack Obama imposed sanctions on Russia after it seized Crimea and started supporting separatists in eastern Ukraine in 2014.

After the Nov. 8 election, Kushner and Flynn also discussed with Kislyak the idea of creating a back channel between Trump and Russian President Vladimir Putin that could have bypassed diplomats and intelligence agencies, two of the sources said. Reuters was unable to determine how those discussions were conducted or exactly when they took place.

Separately, there were at least 18 undisclosed calls and emails between Trump associates and Kremlin-linked people in the seven months before the Nov. 8 presidential election, including six calls with Kislyak, sources told Reuters earlier this month. Two people familiar with those 18 contacts said Flynn and Kushner were among the Trump associates who spoke to the ambassador by telephone. Reuters previously reported only Flynn’s involvement in those discussions.

Six of the sources said there were multiple contacts between Kushner and Kislyak but declined to give details beyond the two phone calls between April and November and the post-election conversation about setting up a back channel. It is also not clear whether Kushner engaged with Kislyak on his own or with other Trump aides.

FBI scrutiny of Kushner began when intelligence reports of Flynn’s contacts with Russians included mentions of U.S. citizens, whose names were redacted because of U.S. privacy laws. This prompted investigators to ask U.S. intelligence agencies to reveal the names of the Americans, the current U.S. law enforcement official said.

Kushner’s was one of the names that was revealed, the official said, prompting a closer look at the president’s son-in-law’s dealings with Kislyak and other Russians.

FBI investigators are examining whether the Russians suggested to Kushner or other Trump aides that relaxing economic sanctions would allow Russian banks to offer financing to people with ties to Trump, said the current U.S. law enforcement official.

The head of Russian state-owned Vnesheconombank, Sergei Nikolaevich Gorkov, a trained intelligence officer whom Putin appointed, met Kushner at Trump Tower in December. The bank is under U.S. sanctions and was implicated in a 2015 espionage case in which one of its New York executives pleaded guilty to spying and was jailed.

The bank said in a statement in March that it had met with Kushner along with other representatives of U.S. banks and businesses as part of preparing a new corporate strategy.

Officials familiar with intelligence on contacts between the Russians and Trump advisers said that so far they have not seen evidence of any wrongdoing or collusion between the Trump camp and the Kremlin. Moreover, they said, nothing found so far indicates that Trump authorized, or was even aware of, the contacts.

There may not have been anything improper about the contacts, the current law enforcement official stressed.

Kushner offered in March to be interviewed by the Senate Intelligence Committee, which is also investigating Russia’s attempts to interfere in last year’s election.

The contacts between Trump campaign associates and Russian officials during the presidential campaign coincided with what U.S. intelligence agencies concluded was a Kremlin effort through computer hacking, fake news and propaganda to boost Trump’s chances of winning the White House and damage his Democratic opponent, Hillary Clinton.