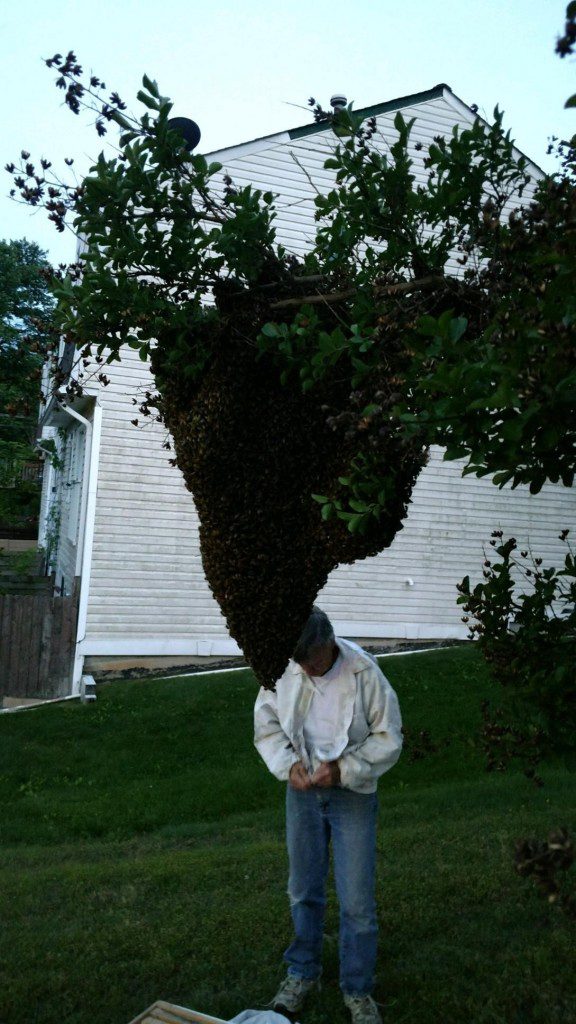 Wearing only a T-shirt, blue jeans and sneakers – and no gloves – Nathan Thompson reached up and gingerly pulled down the branch of a crepe myrtle tree as his father leaned in and clipped a branch holding a swarm of about 40,000 bees.

The pair of beekeepers said the swarm had set up shop in a grassy area at a townhouse community along Thomas Jefferson Place in Fredericksburg, Virginia. A resident called law enforcement to report the bees, but an animal control officer realized the third-generation beekeeping family might be of more assistance.

The swarm was about the size of a small child, measuring 3 feet tall and 2½ feet wide. It weighed about 40 pounds.

Even for them, it was one of the biggest swarms of honey bees the Thompsons had seen in their decades raising and caring for bees. It took hours to make sure all of the bees relocated to beehive boxes before they were taken to Thompson’s house.

“We had a moment of reverence, admiration……,’ ” Nathan Thompson said Wednesday as he recalled the incident. “We definitely thought, ‘That’s a big one.’ ”

Although Thompson and his dad didn’t count the bees one by one, he said he is fairly confident that given the size of the swarm, it likely contained about 40,000 of them.

The bee rescue unfolded about 6:40 p.m. May 17, when Anthony McCall, an animal-control officer with the Stafford County Sheriff’s Office, got a call from a resident for help getting rid of a swarm of bees.

McCall is a “self-admitted ‘chicken’ when it comes to bees,” his office said in a statement. But he remembered chatting with Thompson, who used to work as a deputy for the sheriff’s office, and recalled that he was a beekeeper on the side. Thompson is now interim chief of the nearby Aquia Harbour Police Department and has been in law enforcement for 13 years.

McCall called Thompson, whose grandfather also was a beekeeper, and asked whether he could help. Thompson, 33, and his 70-year-old father loaded equipment in a truck and drove to the bee swarm.

With a light veil over his face, Thompson pulled down the branch as his dad cut the branch and the swarm fell into the box below. The bulk of the bees went into the beehive boxes below, but some landed on the surrounding sheet.

“My face was right up in the whole big ball of bees,” Nathan Thompson said, recalling the story Wednesday. “And I wasn’t worried at all.”

The key around honey bees, he said, is not to move too fast.

“Everything with bees is about taking your time,” he said. “There’s no rushing. They don’t like quick movement. You have to mellow out and really focus.”

It is not clear how the swarm got so large or where it came from before settling in the tree. Thompson said one possibility is they came from within a wall of a nearby townhouse that was empty and their swarm got too big, so they found a larger spot in the tree.

“My best guess is something happened to where they were located, and they had been there for years, and they ran out of space,” Thompson said.

It took about 45 minutes to remove the swarm from the tree, but Thompson and his father waited around for a few hours to make sure all of the bees found their way to the beehive boxes before leaving, ensuring no bees were left behind.

Thompson said the bees will come in handy. He might loan some to nearby produce farms that grow fruits, vegetables and soybeans to pollinate their crops.

No one was seriously injured, although McCall, the nervous sheriff’s deputy, was stung twice in the rescue. Thompson was stung once on the arm.

Thompson promises to harvest honey over the next year and give it to the resident who made the initial call.