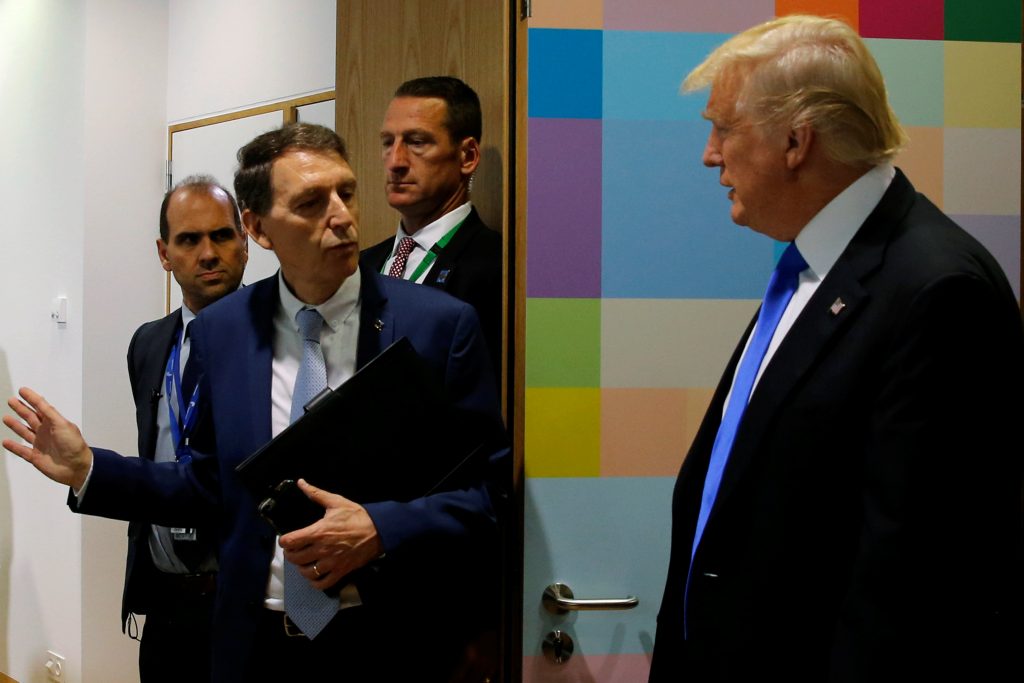 As he continues his first overseas trip as president, President Donald Trump will address a continent Thursday still reeling from his election and anxious about his support.

President Trump appeared to be greeted warmly by the leaders, despite his past comments publicly cheering the United Kingdom’s vote to leave the EU last summer and slamming the alliance during his transition as “a vehicle for Germany.” Trump has taken a less combative tone since taking office, praising the alliance as “wonderful” and saying a strong Europe is very important to him and the United States.

Later in the day, Trump is slated to meet with France’s new president and attend his first meeting of NATO, the decades-long partnership that has become intrinsic to safeguarding the West but has been rattled by the new president’s wavering on honoring its bonds. Trump has mused about pulling out of the pact because he believed other countries were not paying their fair share, and he has so far refused to commit to abiding by Article 5, in which member nations vow to come to each other’s defense.

But the European capitals that have been shaken by Trump’s doubts may soon find a degree of reassurance. Just like his position on the EU, the president has recently shifted gears, praising NATO’s necessity. Secretary of State Rex Tillerson said Wednesday that “of course” the United States supports Article 5, though Trump still wants other nations to meet their obligations to spend 2 percent of their gross domestic product on defense.

“I think you can expect the president to be very tough on them, saying, ‘Look, the U.S. is spending 4 percent. We’re doing a lot,'” Tillerson told reporters on Air Force One. He also said he thought it would be “a very important step” for NATO to join the 68-nation international coalition fighting the Islamic State. The move, which is expected during Thursday’s meeting, is symbolically important, especially since the terror group claimed responsibility Tuesday for a deadly explosion at a concert in Manchester, England.

An anti-terror coordinator may also be named. But most changes will be cosmetic, as NATO allies have no intention of going to war against IS.

“It’s totally out of the question for NATO to engage in any combat operations,” NATO Secretary-General Jens Stoltenberg said Wednesday, on the eve of the meeting.

The 28 member nations, plus soon-to-join Montenegro, will renew an old vow to move toward the 2 percent figure for defense by 2024. Only five members currently meet the target: Britain, Estonia, debt-laden Greece, Poland and the United States, which spends more on defense than all the other allies combined.

Many are skeptical about this arbitrary bottom line that takes no account of effective military spending where it’s needed most. But putting some meat on the pledge, the leaders will agree to prepare action plans by the end of the year, plotting how to reach 2 percent over the next seven years, and show how they will use the money and contribute troops to NATO operations.

European leaders have been particularly unnerved by Trump’s reticence about NATO due to renewed aggression by Russia, which seized Crimea from the Ukraine in 2014 and, intelligence officials believe, interfered in last year’s American elections.

While in Belgium, Trump will unveil a memorial to the terrorist attacks of Sept. 11, 2001, the only time in the alliance’s history that the Article 5 mutual defense pledge has been invoked. He will also speak at NATO’s gleaming new $1.2 billion headquarters.

Trump has also been critical of the European Union, going so far as to label himself “Mr. Brexit” when Great Britain left the EU, while the nationalist movement that helped elect him in the United States has also surged across Europe, shaking the consortium. He will meet Thursday with several EU leaders, including France’s newly elected president — Emmanuel Macron, who has been critical of Trump — over lunch.

In total, Trump will spend about 24 hours in Brussels, a city that he once derided because of Muslim immigration and terror threats.

Brussels is the fourth stop on Trump’s nine-day international trip, the first such trip of his presidency. After rapturous receptions in Saudi Arabia and Israel, and a meeting with Pope Francis in Rome, Trump will likely encounter significant protests in a capital city where he is unpopular.

Those rallies will likely take place outside the heavily guarded security perimeter near the city’s airport and downtown. In the wake of this week’s Manchester bombing, Belgium remains on security Level 3 — meaning that the threat of a terror attack “is possible and likely.” The country has been on that level of alert since suicide-bomb attacks on the Brussels airport and subway killed 32 people last year.

Trump is slated to leave Brussels late Thursday for the final piece of his trip, a two-day stay in Sicily for G-7 meetings.