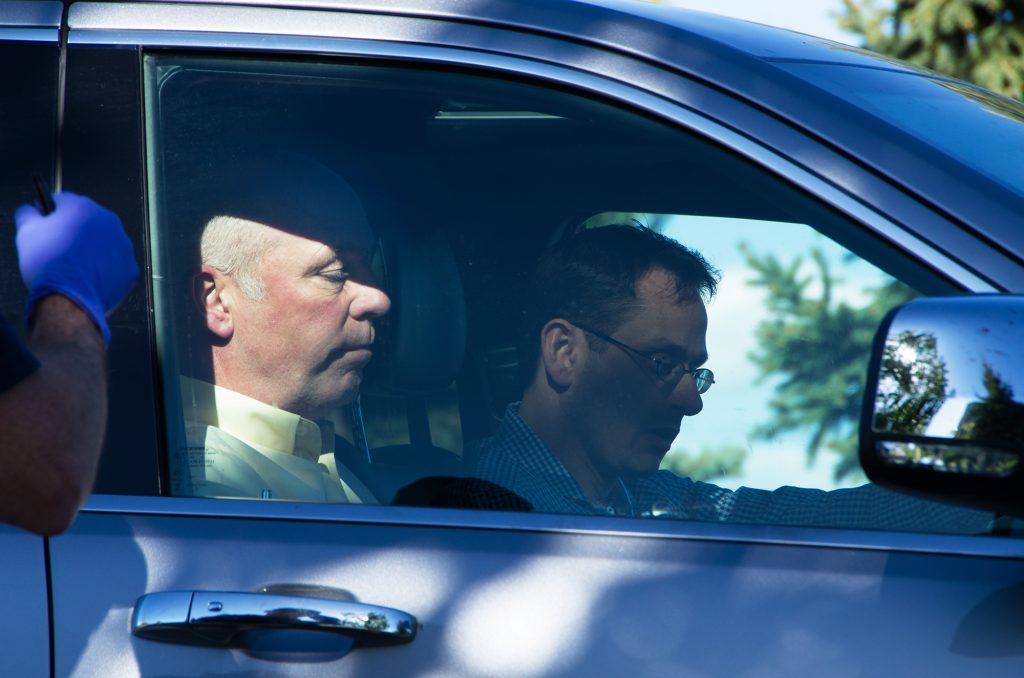 The Republican candidate in the nationally-watched election Thursday for Montana’s sole congressional seat has been charged with misdemeanor assault for allegedly grabbing a reporter by the neck and throwing him to the ground.

Voters are deciding in the special election whether Republican Greg Gianforte or Democrat Rob Quist will fill the U.S. House seat left vacant when Ryan Zinke resigned to join President Donald Trump’s Cabinet as secretary of the Interior Department.

Gianforte, who has tried to align himself with Mr. Trump, defended himself as the criminal charge was announced Wednesday, saying the reporter was being aggressive and grabbed him by the wrist in their exchange at his campaign office.

House Speaker Paul Ryan is calling for Gianforte to apologize.

“That’s wrong and should not happen,” said Ryan.

But Ryan wouldn’t say if Greg Gianforte should be barred from joining the House GOP conference if he wins Thursday’s election. Instead Ryan said, “I’m going to let the people of Montana decide who they want as their representative.”

It’s not clear how the last-minute curveball will affect the race — which is partly seen as a referendum on Trump’s presidency — in part because more than a third of the state’s registered voters cast absentee ballots before polls opened Thursday.

Gallatin County Sheriff Brian Gootkin made the announcement shortly before midnight Wednesday in a written statement, about six hours after the attack on reporter Ben Jacobs of the U.K. Guardian. If convicted, Gianforte would face a maximum $500 fine or six months in jail. The statement added that Jacobs’ injuries did not meet the legal definition of felony assault.

Gianforte was in a private office preparing for an interview with Fox News when Jacobs came in without permission, campaign spokesman Shane Scanlon said.

The Fox News crew watched in astonishment as, after Jacobs pressed him on the GOP health-care bill, called the American Health Care Act, “Gianforte grabbed Jacobs by the neck with both hands and slammed him into the ground behind him,” Fox News reporter Alicia Acuna wrote in an article . She added that Gianforte then began to punch Jacobs.

In an audio recording posted by The Guardian, the reporter asks the congressional candidate about the American Health Care Act, which was just evaluated hours earlier by the Congressional Budget Office.

“We’ll talk to you about that later,” Gianforte says on the recording, referring Jacobs to a spokesman.

When Jacobs says that there won’t be time, Gianforte says “Just—” and there is a crashing sound. Gianforte yells, “The last guy who came here did the same thing,” and a shaken-sounded Jacobs tells the candidate he just body-slammed him.

The Gianforte campaign Wednesday night released a statement blaming the incident on Jacobs. It contends he “aggressively shoved a recorder in Greg’s face and began asking badgering questions” before being asked to leave.

Gianforte asked Jacobs to lower a phone that was being used as an audio recorder, then tried to grab it, the campaign said in a statement. Jacobs then grabbed Gianforte’s wrist and both fell to the ground, Scanlon said.

The 45-second recording does not contain a request from Gianforte that Jacobs lower his phone. Acuna, the Fox News reporter, wrote that “at no point did any of us who witnessed this assault see Jacobs show any form of physical aggression toward Gianforte.”

The sheriff’s office said Gianforte has until June 7 to appear in court on the charge.

Jacobs told ABC on Thursday that he never touched Gianforte. He said of the politician’s account “The only thing that is factually correct … is my name and place of employment.”

Three of Montana’s biggest newspapers pulled their endorsements of Gianforte but did not endorse an opponent.

“We are also sick and tired — of Gianforte’s incessant attacks on the free press,” the Helena Independent Record wrote.

Gianforte, a wealthy businessman, lost a race against Montana’s Democratic governor in November while Trump won the state by 20 points. In the congressional race, Gianforte has been boosted by visits from Vice President Mike Pence and Donald Trump, Jr.

Hours before Wednesday’s assault, the Gianforte campaign sent out a last-minute fundraising appeal to its supporters, saying the outcome “will determine whether we pass Donald Trump’s America First agenda or if the fake news media and the national Democrats will win, keeping Obama’s reckless policies in place.”

Democrats were hoping an upset would send a message to the GOP that Mr. Trump’s souring approval ratings could damage their political fortunes even in deep red states.

The Democratic Congressional Campaign Committee announced that it would launch as many social media ads as possible about the assault, targeting Montana Democrats who might not otherwise vote on Thursday. The Committee called for Gianforte to quit the race.

Scott Sales, the Republican president of Montana’s state senate, unsuccessfully vied against Gianforte for his party’s congressional nomination. On Wednesday evening, he said he could not understand why the scuffle took place.

“There’s always two sides to a story, but this doesn’t look good,” Sales said. “It’s not what you want to see happen on the eve of an election.”