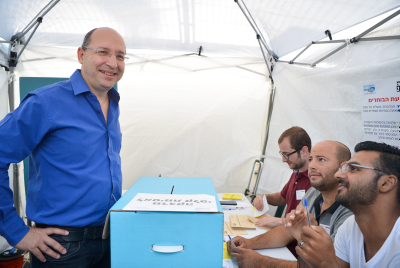 It was complaints of voter fraud by her supporters that led a Tel Aviv court Wednesday night to suspend counting of the votes in the Histadrut election, Shelly Yachimovitch told Israel Radio Thursday. The former MK, who is challenging current chairperson Avi Nissenkorn for leadership of the group, said that there were “testimonies by thousands of people of voter fraud, ballot stuffing and other very creative ways to throw the election.”

“They had many more tricks which we were able to prevent, thanks to the court order,” Yachimovitch said.

The Histadrut election has been marked by outright hostility on the part of both Nissenkorn and Yachimovitch against each other. The latter accuses the current chairperson of failing to truly represent workers, and being more interested in the needs of employers than employees. Nissenkorn, she claims, has failed to take on any of the major issues affecting workers, particularly low wages and the contract worker issue, where companies hire workers on temporary personal contracts instead of employing them for permanent positions that come with benefits. Nissenkorn, for his part, has derided Yachimovitch as an annoying pest who has no practical ideas or program, and will remove the workers’ union from any relevance to the economy.

According to Yachimovitch, Nissenkorn’s supporters have been cheating because she is doing far better in the elections than they expected. Polls varied wildly, with many giving Nissenkorn a decided advantage over Yachimovitch, but exit polls indicated that she was within 5 percent of her opponent. Thus the motivation to cheat, she told Israel Radio. “A truck left Haifa with ballot boxes at midnight Tuesday after the polls closed Tuesday, but got to Tel Aviv only at 10:30 Wednesday morning. The ballot boxes are not under lock and key and are not guarded. They are supposed to be taken to a neutral counting station, but then it turned out the boxes were delivered to Yehud – to Nissenkorn’s campaign headquarters.” Under such circumstances, she said, it was quite understandable that the court would halt vote counting.

Yachimovitch said that at this point there was no point in continuing with the count, and that she would demand new elections. “This is not about my being a sore loser, as Nissenkorn contends, but this campaign has featured a steady and even violent effort to intimidate voters. If I truly lost, I would be happy and proud to stand here and tell you that I lost with honor, but if I did that under these circumstances, I would be lying to myself and to the voters.”

Nissenkorn, for his part, has turned down all requests for interviews in the run-up to and during the voting – with his first comments on the matter Thursday morning to Army Radio. “Shelly Yachimovitch cannot accept reality,” he said in the interview. “Her egocentric personality, combined with her inability to accept the fact that she lost, is leading the Histadrut to a dangerous place. Let us not allow this irrelevant court decision to deter us from our path.”