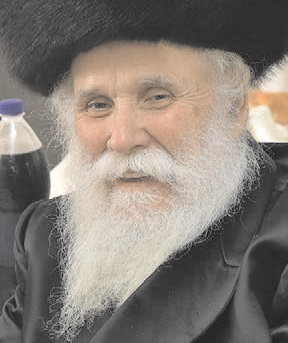 The Gerrer community is mourning the passing of Harav Nachum Kerenvasser, z”l, one of the Roshei Yeshivah of Yeshivas Chiddushei Harim in Tel Aviv and a distinguished Gerrer chassid, who passed away after an illness at the age of 77.

Rav Kerenvasser was born in Tel Aviv in 1940 to his father, Reb Yisroel Moshe, z”l, a respected Gerrer chassid who heeded the call of the Imrei Emes to leave Poland for Eretz Yisrael.

When he reached the age of bar mitzvah, the Beis Yisrael, zy”a, advised him to join Yeshivas Chiddushei Harim in Tel Aviv. The Beis Yisrael took a great interest in his spiritual advancement and would direct him in matters of Torah, yiras Shamayim and serving Hashem with joy. Rav Nachum was only 17 when the Beis Yisrael tasked him with guiding the younger bachurim, and later, as a yungerman, the yungeleit, a role he kept throughout the many years to follow.

He married his Rebbeztin, shetichyeh, the daughter of Harav Michel Aharon Weinberg, z’”l, a prominent Slonimer chassid. Their home in Bnei Brak was always open for whoever desired his guidance and assistance. His family attests that he never disconnected his telephone in order to rest and he that could be reached 24 hours a day.

In 1964, he joined Yeshivas Chiddushei Harim as a Mashgiach. With time, he became a Maggid Shiur and gave daily shiurim. He later became the Mashgiach Ruchani in the yeshivah. He would give a shiur in Beis Yisrael following davening, and a shiur in the Ohr Hachaim Hakadosh on Erev Shabbos, incorporating divrei Torah from the Gerrer Rebbes.

In 2000, he was sent on a special mission to be the Mashgiach Ruchani of the Mesivta Beis Yisrael in the U.S. He traveled overseas and graced the yeshivah for a decade. Upon returning to Eretz Yisrael in 2010, he resumed his post as Mashgiach Ruchani in Yeshivas Chiddushei Harim, a position he kept until his passing.

This past year he fell ill, and he traveled to the U.S. several months ago for treatment. His condition deteriorated, but he always was reenergized at any mention of the Beis Yisrael, and anytime any detail surrounding the Beis Yisrael came up in discussion, it gave him a new lease on life. He passed away Wednesday morning in Maimonides Hospital in Brooklyn.

The levayah began in New York from Mesivta Beis Yisrael in Boro Park, where he was marbitz Torah for a decade. Rabbi Yaakov Aryeh Enden read kapitlach of Tehillim, and hespeidim were given by Harav Yitzchok Meir Tauman, shlita; the niftar’s son, Harav Avraham Mordechai; and the niftar’s mechutan, Harav Dovid Olewsky.

The levayah is scheduled to continue in Eretz Yisrael on Thursday, where it is to set out from Yeshivas Chiddushei Harim in Tel Aviv and pass his home on Baal Shem Tov Street in Bnei Brak on its way to the Ponovezh beis hachaim in Bnei Brak.