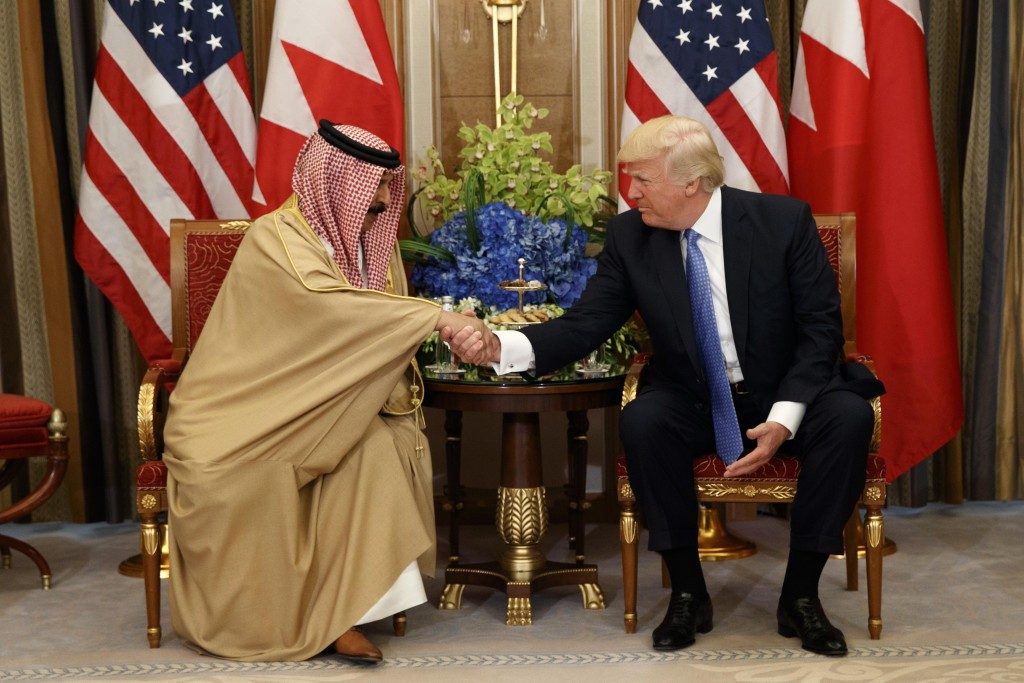 For President Trump and his many supporters, the timing could not have been better.

Just as the ever increasing stream of negative media stories — mostly based on anonymous sources and fueled by a clear-cut media bias — appeared to be reaching a crescendo, he embarked on a multi-country foreign trip, one that, as of this writing, appears to be a spectacular success.

His Saudi hosts pulled out all the stops as they welcomed the American leader. The president was greeted at the airport by 81-year-old King Salman, an honor that was not given to President Obama on his last visit to the country. As the two leaders walked along the majestic red carpet, military jets flying overhead left a red, white and blue trail.

On the way from the airport to his hotel, billboards with large pictures of President Trump and King Salman proclaimed, “Together we prevail.” More than a dozen steeds, alternating between white and brown, flanked the presidential limousine as he was slowly driven to the Royal Court in Riyadh. Trumpets played and soldiers stood at attention as the president walked in.

The president received the kingdom’s highest honor, a gold medallion known as the King Abdulaziz al Saud Collar. At a welcome ceremony in the Murabba Palace, a line of Saudi Arabian men in white robes, holding giant silver swords, chanted rhythmically and waved their swords in the air, as members of the Saudi delegation, dressed in colorful, traditional garb, played music on large drums and strobe lights lit up the sky behind the palace courtyard. It was a traditional war dance, one that is typically performed to celebrate military victory. In this case, according to the Saudis, it was used as a welcoming dance to underscore the friendship the Saudi king was extending to President Trump.

But what was arguably the highlight of the visit — and a most powerful message to his adversaries at home — was the speech President Trump gave at the Arab-Islamic-U.S. Summit. Standing at a lectern in a vast, ornate hall, complete with 11 enormous chandeliers, he shared his thoughts about Islamic terrorism with an audience that included the leaders of more than 50 Arab and Muslim countries and their entourages.

Cognizant of the sensitivities of his listeners, the president told the assembled that the war on terror “is not a battle between different faiths, different sects, or different civilizations,” but rather “between barbaric criminals who seek to obliterate human life, and decent people of all religions who seek to protect it.” He acknowledged that some estimates hold that more than 95 percent of the victims of terrorism are themselves Muslim.

But he minced no words when he described terrorism as a “humanitarian and security disaster in this region that is spreading across the planet,” and “a tragedy of epic proportions,” about which “no description of the suffering and depravity can begin to capture its full measure.”

Much to his credit, and the chagrin of the arch-terrorists in Gaza, the president courageously made it clear in his speech that there is no difference between groups that primarily target Western and Muslim victims, like IS and al-Qaida, and those that primarily target Jews, such as Hezbollah and Hamas. “There can be no tolerating it, no accepting it, no excusing it, and no ignoring it,” Mr. Trump declared, properly lumping all four of these terror groups together.

“The nations of the Middle East will have to decide what kind of future they want for themselves, for their countries, and for their children,” he told the Arab leaders. “It is a choice between two futures — and it is a choice America cannot make for you. A better future is only possible if your nations drive out the terrorists and extremists.

Those in the mass media and his political foes, who have made it their mission to undercut this president from the moment he stunned the pundits and won the White House, will doubtlessly continue to do all they can to try to bring him down. For his strong base of loyal supporters, this trip only underscored what they have been arguing all along.

But for those unbiased Americans who have been wavering on the fence, uncertain of this most unconventional president’s chances, the Saudi visit may suffice to have them look at Mr. Trump with a new perspective. Only with the passage of time will the true facts hopefully emerge from behind the swirling speculation. But in the meanwhile, the message from Riyadh is well worth listening to and internalizing: Despite the feverish hopes of those on the losing side of the most recent election, as of now there is every reason to believe that not only will Donald Trump continue to be president at least until the end of his current term, but it appears that the impact of his presidency will be a considerable one. And as long as he serves as this country’s commander-in-chief, he deserves our respect and full support.