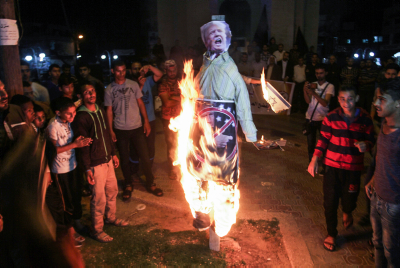 An angry Hamas responded to being tagged as a “terror group” by U.S. President Donald Trump by holding an angry protest rally in Gaza on Monday. Images from the event show masses of thousands of Gazan Arabs burning the president in effigy, trampling on American flags, and displaying posters of Trump that implied that an assassination attempt against him was possible.

President Trump termed Hamas a “terror group” in speeches in Saudi Arabia and in Israel. “Some estimates say that more than 95 percent of the victims of terrorism, are themselves Muslims,” President Trump said in Riyadh on Sunday as he spoke to Arab and Muslim leaders. “It is a tragedy of epic proportions. No description of the suffering can begin to capture its full measure. ISIS, al-Qaida, Hezbollah, Hamas – it must be counted not just in the number of dead, but in generations of vanished dreams.”

In a statement, Hamas accused President Trump of “favoring” Israel, saying that it was “a participant in the Zionist occupation by supplying it with money and weapons to carry out terror attacks against our pathetic people.” In a social media post, Hamas top terrorist Musa Abu-Marzouk rejected President Trump’s comments, decrying “the political blindness that excuses as innocent those who destroy, blockade and kill thousands of innocents in Gaza. And you call Hamas a terror group for defending its people.”

But in the mass rally Monday, different tones were heard, with thousands screaming for “Death to America, death to Israel.” Speakers accused President Trump of heresy and of seeking war with the Muslim world, and Hamas terrorists told the large crowd that it would “never” accept a Trump-imposed peace plan.

In a statement Tuesday, Islamic Jihad also said that it rejected Trump’s comments. “The visit of President Trump to the region and his efforts to forge a new coalition preserves the interests of the occupation. It comes as the prelude for a new ‘nakba’ for Palestinians,” the group said in a statement.