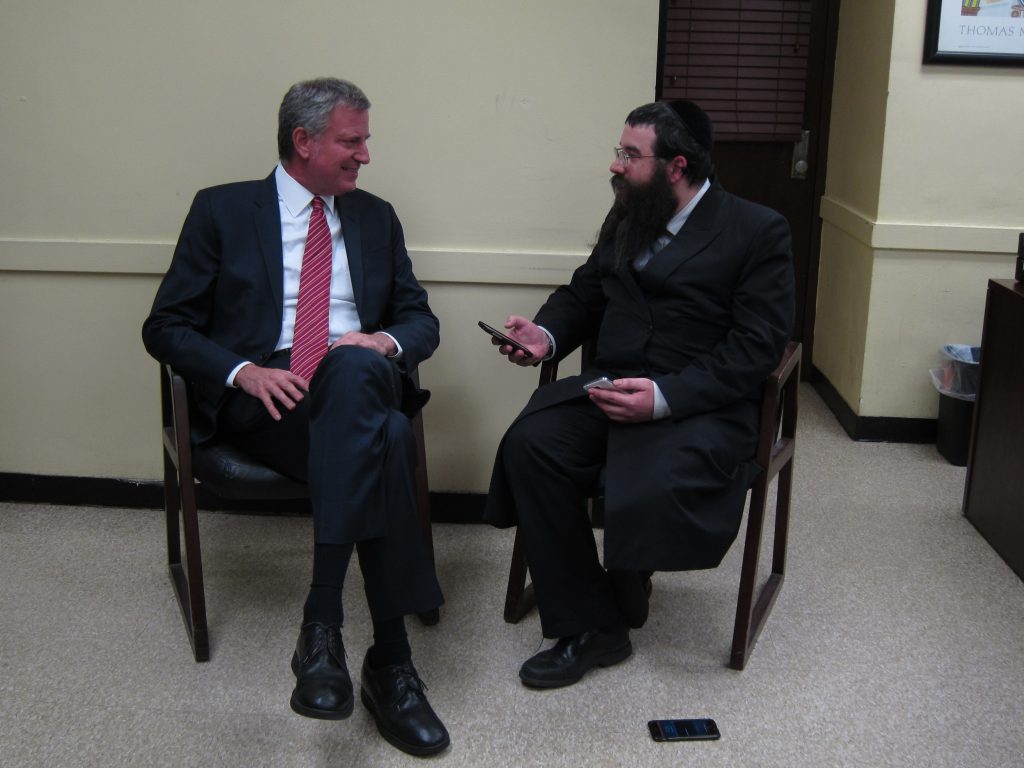 People were standing outside Franklin Delano Roosevelt High School on the outskirts of Boro Park for hours before doors were set to open. It was Mayor Bill de Blasio’s first-ever town hall meeting in the neighborhood, and likely the first-ever meeting a mayor of New York ever had in the district.

Dozens of children on bikes waited outside the 20th Ave. school building for a chance to see the mayor. But he had beat most of them to it. Mr. De Blasio had arrived about an hour earlier for “town hall prep.”

For this yeshivah-educated reporter, the high school appeared vast. The classrooms were roomy, the halls endless. Brightly colored signs were ubiquitous, welcoming the mayor and showing off their students’ progress.

The back rooms, meanwhile, were a beehive of activity. The mayor sat at a desk in one of the offices, a dozen commissioners, deputies and aides surrounding him, briefing him on the unique needs of Councilman David Greenfield’s district. He must be able to respond to several dozen questioners over three hours and residents are expecting him to be up to date.

I came there early as well. Hamodia had long requested an interview with the mayor, and City Hall promised a few minutes of face time ahead of the town hall. The questions were limited to certain topics but, as the mayor said, there will be time for more. There’s a reelection campaign coming up, after all.

Welcome back to your old stomping grounds.

My old stomping grounds; it’s good to be back.

Since you took office close to four years ago, you’ve been experimenting with different ways how to connect directly to the public. This is the 25th town hall since — what, half a year ago?

A year ago or something.

Is this something that will continue if you win reelection?

Absolutely. It’s been an amazing experience. Honestly, we spent the first couple of years trying to get our whole agenda underway. And when you start as mayor of this city, there’s a lot to learn quickly.

But I am a total believer in the town hall meetings. I want to keep doing them. If the people choose to have me continue in this role, I want to keep doing them all the way through. I learn a lot from them. I think it’s a really important opportunity to know what people are experiencing and what they need, but also a chance to express what we’re doing at City Hall. So I’m a believer.

Two of the moves you’ve taken since you took office that have most directly impacted our community, our readership, is changing the garbage collection times to nighttime hours and the security guards for non-public schools. Have the results been in yet about — let’s take the garbage trucks? Is there less traffic during rush hour?

Yeah, from what we’ve seen it’s been a very positive impact, and it stood to reason that trying to put so many of the yeshivah school buses and garbage trucks on the streets at the same time was going to be bad for everyone. That change I think has been very smart, very productive. As a parent, I understood from parents how much concern there was, and it was important that we did something different. We obviously worked closely with the elected officials. So that one, to me, is absolutely a success.

What about the security guards? How has the rollout been? How many yeshivos have applied for that?

The first year we had a great response. I think very productive also. I think the initiative is achieving its intended goal. And we look forward to another year of it and continuing to work with it. I know this was a real concern that so many yeshivos had about security and the cost of security. We found I think a smart formula for addressing that for the largest yeshivos. And I think it’s been a real success.

About the recent rise in anti-Semitism, I know the numbers have been out, anti-Semitism is up sharply, I would say, the past year or two. But aside from the well-publicized rise in criminal mischief, such as the bomb threats called in to JCCs, the cemetery vandalism, has there been a rise of actual, real-life, anti-Semitic crimes? Do Jews need to think twice about going onto the subway more than anybody else, walking down the street?

There are two separate questions. I think anyone in New York City, regardless of background, is living in the biggest, the safest big city in America. We’re the safest big city in America. We’ve added 2,000 police officers on patrol in the last two years. The NYPD is doing extraordinary work driving down crime. I think people can feel very safe in the Jewish community and all communities.

That being said, there has been an increase in anti-Semitic incidents. We take it very seriously. We put a lot of energy into pursuing those who are guilty and making sure they feel the consequences of what they’ve done.

So I think I’m answering the two questions with two different points. Do I think that Jewish New Yorkers can feel safe? Yes, absolutely. Do I think we should take the increase in anti-Semitic activity seriously? Absolutely. I don’t like — I think it’s dangerous — the tone that’s been set as a result of last year’s election. And the best way to respond to it besides condemning it each and every time is to make sure there are consequences for anyone who makes an anti-Semitic act against the community.

If you don’t mind, can I pin you down? Outside of the bomb threat calls, the cemeteries, has there been a rise of people-to-people anti-Semitic crime?

I think that maybe the line that you’re raising is violence versus non-violence.

Vandalism, knocking over a headstone — although those are still crimes, I think you’re saying crimes that might involve danger to a human being. Thank G-d we’ve seen very few of those.

But the reason I’m vigilant is, whenever you see hate speech or hate activity, even if it doesn’t rise to the level of violence, it can never be ignored. But this, again, I feel no question about safety. I think we’re in a position to say Jewish New Yorkers are very safe here.

OK, here’s my last question, you have a couple hundred people waiting for you. I’m looking forward to setting up a formal interview.

I’m a fan of this publication, you know. Had a long, positive history with them. Yeah, I’d be happy to.

Mayoral aide Avi Fink: And they have great rugelach.

Yes, I look forward to more.

And bring Avi along for the rugelach.