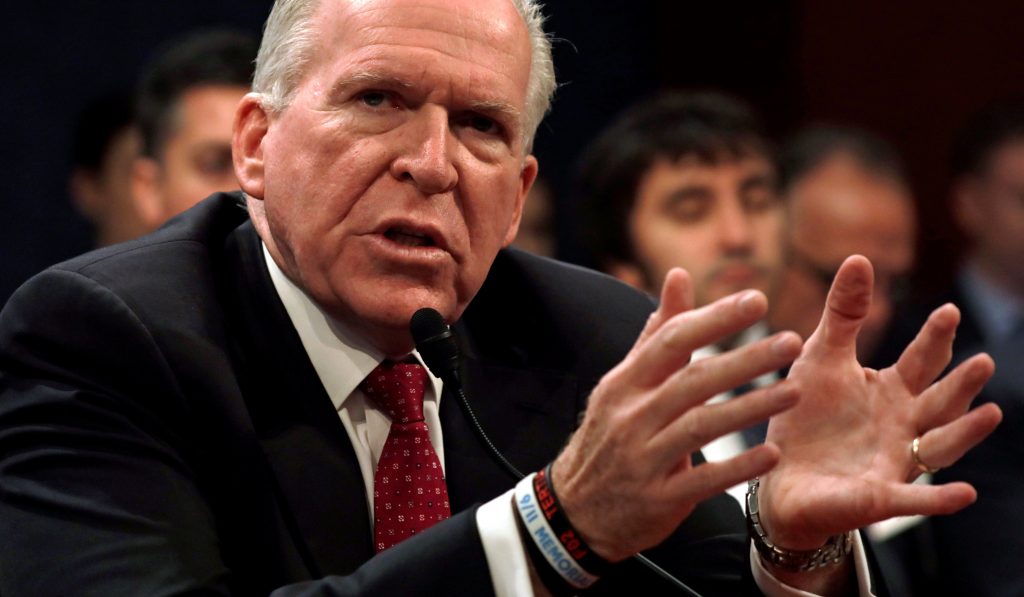 Former CIA director John Brennan said on Tuesday he had noticed contacts between associates of Donald Trump’s presidential campaign and Russia during the 2016 election and grew concerned Moscow had sought to lure Americans down “a treasonous path.”

Brennan, who headed the agency until Trump became president in January, also told a congressional hearing that he personally warned the head of Russia’s FSB security service in a phone call last August that meddling in the election would hurt relations with the United States.

Separately, the top U.S. intelligence official, Dan Coats, sidestepped a question on a Washington Post report that Trump had asked him and the National Security Agency chief to help him knock down the notion there was evidence of such collusion. But Coats did say he has made clear to Trump’s administration that “any political shaping” of intelligence would be inappropriate.

The comments by Brennan and Coats, the Director of National Intelligence, added fuel to a controversy that has engulfed Trump since he fired FBI Director James Comey two weeks ago amid the agency’s investigation into possible collusion between people associated with his presidential campaign and Russia.

“I encountered and am aware of information and intelligence that revealed contacts and interactions between Russian officials and U.S. persons involved in the Trump campaign,” Brennan’s said in testimony to the House of Representatives Intelligence Committee.

Brennan said that he cannot say definitively there was actual collusion.

Brennan’s testimony was the first public confirmation of the worry at high levels of the U.S. government last year over suspicious contacts between Trump campaign associates and Moscow. It was also the most complete account to date of the CIA’s thinking at a time when intelligence agencies were putting together evidence that Russia was interfering in the heated U.S. presidential race to help businessman Trump, a Republican, defeat Democratic Party candidate Hillary Clinton.

Comey was heading the Federal Bureau of Investigation probe into Russian interference and possible collusion with Trump’s campaign, leading to accusations by Trump critics that he has sought to curtail the FBI inquiry.

In another development, Trump has retained Marc Kasowitz, a New York-based trial lawyer who has represented Trump in the past, as his private attorney for special counsel Robert Mueller’s investigation into the Russia matter, a Fox Business Network reporter said on Twitter.

U.S. intelligence agencies concluded in January that Moscow tried to tilt the election campaign in Trump’s favor, including by hacking into the emails of senior Democrats. Russia has repeatedly denied the allegation. Trump has denied any collusion but the FBI and congressional probes into the Russia matter have dogged the early months of his presidency.

“It should be clear to everyone Russia brazenly interfered in our 2016 presidential election process and that they undertook these activities despite our strong protests and explicit warning that they do not do so,” Brennan said.

Brennan said he worried that Russians tried to recruit Americans during the presidential campaign to work for Moscow. Brennan said it was possible for someone to be helpful to the Russian cause without realizing it.

“They (the Russians) try to suborn individuals and they try to get individuals, including U.S. persons, to act on their behalf either wittingly or unwittingly,” he said, adding that “individuals going on a treasonous path often do not realize it until it is too late.”

“I saw information and intelligence that was worthy of investigation by the bureau (FBI) to determine whether or not such cooperation or collusion was taking place,” Brennan replied, but declined to elaborate.

Reuters reported last week that Trump’s fired former national security adviser Michael Flynn and other advisers to Trump’s campaign were in contact with Russian officials and others with Kremlin ties in at least 18 calls and emails during the last seven months of the presidential race.

Flynn was forced out in February for failing to disclose the content of his talks with Sergei Kislyak, Russia’s ambassador to the United States, and misleading Vice President Mike Pence about the conversations.

Brennan said he believed he was the first U.S. official to raise the matter of election interference with the Russians, citing an Aug. 4, 2016 phone call he had with the head of Russia’s FSB, Alexander Bortnikov.

He said he raised media reports of Russian attempts to meddle in the election with Bortnikov, who denied any involvement by Moscow, and told him if Russia pursued this course it would destroy prospects for improved U.S.-Russia relations.

Trump’s public approval ratings dropped to a new low in Reuters/Ipsos poll data released on Tuesday, with 37 percent of U.S. adults surveyed approving of the president while 57 percent disapproving. Support for Trump appears to have dropped among Americans of all political stripes.

At a Senate Armed Services Committee hearing, Coats sidestepped questions about a Washington Post report that Trump had asked Coats and Admiral Michael Rogers, director of the National Security Agency, to help him knock down the notion that there was evidence of such collusion. But Coats did not deny Trump had made such a request.

Coats said that “I don’t feel it’s appropriate to characterize discussions and conversations with the president.”

The Post reported Coats and Rogers declined the request.

Democratic Senator Richard Blumenthal told Coats that the fact he had not denied the Post report should lead to “even more intensive investigation of the alleged effort by the president to enlist you in shutting down, or stifling that investigation.”

“This evidence, if true, goes to criminal intent and constitutes mounting evidence of obstruction of justice,” Blumenthal added.

The leaders of the U.S. Senate Intelligence Committee said they will subpoena two of Flynn’s businesses after he declined to comply with a subpoena for documents in the panel’s Russia probe.