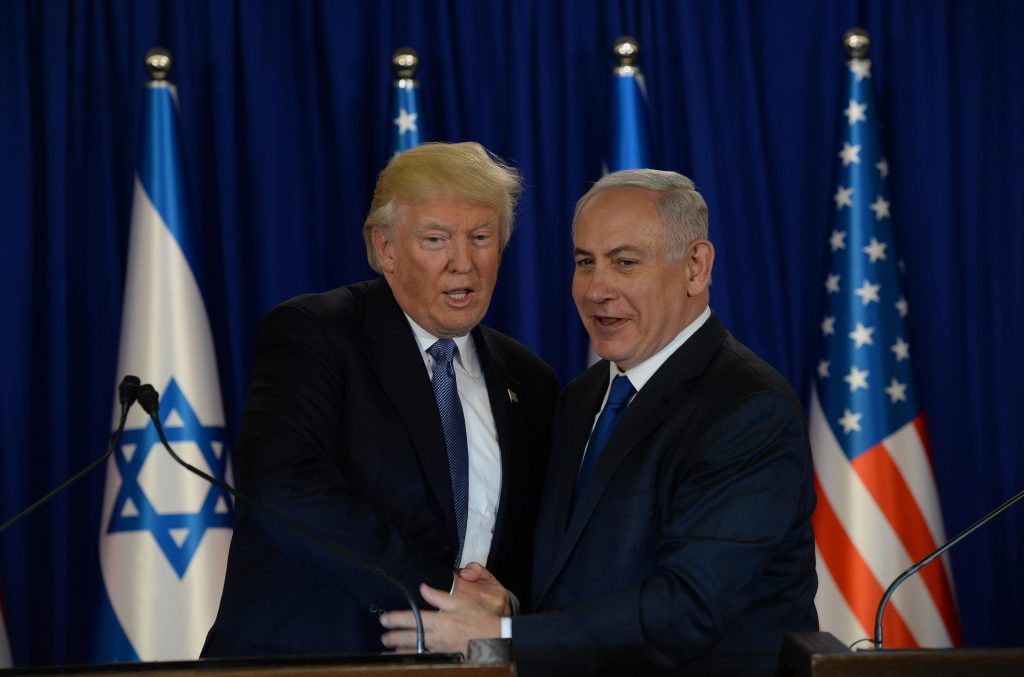 But the first day of President Donald Trump’s trip to Israel concluded Monday near midnight Israeli time with impressive success. It was far beyond what was expected on both sides, mostly on the Israel side.

During the diplomatic talks between them, President Trump and Prime Minister Netanyahu reached understandings on most of the subjects they discussed, chief among them the Iranian issue and continued close cooperation between Washington and Yerushalayim. There is an agreement between the sides with regards to renewing the peace process, but more details will surely become available after the meetings that the president will have Tuesday with Palestinian Authority Chairman Abu Mazen in Beit Lechem.

President Trump will present the conclusions of the talks Tuesday in his speech that he will deliver at the Israel Museum a short time before departing for the next leg of his trip. One thing is already clear: The American and Israeli governments are in lockstep when it comes to the Iranian threat and the need to thwart Iran’s plans to reaching nuclear capability, and with regards to its continued terrorist activity. What remains open is the Palestinian issue, and on this subject, Donald Trump is coming with pressuring warmth, with raised hopes. Reaching a deal between the Palestinians and the Israelis, Trump said, is a matter of importance to America as well; and its hold in the Middle East, he told the prime minister. We won’t pressure you, he added, but we have hopes that you will return to face-to-face discussions, without any preconditions.

In Yerushalayim, these words were taken to be an agreement for dialogue, but that will not happen during the current visit. Donald Trump is here in his other image now, as a dealmaker, as someone who understands the negotiating world. Will his efforts succeed? Time will tell. But there is no doubt that the president came to Israel, and to the entire Middle East, with a list of goals. He will not capitulate before he achieves a significant number of items on that list in his hand. By contrast to previous presidents, he quickly put a solution to the Israeli-Palestinian conflict at the top of his list, and already on his first trip, chose to come to this region and raise the issue.

Prime Minister Netanyahu told President Trump that for the first time in many years, Israel sees a good chance of a breakthrough in the dialogue with the Arab world. President Trump replied, “Yes, I agree, there is a situation today where it is possible to advance many subjects in the entire Middle East, and a peace agreement with Israel and its neighbors and with the Palestinians. During my visit to Saudi Arabia, I met with many leaders from the Arab and Muslim world; and I heard from them that they all want to reach the same goals as ours. Both with peace with Israel and with war against ISIS and Muslim extremists in the whole world.”

At the beginning of the first diplomatic meeting with his guest, Prime Minister Netanyahu had an interesting exchange:

“Mr. President, it’s a pleasure to see you again. I know you went to the Western Wall and you touched the stones of our existence, and you’re the first acting president who’s done that; and I have to express our appreciation not only for that, but also for your friendship for the State of Israel, your understanding of our story, our struggle, our desire for peace — which is all of these things I’d like to talk to you about, including Iran, including Syria, including the Palestinians, including the wonderful cooperation between our two countries, and anything else that you could discuss.”

President Trump: “Well, it’s just been an honor to be here. The Western Wall was just incredible, being there. I spent time, and your folks have been so nice. As you know, I’ve been a big supporter of Israel for a long time. I’ve been a big supporter of yours for a long time. But it’s just a magnificent place, with magnificent people. Many, many friends come from Israel, my great friends come from Israel, and I’m very honored to be here.

“I just left Saudi Arabia. The King… We had an amazing two days, and their feeling towards Israel is really very positive. Tremendous progress has been made. I think a lot of that progress has been made because of the aggression of Iran and it is forcing people together in a very positive way. And if you look at King Salman and Saudi Arabia and others that I was with — the UAE and Bahrain and Kuwait and so many others — it was something. It was very historic, what took place over the last two days. But I could see a much deeper path to friendship with Israel, and I think a lot of that’s spurred on whatever it takes, but a lot of it’s spurred on by what’s happening with Iran. So progress has been made.”

Prime Minister Netanyahu: “I think that the fact that you’ve taken a very strong position on Iran, different position, not only helps security, but also helps propel the possibility of reconciliation and peace between Israel and the Arab world. And that will help reconciliation between Israel and the Palestinians. Of course, not all of that I like to discuss before the cameras; but I do look forward to our discussions, which I think are pregnant with possibility.”

President Trump: “Iran should be very grateful to the United States, because Iran negotiated a fantastic deal with the previous administration — a deal that is unbelievable from any standpoint. Some people don’t understand even how it could be even thought of. And instead of being thankful and saying “thank you,” because they were in serious trouble, and I think they would have failed, totally failed within six months, we gave them a life line, and we not only gave them a life line; we gave them wealth and prosperity, and we also gave them an ability to continue with terror. And with all of the things they’ve been doing. Because no matter where we go, we see the signs of Iran in the Middle East.”

President Trump: “No matter where we go, whether it’s Syria, where we were really forced to shoot the 59 missiles a few weeks ago. No matter what area we’re in, we see Yemen, Iraq, no matter where we are, we see the signs, every sign, whether it’s soldiers, whether it’s money and guns, it’s Iran. And instead of saying thank you to the United States, they now feel emboldened. Maybe they figure the deal was so good, we can do it every time. They can’t do it. Believe me. But it was a terrible, a terrible thing for the United States to enter that deal, and believe me, Iran will never have a nuclear weapon, that I can tell you.”

Prime Minister Netanyahu: “Intelligence cooperation is terrific and has never been better.”

“Welcome to our palace,” Netanyahu welcomed his guest and his family when they arrived in the Rechavia neighborhood of Yerushalayim. He then added, “It’s not a gold plated palace, but we make do with what there is.” That was a hint that Israel is not Saudi Arabia and that the Prime Minister’s residence is not the house of King Salman, and that Israel can’t give President Trump and America what the Saudis can give them.

Last night, the Arab media, especially those stations close to Iran and Hezbollah, hurried to define what happened during the first day of President Trump’s visit to Israel as “From Riyadh to Tel Aviv — One Alliance.” They are disappointed at everything Trump said in Israel, at his harsh attack on Iran and the connection of Hamas, Hezbollah and Islamic State into one package of “dangerous elements in the world that we need to fight against.”

The first day of Netanyahu and Trump concluded with a dinner, preceded by a press appearance with the two leaders. The visiting president once again spoke about the Palestinian matter when he said, “They tell me that the agreement that I am pushing towards is something very hard, but I have a feeling that in the end we will get there. I’m convinced that we will have very productive discussions.

“The State of Israel can do this. This is a land full of beauty, wonders and a spirit of G-d. It is full of moments, holy sites and generous people. Everything is connected to the people. Today we are reaffirming the strong ties of friendship between us, which are built on freedom, on mutual faiths and on the hope that there will be peace for Israel. We want Israel to have peace. We, more than all the friends, we are great allies. We have to take advantage of the situation. There are a lot of things that can happen now that were not able to happen in the past, and we understand this well. This includes growth, fighting terror, and dealing with the Iranian regime, which is threatening the entire region and generates a lot of violence.”

When the meeting was over, Netanyahu said: “We had a terrific discussion today. And when I say terrific, it encompasses everything. We can talk about deregulation; we can talk about economics. I think we quote each other. We understand each other and so much of the things that we wish to accomplish for both our countries.

“But I want to thank you especially today for your deep commitment to Israel’s security, its well-being, and its future. We appreciate the American change towards Iran. The Israeli nation salutes you. I also look forward to working closely with you to advance peace in our region, because you have noted so succinctly that common dangers are turning former enemies into partners. And that’s where we see something new and potentially something very promising. It won’t be simple. But for the first time in many years — and, Mr. President, for the first time in my lifetime — I see a real hope for change.

“The Arab leaders who you met yesterday could help change the atmosphere, and they could help create the conditions for a realistic peace. These are all great signs on your historic visit. I believe that together, we can stop Iran’s march of aggression and terror in the region and we can thwart its efforts to become a nuclear capable state.

That is the conclusion of the first day: A most successful day for President Trump and his Israeli hosts. Washington and Yerushalayim reached understandings on most of the subjects they discussed, chief among them the Iranian issue. President Trump promised Israel that he would prevent Iran from reaching nuclear capability and that he would work together with other nations against Iranian terror. Chief among the topics to be discussed Tuesday will be the Palestinian issue, and then President Trump will conclude his trip to Israel with a speech to its citizens before taking off for the Vatican.