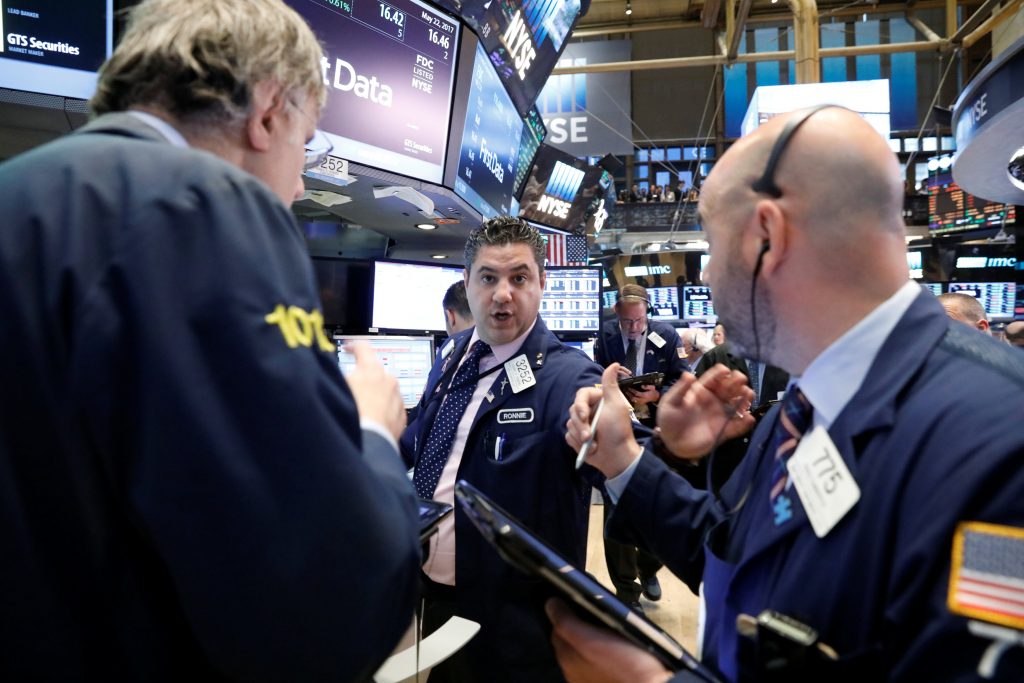 U.S. stocks are higher Monday as software and chip makers and other technology companies climb. Defense contractors are also rising as the market bounces back from a turbulent week. Ford is up after it replaced CEO Mark Fields.

The S&P 500 and Nasdaq both set records early last week before worries about growing political uncertainty in Washington and its potential effects on President Trump’s agenda of tax cuts and deregulation knocked those indexes back from their highs. The S&P 500 is about 1 percent below its highest close, but the Russell 2000, which contains companies that might get bigger benefits from Mr. Trump’s proposals, is down more than 3 percent from the record it set one month ago.

AEROSPACE GAINS ALTITUDE: Aerospace and defense companies climbed after President Trump presided over a $110 billion sale of military equipment to Saudi Arabia. The agreement could expand to $350 billion over 10 years. It appeared to reverse an Obama administration to pause sales of precision-guided munitions to the kingdom. Lockheed Martin climbed $4.30, or 1.6 percent, to $277.09 and Boeing increased $2.81, or 1.6 percent, to $183.57. General Dynamics rose $1.98, or 1 percent, to $197.85.

DRIVEN OFF: Ford replaced CEO Mark Fields as the automaker struggles to keep the traditional parts of its business running smoothly while it remakes itself as a nimble, high-tech provider of new mobility services. Fields was CEO for three years, but under his leadership popular cars like the Fusion sedan became dated and Ford lagged competitors in bringing long-range electric cars to market. New CEO is Jim Hackett, who has led Ford’s mobility unit for more than a year.

CHEMISTRY: Swiss specialty chemicals maker Clariant and Huntsman Corp. are merging to create a company with a market value of $13.8 billion. The company will call itself HuntsmanClariant and Clariant shareholders will own 52 percent of the new company. Huntsman stock slid 42 cents, or 1.6 percent, to $26.29 and Clariant stock rose 3.4 percent in Switzerland.

METAL TESTED: Arconic jumped after the aluminum products company ended a contentious proxy dispute with activist investor Elliott Management. Elliott will get more input as Arconic picks its next CEO, and it will nominate three directors to the company’s board. Arconic agreed to nominate two others, and a third board member resigned and was replaced by a candidate Arconic chose. A month ago, Klaus Kleinfeld was ousted as Arconic’s chairman and CEO after he sent a threatening letter to Paul Singer, Elliott’s founder and Arconic’s largest shareholder.

BONDS: Bond prices moved a bit lower. The yield on the ten-year Treasury note inched up to 2.25 percent from 2.24 percent.